Will Abbas intervene to save Nablus from mayhem?

The situation in the streets of Nablus has become very dangerous in light of the chaos and security unrest, while Palestinian officials exploit the situation to settle political scores. 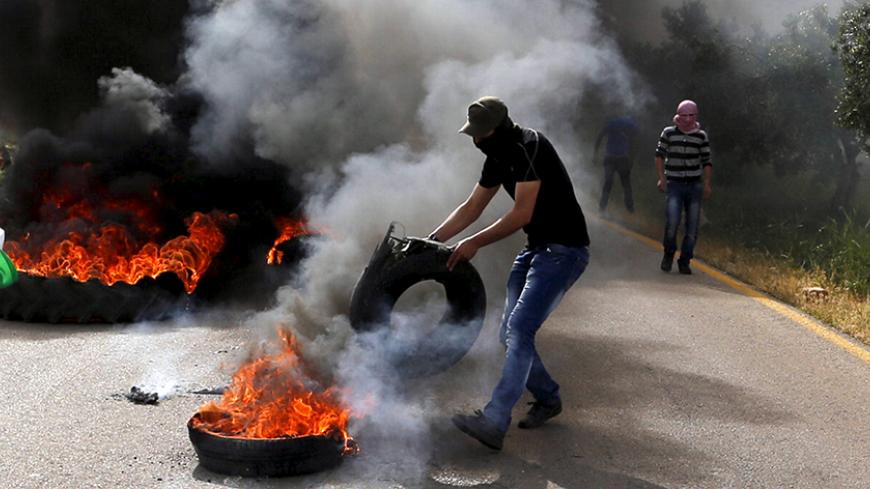 A Palestinian protester sets a tire ablaze during clashes with Israeli troops in the West Bank village of Duma near Nablus, April 5, 2016. - REUTERS/Ammar Awad

The Nablus governorate in the north of the West Bank has been witnessing security unrest since February, including street shootings, tires being set on fire and the closing down of public institutions.

Numerous reasons have led to this unrest. On March 9, young men closed down schools and blocked the main streets in the city of Nablus, and national figures declared a public strike in Askar refugee camp to protest the Palestinian Authority's (PA) neglect of the issues inside the camp and the marginalization of its residents.

On May 2, the residents of some villages in Nablus governorate, such as Deir al-Hatab and Azimut, set tires on fire to protest against the Nablus municipality’s intention to construct a water purification plant, which they believe would destroy their last breathing space.

On June 1, unidentified armed men sprayed with bullets the house of Ghassan al-Shaka, a member of the Executive Committee of the Palestine Liberation Organization. No injuries were reported, but the house sustained extensive damage as a result of the direct fire and broken windows. On the same day, hooded men closed off Rafidia Street in the center of Nablus, setting tires on fire, to protest against the marginalization by the municipality of the Rafidia neighborhood.

On the evening of June 10, unidentified men attacked the Greek Orthodox monastery complex of Jacob's Well in Nablus. The attack included an attempted assault of the head of the monastery, Archimandrite Justin Mamalos. The reason remains unknown.

Tayseer Nasrallah, a Fatah leader from Nablus and Fatah member of the Palestinian National Council, told Al-Monitor, “The recent security disturbances in Nablus are due to the poor social and economic situation, especially after the cutbacks by UNRWA [United Nations Relief and Works Agency for Palestine Refugees in the Near East] of its services at the end of May 2016. Nablus was under an Israeli blockade from the outbreak of the Al-Aqsa intifada in 2000 until 2012. Its refugee camps are plagued by poverty and unemployment. This pushed some of the citizens to resort to violence by blocking roads, carrying out public shootings and burning tires. These acts must be contained, otherwise Palestinian society will slide into the abyss.”

The events in Nablus coincided with the decision issued by Palestinian President Mahmoud Abbas on June 7 to reinstate Maj. Gen. Akram Rajoub as governor of Nablus; he had been fired on April 27.

Several Palestinian news websites revealed April 28 that Rajoub was dismissed for abruptly leaving a Samaritan community Passover seder service in Nablus on April 21 due to the arrival of Israeli settlers, a move that the Samaritan community saw as offensive, which led Abbas to dismiss him.

A Palestinian official in the Palestinian Cabinet told Al-Monitor on condition of anonymity, “Rajoub was not dismissed for leaving the Samaritan service or for lacking competence. He is the former head of the Preventive Security Service in the West Bank. Since early 2016, he has been publicly accusing Palestinian high-level figures — especially from the Fatah Central Committee — of stirring up tension in Palestinian internal relations. This is inappropriate behavior for a governor. The president had summoned him in February and asked him to stop his accusations.”

The official added, “In early June, President Abbas reinstated Rajoub as governor. However, he maintained his dispute with those in the high-level Palestinian leadership, in particular with Tawfiq Tirawi, a member of the Fatah Central Committee and former General Intelligence director in the West Bank.”

The dispute between Rajoub and Tirawi emerged when Rajoub announced a crackdown in Nablus in March 2015 on armed outlaws, which led to the outbreak of armed clashes between these outlaws and the security forces. Tirawi believed this crackdown was targeting him given his family ties with some of these armed men.

These successive security developments in Nablus pushed local figures to express concerns about the seeming chaos across the governorate, which has reached very disturbing levels. The governorate seems to be heading toward serious unrest. The situation now requires a firm decision to enforce the law, in light of the deterioration of the security situation given the absence of law, the proliferation of weapons and chaos in the streets.

On June 2, Fatah leader Maj. Gen. Abdul Ilah al-Atiri sent a letter to Abbas, urging him to intervene to save Nablus. “The people are terrified, anxiety is prevalent on the street, shootings are carried out daily, roads are blocked and tires set ablaze at every corner. Political scores are being settled in Nablus between PA officials,” the letter read, without explaining the nature and background of the tension.

Abdel Sattar Qassem, a professor of political science at An-Najah University, told Al-Monitor, “The PA is responsible for the chaos plaguing Nablus. It is sending armed men into the streets and turning a blind eye to those committing illegal and criminal offenses. Israel is providing [these armed men] with weapons since it is confident that these weapons will not be used against it. Armed men walk around the streets in front of [surveillance] cameras and they are not detained by Israel. They hide whenever the Israeli army enters the city. I do not think that the reappointment of the governor will restore security to Nablus because there are influential parties from among PA officials interested in maintaining this chaos.”

The security development in Nablus is extensively covered on social media sites. On June 12, Nablus-based spokesman for Hamas Husam Badran wrote a post on his Facebook account stating that the disputes being stirred up among the residents of the city of Nablus, its refugee camps and nearby villages are an attempt to sabotage Nablus’ coherent social fabric, describing those behind the unrest as outcasts.

In a Facebook post on June 1, social media activist Hussein Mahyar called on the leaders in Nablus to put an end to the robberies, shootings, roadblocks and the burning of tires, which he described as a systematic and deliberate policy aimed at destroying Nablus.

Samer Khwaireh, a journalist from Nablus, told Al-Monitor, “The security situation in Nablus is shaky because Palestinian leaders are settling their scores [in the streets]. They want to impose facts on the ground that would increase their influence at the expense of others. Weapons are widespread in the city and shooting incidents are on the rise. The PA is unable to issue stringent judgments against individuals and groups conjuring up this lawlessness and chaos.”

“Yet the situation in Nablus is better than in other West Bank cities — especially Jenin — where complete mayhem broke out a few weeks ago, and where shootings are carried out daily and the Palestinian internal security unrest has disturbingly increased the death toll,” he said.

There is no silver bullet to end the security chaos in Nablus, in light of the complex interests of the disputing parties from among PA officials.

This means that the insecure situation is likely to continue. Israel is keeping an eye on the situation on the ground in the city and seeks to maintain the ongoing Palestinian polarization, in a bid to continuously weaken and undermine the PA.

On the other hand, within the Palestinian circles many are talking about who will succeed Abbas, even though the date of the elections has not been set yet. It seems that each group within the PA is striving to gain more power, in light of the nomination of prominent Fatah leaders to assume the presidential seat, such as Mohammed Dahlan, Marwan Barghouti and Jibril Rajoub, each of whom has his own interests.