Palestinian security forces have launched a broad campaign against armed individuals in Nablus, leading to clashes resulting in the killing of five people, including two security team members. The apparent extrajudicial killing of one suspect has deeply angered Nablus residents. 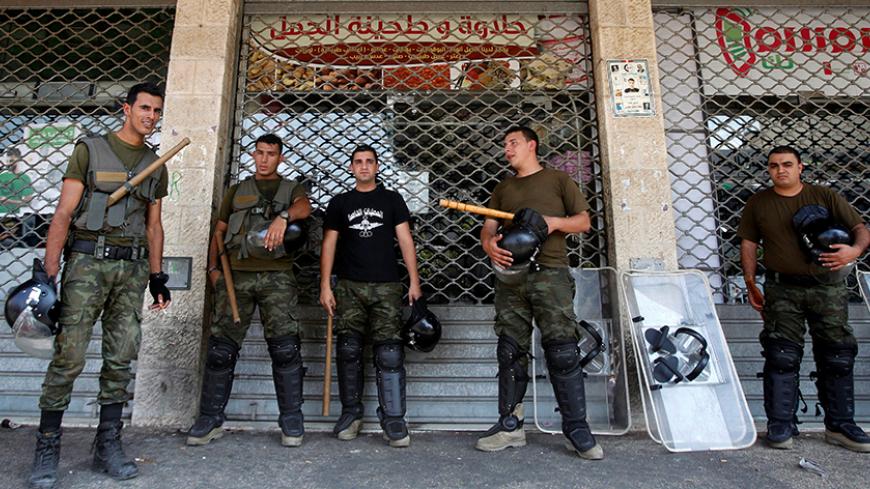 RAMALLAH, West Bank — Security unrest has been plaguing the city of Nablus in the northern West Bank since Aug. 18 as a result of a broad security crackdown launched by Palestinian security forces in the city and sporadic armed clashes between gunmen in the city’s old town, resulting in the death of five people.

Prime Minister Rami Hamdallah, who also serves as minister of interior, said Aug. 19, “The leadership and the government are determined to root out the outlaws from the city of Nablus, along with those who are violating civil peace in order to prevent security chaos from returning.”

The security institution sent large military reinforcements to Nablus’ old town following a decision by President Mahmoud Abbas and Hamdallah on Aug. 19. As a result, Khalid al-Aghbar and Ali Halawi — whom the security services said were “suspects in the death of the two security members” — were killed the next day.

On Aug. 24, the shops in the old town of Nablus closed their doors for the second day in a row to mourn the death of Halawi; Halawi’s family announced in a press release issued on the evening of Aug. 23 that it will not bury their son until those responsible for his death are held accountable.

The governor of Nablus, Gen. Akram Rajoub, told Al-Monitor that the exceptional circumstances that prevail in Nablus were caused by the Aug. 18 shooting. He stressed that the political and security decision was to strengthen security and stability. Meanwhile, the Palestinian government announced Aug. 23 the formation of a committee to investigate the killing of Halawi and reveal the results to the public. Damiri said a military trial will be held for each officer who participated in the beating and killing of Halawi.

“The Palestinian Authority [PA] is targeting illegal weapons in the city and we have seized large quantities of weapons and ammunition threatening the lives of citizens. This has prompted the decision to move forward in the fight against security chaos,” Rajoub said.

The PA claims it is seeking to establish order in Nablus and fight outlaws through its wide security crackdown. But some argue that the Palestinian security forces have violated the law; Aghbar’s family accused the security forces of arresting their son and then killing him, without trial and investigation, and demanded the formation of an independent investigation committee.

The public had sympathized with the security forces after the killing of the two officers, but it then turned against them and the government for violating the law after the killing of Halawi. On Aug. 23, thousands of citizens rallied in Nablus to express their anger toward the security forces, demanding the departure of both Hamdallah and Rajoub. However, the security forces dispersed the protesters by throwing tear gas, which resulted in confrontations between the two sides while a number of anonymous masked gunmen closed the shops in the city as a sign of mourning. Meanwhile, the Independent Commission for Human Rights considered Halawi’s death a crime and an extrajudicial killing that represents a grave violation of Palestinian law and all criteria for the use of power.

Najat Abu Bakr, a Fatah member of parliament from Nablus, told Al-Monitor, “The situation in Nablus requires an intervention by the presidency and the government in order to stop the militarization of the city by the security services, especially since those who sympathized with the security forces in the past are now angered by Halawi’s killing.”

She said, “No citizen may be arrested and killed without being questioned, as citizens are claiming that the security forces want to kill all the wanted individuals and not simply arrest them.”

For his part, Jamal Tirawi, a member of Fatah’s Revolutionary Council and member of parliament for Nablus, told Al-Monitor, “The killing of Halawi was wrong and a major violation by the security forces. It contradicts what was agreed upon with the prime minister Aug. 22 when he pledged before legal institutions and figures in Nablus not to allow the occurrence of abuses by the security officers when applying the law.”

This is why Nablus’ legal institutions and figures issued a statement Aug. 23 stressing that Halawi’s killing was an unjustifiable crime that violates the agreement they had with Hamdallah, calling for the formation of an independent committee to investigate his killing and putting an end to all violations committed by some security officers, in addition to setting conditions for a state of emergency in the old town.

On June 30, two security officers had been shot dead by armed men in Nablus, which prompted Abbas to instruct the security forces to eliminate all weapons from the West Bank by seizing them and arresting gun owners. The security crackdown is likely to continue in Nablus, although no one knows where it will lead.