Increased demands from within Fatah to dismiss Hamdallah

Tension prevailed over ties between some Fatah members and Prime Minister Rami Hamdallah, particularly since Ahmed Halawa was beaten to death by security forces in Nablus, which prompted many Fatah leaders to demand that Hamdallah be dismissed from his post. 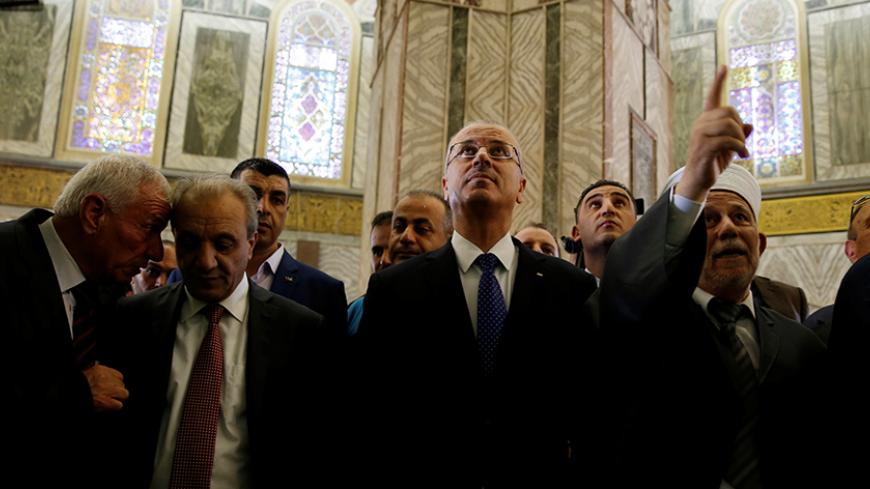 Palestinian Prime Minister Rami Hamdallah (C) stands inside the Dome of the Rock during his visit to the compound during the holy month of Ramadan in Jerusalem's Old City, June 18, 2016. - REUTERS/Ammar Awad

RAMALLAH, West Bank — On Aug. 23, former Fatah leader Ahmed Abu al-Ezz Halawa was beaten to death by Palestinian security forces in Nablus, in the northern West Bank. His killing has sparked anger against the government, which was reflected in thousands of people, including Fatah leaders and members, taking part in his funeral Aug. 28. During the funeral, slogans were chanted against Prime Minister Rami Hamdallah and Nablus Governor Akram Rajoub, calling for their dismissal from their posts. This stance was also endorsed by Halawa’s family and a number of Fatah leaders.

Fatah member of parliament Najat Abu Bakr, who took part in the funeral, told Al-Monitor, “Fatah has serious reservations on the government's performance and practices, the latest of which was the killing of Halawa.” She added, “Halawa’s wife told me in person that Hamdallah is primarily responsible for the killing of her husband.”

Abu Bakr said, “Hamdallah should submit his resignation, admit his failure and give citizens some dignity. Had I been in his shoes, I would have resigned immediately. The people of Nablus and Fatah leaders in the city have demanded that the government resigns.”

Although Hamdallah announced Aug. 23 the formation of an inquiry commission into the Nablus incident, some Fatah leaders have not been satisfied and viewed that a presidential commission, including members of parliament as well as other social figures and members of the military judiciary, should have been formed instead of the inquiry commission that consists of ministers in the government, which is a party involved in the crisis.

Jamal Tirawi, a Fatah parliamentarian from Nablus and member of its Revolutionary Council, told Al-Monitor, “We have demanded that members of the Palestinian Legislative Council [PLC] assume a role in the inquiry commission, along with the various supervisory authorities. Yet the decision was issued by Hamdallah in his capacity as minister of the interior, which is contrary to the law, because he is a party to the incident.”

The Nablus incident is just the latest in a series of events that have led to resentment among Fatah’s leaders and members. Most prominently is Hamdallah’s order to use security forces against Fatah leaders and members in the city of Tulkarm in the northern West Bank during a protest against the electricity crisis in July and August. As a result, security forces arrested a number of Fatah members, which prompted several Fatah members to resign in protest against the arrests and against security forces beating Ibrahim Khreisheh, a member of Fatah's Revolutionary Council, on Aug. 5.

Fatah and Hamdallah have clashed several times. On Nov. 6, 2014, the security forces arrested Bassam Zakarneh, the former head of Palestinian Public Sector Employees and member of Fatah’s Revolutionary Council, on charges of inciting against the government.

On Dec. 4, 2014, Hamdallah and Azzam al-Ahmad, a member of Fatah’s Central Committee, had a confrontation on the air during a talk show on al-Falastinia TV. Hamdallah accused Ahmad of nominating his sister-in-law to the post of education minister.

In February, Abu Bakr staged a sit-in inside the PLC because an arrest warrant was issued against her for accusing a government minister of corruption, despite her parliamentary immunity.

Tirawi said, “What is taking place on the ground proves that there is a major rift between Hamdallah and Fatah’s members and some of its leaders. Thus, we call on preventing security services — which are under Hamdallah’s responsibility — from oppressing Fatah.”

He added, “If the results of the inquiry commission — which was formed by Hamdallah — are not convincing, Fatah will reject them and will raise its voice for Palestinian President Mahmoud Abbas to hear it.”

Zakarneh told Al-Monitor, “Tension prevails over the Palestinian street, because of the instructions given to the security services by the person in charge of them — namely Interior Minister Rami Hamdallah — who should assume responsibility for what is taking place.”

By contrast, close ties between Hamdallah and Abbas seem to be Hamdallah’s guarantee that he will preserve his post. In an Aug. 27 interview on Maan TV, Hamdallah said, “I refer to Abbas and we are fully coordinating together. He was consulted on all decisions that are being taken.”

Writer and political analyst Talal Okal told Al-Monitor, “There is a tendency to promote the role of security services at the expense of Fatah, and to treat all Palestinian factions — including Fatah — equally, despite being the ruling party.”

He added, “Fatah is unable to apply pressure to remove Hamdallah from his post of prime minister, which is a decision that can only be taken by Abbas.”

Fatah went through a similar experience under the rule of former Prime Minister Salam Fayyad, who served as prime minister from 2007 to 2013. On March 3, 2011, Fatah demanded that Abbas dismiss him. Yet he remained in office until Abbas decided otherwise. This means that the good ties between Abbas and Hamdallah will guarantee that Hamdallah remains in his post for a long time.