PA clamps down on security amid unrest in West Bank

Recent clashes in the West Bank between security officials and protesters have triggered Palestinian fears that stability will be difficult to restore. 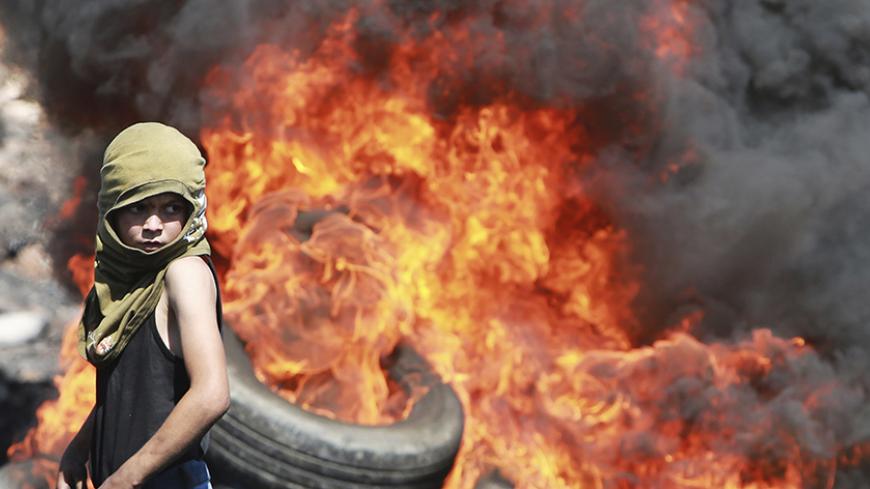 A Palestinian boy looks on near burning tires during clashes with Israeli soldiers following a protest against the nearby Jewish settlement of Qadomem, in the West Bank village of Kofr Qadom near Nablus, Sept. 19, 2014. - REUTERS/Abed Omar Qusini

At the beginning of February, armed clashes broke out between the Palestinian security apparatuses and what they called “wanted armed groups” in the Balata refugee camp near the city of Nablus in the West Bank. Though the Palestinian Authority (PA) says these groups are arms or drug dealers, the camp's officials deny this. Al-Monitor learned that these groups belong to the Fatah movement.

The clashes once again sparked a debate on the return of chaos and lawlessness to the West Bank, though the crisis ostensibly ended when 10 young men handed themselves over to the security services on Feb. 12.

Palestinian political and security circles have expressed concern over the possibility of new chaos, as Prime Minister Rami Hamdallah chaired a meeting on Feb. 6 to inform Nablus' security leaders about the latest security developments in the Balata camp.

Meanwhile, on Feb. 21, President Mahmoud Abbas said, “We will not allow the return of chaos, as some have been seeking to foment disorder. We will not allow anyone to undermine security and stability.”

Palestinians have divergent opinions about why citizens and security forces are clashing in the West Bank, especially in the Palestinian camps. During the clashes, individuals throw stones and security forces throw tear gas, as happened at the Nur Shams camp in early February. While the PA states that several parties are working to foment chaos, other groups, such as Hamas and Fatah-affiliated figures, say that the PA has used this pretext as a “scarecrow” to tighten its grip on security.

During a Feb. 16 press conference attended by Al-Monitor, security apparatus spokesman Maj. Gen. Adnan al-Damiri accused many parties of seeking to ignite the situation in the West Bank. “Hamas, Israel and Mohammed Dahlan’s group have agreed to stir up chaos in the West Bank and to get rid of President Abbas,” he said.

The PA and Hamas have exchanged accusations about the ongoing developments. Member of parliament Ismail al-Ashqar, chairman of the Palestinian Legislative Council's Security Committee, accused Abbas and Hamdallah of being responsible for the security chaos in the West Bank, and of attempting to export this situation to the Gaza Strip.

The PA, on the other hand, believes that Hamas is attempting to carry out a “coup” in the West Bank, similar to what happened in Gaza in 2007. “The Palestinian security is strong enough to counter such attempts,” Damiri said, referring to “Gaza’s coup, which will never play out once again no matter what.”

On June 7, 2007, the Gaza Strip witnessed violent confrontations that turned into a civil war between Hamas, Fatah and the security apparatuses. The war resulted in Hamas taking over all the security and political institutions in Gaza, which prompted Abbas to declare an emergency state in the Palestinian territories

Samira al-Hulaiqa, a Hamas leader and Palestinian Legislative Council member of parliament, told Al-Monitor that the PA and Damiri’s accusations of Hamas are “baseless,” and suggested that the PA provide proof demonstrating any violations against the PA in the West Bank. “The PA is used to making accusations against Hamas and being hostile toward it, as it is its rival on the Palestinian street. The PA is adopting an approach that is not in line with its policy,” she added.

The PA’s accusations are not limited to Hamas only, as they also include Israel and Dahlan, Fatah’s dismissed leader. “Chaos only serves the interests of the occupation forces seeking to blackmail the PA,” Damiri said.

“There is no arms market in Palestine, except for the black market financed by Israel. Who is paying for the bullets that are being shot in the air every now and then, knowing that the price of an M16 bullet is $2 and that of a Kalashnikov is $6? Who is funding weapons, knowing that 12,000 bullets have been shot in the air in just a few days?” Damiri said in reference to the recent shooting that took place at the Balata refugee camp. The Nablus governor said that armed men shot bullets worth $1,300 on a daily basis.

There have been recent shootings in the West Bank, while funds have been confiscated and security apparatus vehicles set on fire. This coincided with security chaos in Gaza. In a Feb. 19 press statement, the Ramallah governorate stated: “People involved in acts of assaults have been arrested, while some documents and computers containing information proving their involvement in planning acts of incitement and other crimes have been seized.”

On that same day, a security officer stormed into the Ramallah offices of Majid Abu Shamala and Alaa Yaghi, two members of parliament in the Palestinian Legislative Council who are close to Dahlan. This is in addition to the arrest of the office manager Hazem al-Tatar.

According to the PA, its security campaign in the Balata refugee camp has targeted "weapons and drug dealers" — a statement rejected by the people and officials of the camp. Jamal al-Tirawi, a Fatah member of parliament and camp leader, told Al-Monitor that the PA’s accusations are "baseless and reflect the policies of some security and conservative parties to hide their … failure and weakness."

“Describing young men as drug and weapons dealers reflects a suspicious agenda, and reveals the plot to destroy the camp, and to draw people’s attention to internal crises, which would only benefit the occupation forces and the people with personal interests to serve,” he added. Many of the people who have been accused by the PA turned out not to have any criminal background, according to Tirawi.

Rumors have also circulated that those creating conflict are linked to Dahlan. “Saying that a plan to foment chaos is underway reflects the stupidity of some people, who are making false accusations about the president to depict the Palestinian arena as being tense and plagued with divisions, while the entire camp supports Abbas and the national project,” Tirawi added.

"Allegations that the camp people are linked to Dahlan are mere excuses by some who are planning for a plot, which we have uncovered. We submitted a comprehensive file on this matter to Abbas so that he is aware of the lies and misleading information that have been disseminated. In fact, the allegations that the camp people are receiving money from Dahlan were made by one security official under a fake name, who made a statement on a social media site,” he said.

Tirawi also said that the residents of the refugee camp are living in a tragic situation and suffer from marginalization, unemployment and poverty. Furthermore, the absence of government and security programs makes citizens feel that they are constantly subjected to social humiliation and injustice.

Hulaiqa said that clashes in the West Bank have arisen because people do not support the PA's policies and its security coordination with the Israeli occupation forces, not to mention the existing differences between the leaders in power.

In January, confrontations broke out between the PA security forces and people in the Nur Shams camp and lasted several days. Protesters blocked the streets by burning tires to protest against poor electricity services, before the situation was contained.

Palestinians live in constant fear of a return to lawlessness. They also fear that the PA would allow a state of chaos to continue, only to tighten its grip on the public for expressing different political views or accuse those protesting its policies of making false accusations.