With security tensions on the rise in the West Bank, there is talk of conspiracy in which Hamas, Israel and ex-Fatah official Mohammed Dahlan are spreading chaos with the goal of toppling President Mahmoud Abbas. 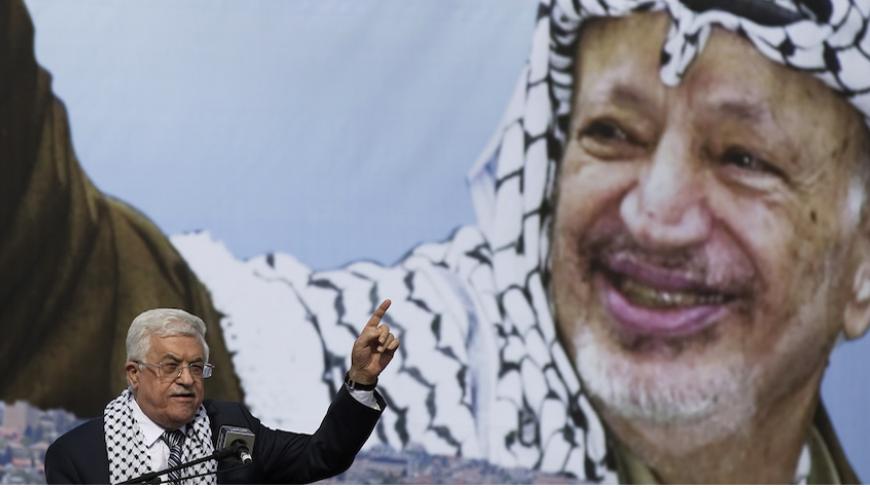 Palestinian President Mahmoud Abbas gestures beneath a poster of the late Yasser Arafat, during a rally marking the 10th anniversary of Arafat's death, in Ramallah, Nov. 11, 2014. - REUTERS/Finbarr O'Reilly

The West Bank is witnessing unprecedented security tensions. The Palestinian Authority (PA) has been arresting Hamas activists and partisans of ex-Fatah leader Mohammed Dahlan, and armed clashes between the youth and security officers have taken place.

Al-Monitor was able to secure a copy of the statement issued by one of Fatah’s organizational structures close to Dahlan, which read: “The PA arrested more than 20 supporters of Dahlan and attacked the offices of the Gaza members of parliament who live in the West Bank.”

During an interview with Al-Monitor, Hamas spokesman Hossam Badran called for “ending the PA’s violations and the political arrests targeting Hamas, among others. The PA is fighting each patriotic person and pursuing those who resist occupation.”

Maj. Gen. Adnan al-Damiri, spokesman for the PA’s security apparatus, accused Israel, Hamas and Dahlan on Feb. 16 of conspiring together to stir chaos in the West Bank by forming groups to end the PA’s presence and get rid of President Mahmoud Abbas. But what he described as “the Gaza coup” — meaning when Hamas took control of Gaza in mid-2007 — will not happen again, he said.

The security developments in the West Bank are not limited to a pursuit here and an arrest there. The PA is concerned about a local, regional and international scenario to turn Abbas’ page, given his multiple disputes with everyone, from Hamas to Dahlan and Israel. Fatah spokesman Osama al-Qawasmi said the PA seems to believe that these rivals might unite their interests temporarily to get rid of Abbas.

Abbas cannot be envied for the situation he's in. He is fighting along several fronts, be they internal, with Hamas and Dahlan, or external, with Israel. Perhaps if he had resorted to a strategy to solve crises instead of fueling them — by withholding the Hamas employees’ salaries, pursuing Dahlan’s supporters in the West Bank and freezing the latter’s money in the Gaza Strip — he would not have been under these threats, as his partisans call them.

Fatah and parliament member Alaa Yaghi, who's close to Dahlan, warned on Feb. 27 of the deterioration of the security situation in the West Bank if the PA’s security campaign persists. The situation will worsen, just like the incidents in Gaza that led to the division in 2007. He said the security campaigns in the West Bank are based on a conspiracy theory and on spreading rumors that a huge network is attempting to stage a coup against the PA.

In the same context, a high-ranking official who frequently visits the PA’s headquarters, told Al-Monitor on condition of anonymity about “simmering deliberations between senior Palestinian officers against the backdrop of growing tensions in the West Bank. Some of the PA’s high commands are deeply concerned about the recent behavior of some senior officers with Abbas.”

In a phone interview from Ramallah, the official said: “Abbas received information stating that some high-level security officials are reporting to the US and Israel the details of the political steps he intends to take. Upon receiving these reports, the US and Israel warn him of the danger of taking such steps.”

However, Ismail al-Ashqar, Hamas leader and chairman of the Palestinian Legislative Council's Security Committee, told Al-Monitor: “Abbas is to blame for the security chaos in the West Bank as it is in a state of loss and devastation. This could be a systematic sort of chaos that the PA is practicing to prevent Palestinians from defending themselves from the occupation’s soldiers.”

Al-Monitor has discussed that the increasing security tensions in the West Bank are annoying Abbas. Israel is threatening to cut him off and stop transferring funds to the PA’s treasury. He is afraid to see the scenario of Yasser Arafat repeated. Arafat was dismissed based on an Israeli decision and with the help of Palestinian pawns.

For this reason, Abbas is making significant changes in some security positions, especially those close to him, until he receives a verification of the reports about high-ranking officers playing a role in attempting to topple him. In the wake of the recent meeting of the PLO’s Central Council March 4-5 in Ramallah, the PA issued security warnings about a dirty game aimed at disturbing the Palestinian internal situation to weaken Abbas and make him lose credibility before the international bodies he is resorting to.

Al-Monitor received a Palestinian security report submitted to Abbas end of February that stated: “Political money is overflowing in the West Bank to make transitions that suit the interests of some parties and that serve suspicious foreign agendas to shake stability and security in the West Bank, in cooperation with Israel, Arab and European parties and with the US blessing. … Arab capitals accommodated meetings at governments’ headquarters and intelligence centers during which the terms of a plan to recommend an interim PA president and deputy were discussed. The first step would be by shaking the West Bank’s security to wreak havoc and form armed groups in the camps there.”

Prime Minister Rami Hamdallah said Feb. 6 that no party will be allowed to destabilize the West Bank or cause chaos and harm to the security of its citizens. But several refugee camps in the West Bank — especially the Balata refugee camp in Nablus — have been experiencing armed clashes between young Fatah members and security officers who tried to break into the camp to arrest them. Masked men burned tires at the entrance of the camp to prevent the advance of the officers who used their weapons multiple times.

A Palestinian security source who spoke on condition of anonymity told Al-Monitor, “News has been circulating in Balata camp that 50 gunmen ages 18-22 are in contact with Fatah leaders in the West Bank and abroad with Dahlan who funds them."

All this is happening when more meetings between Arab and Western diplomats with official and nongovernmental Palestinian figures are taking place in the West Bank. Al-Monitor learned from officials, who were interviewed on condition of anonymity for security reasons, that some meetings are taking place in public venues such as hotels and institutions, and others in the homes of those involved, to discuss the developments of the Palestinian situation and predict its future developments.

The current security tensions recall the situation on the eve of late PA President Arafat’s siege in his West Bank headquarters in 2003. At the time, there were Israeli incursions into several cities, while internal disputes provoked by Dahlan appeared in Fatah’s ranks. There were also disagreements with Hamas before the division happened, and the Arab states were preoccupied with their wars and did not give much attention to the Palestinian situation.

The PA will maintain its iron grip on security in the West Bank out of fear that the situation might reach a point of no return. Still, there are no guarantees preventing substantial changes in the PA’s leadership with internal and external consensus, in a bid to topple Abbas through a calm coup without Palestinian bloodshed.