Is Abbas persecuting supporters of his rival?

Ahead of the Fatah conference, activists are claiming that President Mahmoud Abbas persecutes all those suspected of supporting his exiled rival, Mohammed Dahlan. 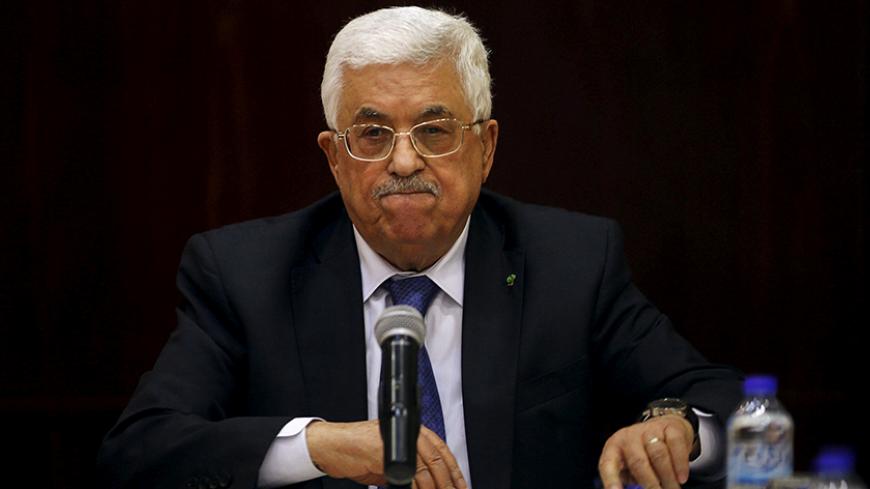 Palestinian President Mahmoud Abbas attends a meeting for the Central Council of the PLO, in the city of Ramallah, West Bank, March 19, 2015. - REUTERS/Mohamad Torokman

They are afraid to talk, lest they are being wiretapped or are under surveillance. They are afraid to meet in a group, lest they be accused of illicit underground organization. They fear the knock at the door that can take place any moment — the knock leading to arrest and imprisonment. Those with families are afraid that their children will be stigmatized and they themselves will be crucified as traitors attempting to subvert the rais’ (president’s) regime.

And they have good reason to fear. In recent weeks — October-November — those who answer to Palestinian President Mahmoud Abbas have indeed been “cleansing” the Palestinian Authority (PA) of the supporters of former Fatah senior member Mohammed Dahlan, Abbas’ bitter rival, under Abbas’ orders. The campaign is running full speed ahead and on all fronts: in refugee camps, where support for Dahlan is high; in Fatah institutions; and even in the Palestinian Legislative Council (PLC). All this, in anticipation of Fatah’s seventh conference scheduled to take place Nov. 29 in Ramallah.

The last time this parley was convened was in August 2009 in Bethlehem. At the time, about 2,000 delegates from around the world attended. In light of the imminent conference and Abbas’ concern over Dahlan’s rising power within the Fatah movement, the Palestinian president has undertaken steps reminiscent of totalitarian regimes. For example, only about 1,300 delegates are expected to attend the upcoming conference. This is because Abbas’ people removed the names of Gaza Strip-Fatah people from the list, as clear Dahlan supporters.

About three weeks ago, on Oct. 22, PA security forces burst into Amari refugee camp in the Ramallah area and arrested a group of Dahlan supporters who held a rally for their exiled leader. Another wave of arrests took place in recent weeks among the youths in Fatah’s “Shabiba” youth movement. This organization’s activities are centered in universities, and dozens of students were taken in for questioning and arrested.

A high-placed Palestinian source in the Fatah movement who is viewed as a close associate of Dahlan told Al-Monitor on condition of anonymity that the number of arrests are increasing daily. No one knows who will be the next in line. The source refused to talk to Al-Monitor on a regular phone line out of concern that Palestinian intelligence might be wiretapping his conversations. He only agreed to talk after he succeeded in getting hold of a “secure” phone. Then he spoke about the atmosphere of terror among people viewed as supporting Dahlan, whether in the present or past.

According to the source, “Not only Gaza people living in the West Bank are being followed. Now West Bank residents are also under surveillance, mainly those in the refugee camps.” Dahlan has a large support base in the Nablus and Jenin refugee camps, by virtue of the funds he solicited for them from the Gulf emirates; these funds were used to promote community projects and assist needy families.

According to the Palestinian source, the people who are most threatened and under tight surveillance are the hundreds of Fatah activists who fled to the West Bank from Gaza after Hamas took control of the Gaza Strip in a military coup in 2007. “Since Dahlan is a Gaza person and managed to win over the hearts of the Fatah people in Gaza for many years,” said a Palestinian source, “all of them [Gaza-originated people] are marked — whether or not [Abbas has] suspicious information on them. They are all under surveillance.”

Thus, numerous people are brought in for hearings before the PA’s Preventive Security Force. These include people who have positions in the PA’s apparatus or in Fatah's apparatus, but mainly security people employed by the PA — anyone who is suspected of expressing support for the president’s rival. If it emerges at a hearing that there is some justification for the suspicions attributed to them, the suspects are fired from their positions. For others, when no basis is found for the suspicions yet some doubt still remains, these people are hit with monetary fines. This usually takes the form of cutbacks in their salaries over several months, which acts as a deterrent to others.

In effect, these position-holders join the hundreds of PA employees in the Gaza Strip suspected of supporting Dahlan, their former leader in Gaza. For several years, the PA had continued paying Gaza salaries, even when Gaza was under Hamas’ control. But recently, these employees stopped receiving wages from the PA, apparently for the same reason. Evidently, this will be the fate of anyone who even dares to entertain the notion that Abbas’ rival — living in his Dubai exile today — will one day inherit the place of the Palestinian rais.

But the most alarming move of all to Fatah people — even those who do not count themselves as part of Dahlan’s circle of supporters — is the recent ruling of the PLC. On Nov. 3, the Council ruled that Abbas has the authority to revoke the immunity of members of the PLC. The significance of this is that Abbas’ directive to revoke Dahlan’s immunity, which was issued in 2012 when the conflict between them became public and Dahlan was dismissed from Fatah and expelled from the territories, is in fact legal. This means that Dahlan can be convicted at any time in absentia. Even his supporters in the Palestinian parliament who expressed support for him in the past or will do in the future can be legally tried in court.

For many months now, the Israeli security system has been keeping close tabs on the bitter internal struggles in the PA. Israeli sources assess that we have entered Abbas’ twilight era. “We get the impression that President Abbas is cleaning out the stables before he resigns from his position. Otherwise, we have no explanation for this madness,” a well-versed Israeli security source told Al-Monitor on condition of anonymity. “Abbas understands the animosity against him, but is not able to even consider the possibility of being replaced by Dahlan.”

Will Abbas resign in the upcoming conference? No one even dares to guess. Regarding a potential successor, the Palestinian Fatah source said, “There are many names being thrown around. One thing is clear: It won’t be Marwan Barghouti, who is incarcerated in an Israeli prison. It can definitely be Nasser al-Qudwa, a relative of [PLO Chief] Yasser Arafat and former PLO delegate to the United Nations. But he won’t have an easy life, because Dahlan will be on his case.”