The West Bank is becoming more volatile as security services continue to raid refugee camps in operations the Palestinian Authority is trying to keep quiet. 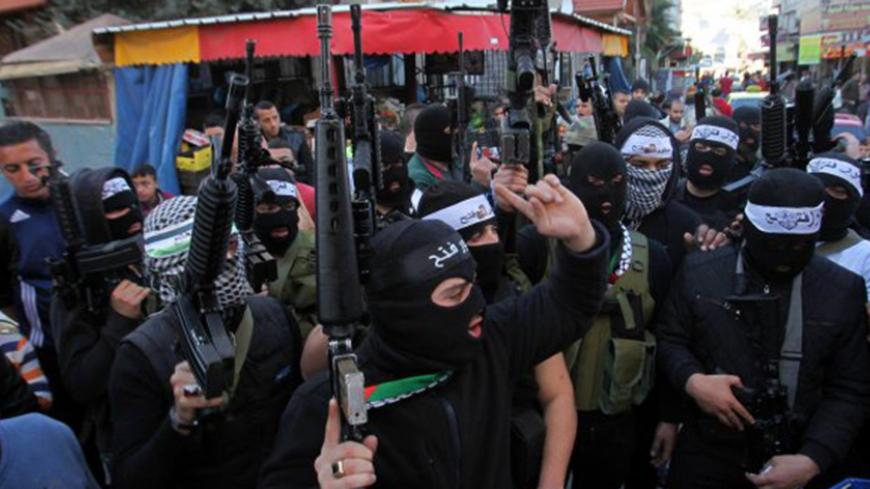 Fatah gunmen come out in support of Mahmoud Abbas in the Balata refugee camp in Nablus, West Bank, in this undated photo. - Twitter/@michaelh992

Tension between the West Bank refugee camps and the Palestinian Authority’s (PA) security services has been escalating since Oct. 21, particularly in the Balata, Jenin and al-Amari camps.

There are several reasons behind the armed clashes that have been occurring in the West Bank camps over the past 10 days. The Palestinian security services have been pursuing individuals wanted in connection to crimes, and they broke up a meeting of Fatah leaders opposed to President Mahmoud Abbas, most notably Tafa al-Bass, held at al-Amari refugee camp in Ramallah on Oct. 22.

On the same day, Palestinian news agency al-Quds quoted an anonymous security source as telling the Wafa agency that the dispersal of the meeting followed political instructions from the PA, which believes that Palestinian parties with agendas serving foreign interests were behind it. The sources added the meeting was illegal because it did not get the permit needed to hold it, and the security services could not allow this threat to the rule of law.

Clashes erupt every time the Palestinian security forces break into the camps for security operations. The most recent confrontation occurred in the Balata refugee camp in Nablus on Oct. 21.

The violence in the West Bank, including clashes that erupted in June in Nablus, have demonstrated the PA’s inability to control the internal security situation and stem the rise of armed militants.

Fatah leader and member of the Palestinian Legislative Council (PLC) Tayseer Nasrallah told Al-Monitor, “The security services' practices in dealing with illegal acts is not working well with Palestinians. The security campaigns in refugee camps should stop, and so should the collective punishment of Palestinians. However, the armed clashes are connected to Fatah’s upcoming general conference to be held at the end of November. Each group within Fatah wants to impose its own agenda and elect or appoint the Fatah leaders they prefer. The closer Fatah’s seventh conference gets, the more armed clashes between Palestinians intensify, even within Fatah itself.”

Palestinian political figures called on the PA to act wisely and end the security operations in refugee camps. On Oct. 29, PLC member for Fatah Najat Abu Bakr objected to security services storming into camps and called on forming an arbitration committee to solve the internal Palestinian conflicts.

On Oct. 26, member of Fatah’s Central Committee and former commander of the Preventive Security Service in the West Bank Maj. Gen. Jibril Rajoub criticized the security services for tightening their grip on the camps and accused some Palestinian security chiefs of crimes against their own people.

One of the reasons behind the clashes in the West Bank is the conflict between Abbas and his arch rival Mohammed Dahlan, the Fatah leader who Abbas dismissed in 2011 on charges of financial corruption. Today, Dahlan wields increasing influence in the West Bank and provides funds and weapons for his supporters in the West Bank in the hope of destabilizing Abbas’ rule there.

Palestinian political analyst Hisham Sharabati told Al-Monitor, “The clashes in the West Bank reflect how intense the conflict between Abbas and Dahlan has become. The conflict between these two leaders’ currents recently turned into armed clashes between gunmen and security services in the West Bank’s refugee camps, resulting in the arrest of every person who criticizes Abbas with charges of supporting Dahlan. This is why the upcoming days will bring an escalating tone of disobedience to the PA and its services in the West Bank areas that Dahlan was able to breach. There will be an arrest campaign to contain the wave of rebellion against the PA and its services.”

The repercussions of the armed clashes in the West Bank may deepen the internal Palestinian division, which will hurt the stability of Palestinian society even if the PA is able to ensure partial stability in some troubled areas by arresting gunmen or seizing weapons in some refugee camps.

Nayef Rajoub, the former minister of endowments and religious affairs and a PLC member from Hamas, told Al-Monitor, “The bloody clashes between Palestinians in the West Bank will negatively affect the Palestinian cause. The current situation in the camps is shameful, regardless of its political background. This threatens the Palestinian cause at this critical stage and shows how Israel is benefitting from the internal Palestinian conflicts while it continues to add fuel to the fire.”

The armed clashes in the West Bank coincided with the Israeli military's statement Oct. 28 announcing the formation of a team to prepare for the possible collapse of Abbas’ rule or an armed confrontation over the PA presidency.

The clashes have reached al-Amari refugee camp in Ramallah, the PA's capital, where its central security services are stationed. The PA could view this as crossing the line and a violation of the security barriers that have protected Abbas since the beginning of his rule in 2005. The Carnegie Endowment for International Peace stated on Oct. 20 that the conflict between Dahlan and Abbas could develop into open field confrontations, especially in the West Bank.

A Palestinian security official told Al-Monitor on condition of anonymity, “Palestinians fear that clashes in the West Bank will escalate because Abbas has a list of 17 Fatah leaders he could dismiss for opposing him and getting closer to Dahlan, such as Shami al-Shami, Jamal Tirawi, Dimitri Diliani, Haytham al-Halabi and Issa Abu Aram.”

The Hamas-affiliated al-Resalah newspaper reported Oct. 28 that the PA has been trying to keep the situation in the West Bank camps quiet and has warned Palestinian media outlets against covering it, saying the incidents have been minor and isolated.

Yousef Rizqa, Hamas' former minister of information, told Al-Monitor, “The armed clashes in the West Bank reflect the intense dispute between Abbas and Dahlan on the cusp of Fatah’s seventh conference. The conflict between the two has skyrocketed after Abbas started fearing Dahlan’s influence spreading in the PA’s own territory in the West Bank. Dahlan has a lot of money and his supporters have been roaming and meeting in several cities, villages and refugee camps in the West Bank.”

The situation in the West Bank has perhaps become even more dangerous on Oct. 24, after the Palestinian security services revealed the arrest of a cell in Nablus that had planned to assassinate prominent Fatah leaders, including Ghassan Shaka, a member of the Palestine Liberation Organization's Executive Committee, as well as Fatah PLC member Tiwari and Fatah’s Revolutionary Council Secretary Amin Maqboul. All this means an unprecedentedly violent security escalation could be underway between the PA’s disputing currents.