Fatah supporters of Mohammed Dahlan in the West Bank are bracing for a crackdown by President Mahmoud Abbas. 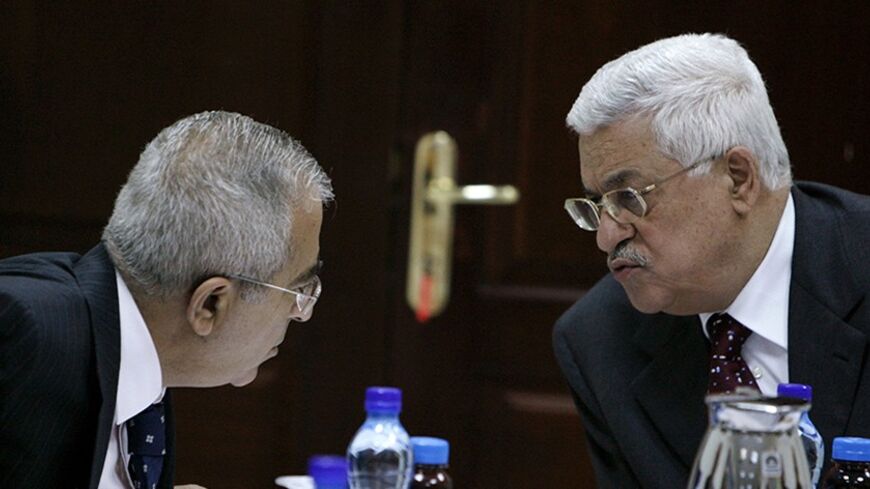 GAZA CITY, Gaza Strip — On March 5, most of the 77,000 Palestinian Authority (PA) employees located in Gaza received their February salaries, but about a hundred returned from their banks empty-handed. They weren’t paid because of an official decision by the PA against supporters of Mohammed Dahlan, a member of the Legislative Council and a dismissed leader from Fatah, who differs with the PA’s general policy. The decision to stop payment on the salaries has worsened the crisis between Dahlan and President Mahmoud Abbas.

Al-Monitor obtained the names of those affected by this decision, and all of them are employed in the Preventive Security Service, which was led by Dahlan. From a security source in Gaza, Al-Monitor learned that a number of those who didn’t receive their salaries are wanted by Hamas and fled from Gaza to Egypt and the West Bank after the takeover in mid-2007, while the rest are still in Gaza.

The reactions to the decision came quickly. On March 8, those who didn’t receive their salaries held a sit-in in Gaza, which Al-Monitor attended, and strongly criticized the decision. They demanded that Abbas immediately reverse the decision in light of the difficult economic conditions in Gaza and threatened to set up a protest tent in front of the homes of Fatah’s higher leadership in Gaza.

Al-Monitor received a copy of the letter sent from the unpaid workers to Fatah. They said that they are not against Abbas and don’t follow a particular person, but that they support Dahlan’s idea of regulatory reform. They accused the Fatah leadership in the West Bank of marginalizing Gaza and its people at all organizational levels of the Central Committee and the Revolutionary Council.

Sufian Abu Ziyade, a high-level Fatah leader in Gaza and one of Dahlan’s most prominent allies, described the decision as a “heinous crime” committed against Fatah members, demanding that Abbas rescind the decision in his capacity as president of all the Palestinian people.

The toughest response came from Rashid Abu Shabak, the former commander of Preventive Security and Dahlan’s right arm, who called for taking up arms against the PA, a call that drew sharp criticism from Fatah as it may lead to bloodshed and will have serious repercussions that will complicate the problem further.

Al-Monitor learned from a Fatah figure from Gaza who currently lives in the West Bank that not paying salaries has caused a number of Dahlan supporters to leave Ramallah for fear of punishment from Abbas. The figure said that they went to Jordan, Dubai and other places abroad, and that their departure reflected a state of extreme tension between the two Fatah camps.

Immediately after the start of the protests in Gaza, Muhammad al-Madani, a member of Fatah’s Central Committee, denied that the action was taken to punish Dahlan’s supporters by stopping their salaries and accused some in the media of fomenting confusion among Fatah’s supporters.

Zakaria al-Agha, the head of Fatah’s senior leadership committee in Gaza and an Abbas supporter, told protesters at the sit-in that he categorically rejects the withholding of salaries because it is unjustified, promising the protesters that he will stand with them.

Al-Monitor has reported on the growing internal Fatah feud between Abbas and Dahlan, warning that the conflict will fester as the disagreement between the two men on internal and external issues continues.

A senior Palestinian official in the West Bank who is close to the Fatah Central Committee but wished to remain anonymous, explained to Al-Monitor what he considered the real reason the salaries for Dahlan’s men weren’t paid. He said, “Abbas formed a committee from members in the Fatah Central Committee, the government and the security agencies to gradually get rid of Gaza employees who support Dahlan. That committee formed several offshoot committees in Gaza and abroad with the mission of collecting the names of Dahlan supporters and sympathizers and issuing reports about them in order to stop paying their salaries.”

According to the official, Abbas received reports that Dahlan was setting up forces in the West Bank refugee camps.

“There is another main reason for the decision. Abbas received from the security services in the West Bank reports claiming that Dahlan has formed an armed force in West Bank camps. That force clashed in recent weeks with forces loyal to Abbas during security sweeps carried out in the Balata refugee camp in Nablus, after Dahlan recruited dozens of insurgents who get monthly salaries of $600. Dahlan is exploiting the economic distress to prove that he has strength against Abbas.”

On Feb. 2, Al-Monitor obtained an internal circular sent by Rifaat Kallab, the deputy director of the Preventive Security Service and an Abbas loyalist. In the circular, Kallab threatened Fatah members in Gaza and warned them that their salaries would be stopped if they thought of supporting Dahlan.

Fatah circles in Gaza noted that behind the decision was Nabil Shaath, a member of the Fatah Central Committee who is close to Abbas. Shaath was subjected to death threats from Dahlan supporters during his visit to Gaza in mid-February. Fearing for his life, he asked Hamas to provide him with security protection and left Gaza.

When Shaath arrived in the West Bank, he accused Dahlan of plotting a coup within Fatah and claimed that Dahlan is being used by Israel against Abbas, just as Israel used him against late President Yasser Arafat. He also said that Dahlan is trying to create an alliance with Hamas in Gaza.

Al-Monitor has learned that among the reasons for the salary withholding is the revelation in an Israel Pulse report about a meeting held between Dahlan and Hamas’s leadership in Abu Dhabi in December 2013 with the intention to complete the reconciliation by circumventing Abbas.

Al-Monitor tried to get an official comment from Hamas about the meeting. However, while an official Hamas source confirmed that the movement held meetings with Dahlan’s men in Gaza after they returned from the West Bank, such as Legislative Council members Majed Abu Shamala and Alaa Yaghi, the source would not confirm or deny the meeting with Dahlan himself.

“The problem is not in the meeting with Dahlan or others. We are looking out for the interests of the Palestinian people. And if we must, we may meet with our enemies to lift the siege on our people. Meeting with Dahlan is not a problem. What’s important is the result,” the source added.

Leaks in the press have claimed that the fundamental problem that prompted Abbas to cut the salaries of Dahlan’s supporters is the meeting in early January in Cairo between Dahlan and Egyptian Defense Minister Abdel Fattah al-Sisi, a meeting that prompted Fatah’s leadership to demand an explanation from the Egyptian ambassador in Ramallah. The ambassador replied that Sisi didn’t receive Dahlan as a Palestinian, but as part of a UAE delegation.

But a Palestinian official close to the Fatah leadership in the West Bank told Al-Monitor that Dahlan’s pressure on Abbas is growing this time via Sisi, because of their intimate relationship that grew when Dahlan was the director of Preventive Security in Gaza and Sisi was director of Egyptian military intelligence. They would often meet together with the Israeli side in the framework of joint coordination.

The official summed up the situation: “All of that has pushed Abbas to curtail Dahlan’s influence in Gaza. Sisi is finding his way to Egypt’s presidency, and the PA fears that [Sisi] will be able to attract Saudi Arabia and the UAE to his side and then [pressure] Abbas [to act] in Dahlan’s favor!”