Hamas leaders met with former Fatah official Mohammed Dahlan in Abu Dhabi to create a framework to deliver financial aid to the Gaza people, and so doing chipped a small crack in the wall between Egypt and Hamas. 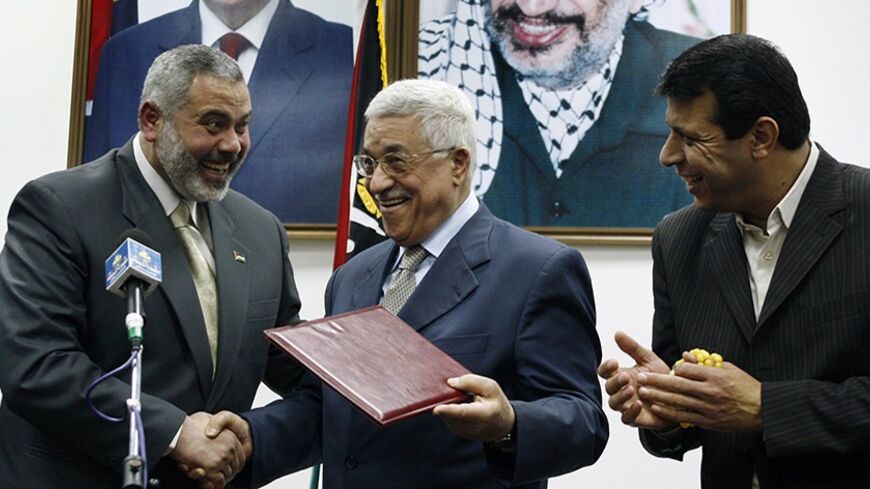 Reports in the past few months have predicted an impending rapprochement between the Hamas leadership and former Fatah official Mohammed Dahlan, in the hope that Dahlan would help Hamas reduce the tension with the new Egyptian government. But these reports have been vigorously denied by the Hamas movement’s official spokespeople. In my Feb. 20 interview with Hamas official Mahmoud al-Zahar, he stated, “Dahlan is involved in the big crisis in Gaza. He hunted down Hamas’s leadership and members after being ordered to do so by Israel. He has a problem with the people of Gaza, whose children were killed because of him. He is not an acceptable mediator. If the Egyptians want to talk, they can do so directly.”

For years, Dahlan has been considered the mortal of enemy of the Hamas movement. It all began when he served as head of the Preventative Security Forces in Gaza. Under his leadership, a “death squad” was established within the forces and its members became notorious for arresting Hamas activists and members of the movement’s military and political wings over the years. The Preventative Security Forces were therefore the first and primary target attacked by armed Hamas activists in their military coup on June 14, 2007. The force was defeated in battle and paraded down Gaza’s main thoroughfare in disgrace. Dahlan’s estate in the Rimel neighborhood of Gaza City became the headquarters of Hamas’s military wing, the Izz ad-Din al-Qassam Brigades, which celebrated its victory over Fatah in the home of the man once considered the most powerful person in the Gaza Strip. Dahlan’s friends and confidantes claim that if he had been in Gaza on that day, it is quite reasonable to assume that he would have been executed.

However, the crisis facing Hamas today and the movement’s desperate desire to build a bridge directly to the current Egyptian government, which just outlawed the organization March 6, brought the sides together and led to a reconciliation that was considered until recently impossible. Al-Monitor has learned the details of the dramatic meeting that reconciled the leader of Hamas with Dahlan, and the agreements that the two parties reached with the full knowledge and consent of Egypt.

The meeting took place at the request of the Hamas leadership in Abu Dhabi in December 2013. Just a few months earlier, Hamas had allowed Dahlan’s wife to visit her family in Gaza for the first time since the coup. This gesture was intended to signal to Dahlan that Hamas is interested in resolving the bitter conflict between them. The meeting in Abu Dhabi was attended by Ahmed Youssef — a former diplomatic adviser to Hamas Prime Minister Ismail Haniyeh — and by Salah Bardawil, both senior leaders of the movement in Gaza. They were joined by the leaders of other Gaza groups to give the event the status of an inter-organizational reconciliation. Other attendees include Hamad Abu Shamallah, secretary of Fatah in Gaza on the eve of the coup, and senior members of the Gaza branches of Islamic Jihad and the Popular Front.

Hamas wanted to take advantage of this meeting to open up a channel of communication with Cairo that encompasses all the organizations and thereby soften Egyptian opposition to direct contact with the movement. The precondition set by Egypt for the opening of such a channel was that Hamas would allow monetary aid to enter the Gaza Strip without going directly to the hands of Hamas. It was therefore decided at the meeting to establish a civilian committee made of representatives of several local organizations so for the sake of appearances, Egypt could transfer money to the people of Gaza without violating its ban on direct contact with Hamas.

The meeting also established a mechanism, agreeable to all the parties, for the regular transfer of humanitarian aid to Gaza through the mediation of Dahlan. This mechanism has already been operating for several weeks now, and Dahlan has raised tens of millions of dollars in the Gulf states.

All of the parties benefit from this arrangement. Hamas is able to offer some small amount of relief to the people of Gaza, especially those who are living in the dire conditions of the refugee camps. Dahlan, who was expelled from Fatah and is in the midst of a bitter political struggle with Palestinian President Mahmoud Abbas, is rehabilitating his position among the Palestinian public in advance of his possible return from exile to Gaza or the West Bank. As for Egypt, this agreement offers an effective way to improve conditions in the Gaza Strip. The new regime in Egypt is concerned that the pressure cooker that is Gaza could explode at any moment, as it did in January 2008, when thousands of Gaza residents tore down the fences along the Egyptian border and flooded the Egyptian town of Rafah.

The response by Abbas to this warming in relations between his two rivals came this week. At his instructions, the Palestinian Authority (PA) froze the salaries of more than a hundred Fatah members in the Gaza Strip that he suspects of supporting Dahlan. Most of these are former senior members of the Palestinian security forces who remained unemployed after the Hamas coup and continued to receive a salary from Fatah.

At this stage, it is hard to tell where this process of reconciliation between Hamas and Dahlan will lead. Will the former senior Fatah member return to Gaza and wage his battle against Abbas from there, in an effort to re-establish his position in the PA leadership? One thing is certain: Dahlan is rehabilitating his public image in Gaza. Taking into account his success in pacifying and cooperating with the movement that was once his most bitter enemy, anything can happen in the political battle over the Palestinian leadership.