Despite the animosity between former Fatah official Mohammed Dahlan and the Hamas leadership, his family was granted permission to visit the Gaza Strip. 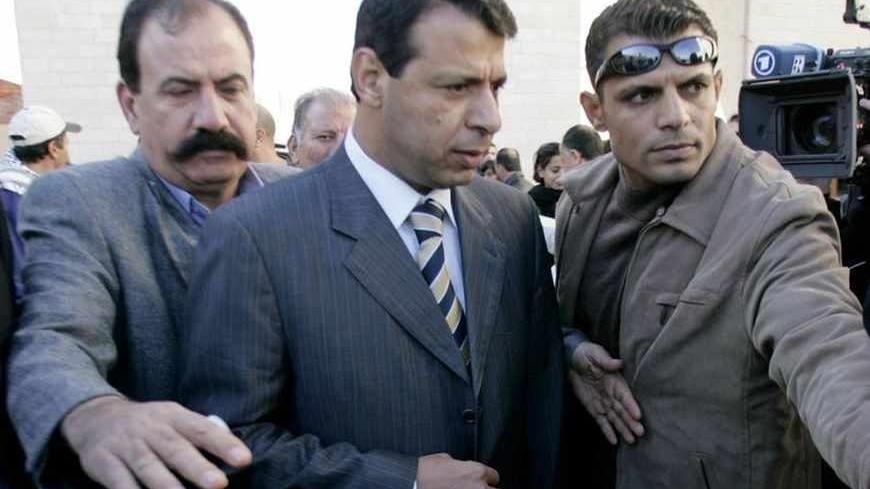 A senior Palestinian source told Al-Monitor that former Fatah leadership member Mohammed Dahlan’s wife and children visited Gaza a few weeks ago after receiving permission to do so from Hamas and obtaining an explicit promise from Hamas Prime Minister Ismail Haniyeh and senior members of the movement’s military wing that their safety would be ensured. Dahlan, formerly a senior member of Fatah, was despised by Hamas members of all levels. Considering the animosity that the organization has toward him and his family, the decision to allow this visit is significant. Dahlan himself was told he could  join the visit to Gaza, but he preferred to stay in Dubai so that the visit would keep a low profile and not put his family at risk.

Dahlan was head of the Preventive Security Force in Gaza, and then interior minister and national security adviser in the Abu Mazen government. On June 14, 2007, the day that Hamas launched its coup, the Preventive Security headquarters in Tel al-Hawa was the main target of their attacks. Hamas conquered the complex with relative ease, captured the members of the Preventive Security Force and took them on a humiliating ride through the streets of Gaza. The message that Hamas wanted to convey was obvious. Everyone who persecuted the organization since the founding of the Palestinian Authority in 1993 had been defeated, and now they were paying the cost. Even today, Hamas members still describe the torture they experienced in the cellars of the Tel al-Hawa complex, after Dahlan launched a wave of mass arrests targeting the movement’s senior members in Gaza.

In the first few hours after the coup, members of the Izz ad-Din al-Qassam Brigades invaded Dahlan’s estate in the Rimel neighborhood of Gaza and raised the Hamas flag from the roof as a symbol of their victory. Dahlan wasn’t in Gaza at the time. He was in Germany, receiving medical treatment for his back, but his family also managed to get out of the Gaza Strip shortly before the bloody fighting started. Dahlan’s enemies claim that he actually fled from Gaza right before the coup, because he realized that Hamas was about to seize control of the government, thus leaving his men without their commander and leader. On the other hand, Dahlan really did suffer from back pain, and was evacuated from Gaza to Germany in a private helicopter belonging to King Abdullah II of Jordan.

Were it not for him needing urgent medical care, it is doubtful whether he would have survived. Hamas wanted him captured, dead or alive, and it was safe to assume that if he had been captured he would have been executed on the spot, just as were many other Fatah members. In fact, those Fatah activists were often called Jama’at Dahlan (“Dahlan’s Gang”). Anyone captured who wasn’t executed was shot in the knees. Today there are dozens of crippled Fatah members in the West Bank who suffer severe disability. Many of them have since had their legs amputated and gone through rehabilitation, either in Israel or elsewhere. And it was all because Hamas wanted to get back at their commander, Mohammed Dahlan.

But Dahlan’s relationship with Palestinian Authority leader Abu Mazen has  reached an unprecedented low since the Gaza coup. Abu Mazen tried to place all responsibility for the defeat on Dahlan who, in turn, accused Abu Mazen of heading a dictatorial regime in the Palestinian Authority. Finally, in 2011, Dahlan was expelled from Fatah. The man who was once the most powerful figure in the entire movement now spends his time hopping between Qatar and Dubai. It has recently become known that Dahlan has filed a lawsuit against Abu Mazen with the International Court of Law in the Hague, asserting that the chairman began persecuting him after he made public allegations of corrupt practices by Abu Mazen and his sons. For his part, Dahlan has demanded his former position and all his possessions in the West Bank be restored to him. The latter were confiscated under a direct order from Abu Mazen.

The surprising visit by Dahlan’s family to Gaza comes against the backdrop of the bitter animosity that Dahlan and Abu Mazen have had for each other over the past few years. The family would not have been granted entry into Gaza had Dahlan not contacted his rivals in Hamas to obtain their consent. Al-Monitor has also learned that the indirect mediator between Dahlan and Khaled Meshaal, head of Hamas’s Political Bureau, who is living in Qatar, was none other than that state’s former emir, Hamad bin Khalifa Al Thani.

It can be assumed that the struggle between Mohammed Dahlan and Chairman Abu Mazen contributed to this bridge-building between Dahlan and Hamas. While it is still too early to determine where it will lead, one thing can definitely be concluded: With just a little effort, even bitter enemies can make up and forgive each other.