Exiled Fatah leader Mohammed Dahlan prepares for the day when negotiations with the Israelis fail, and Palestinian Authority Chairman Mahmoud Abbas will be forced to vacate his seat and step down. 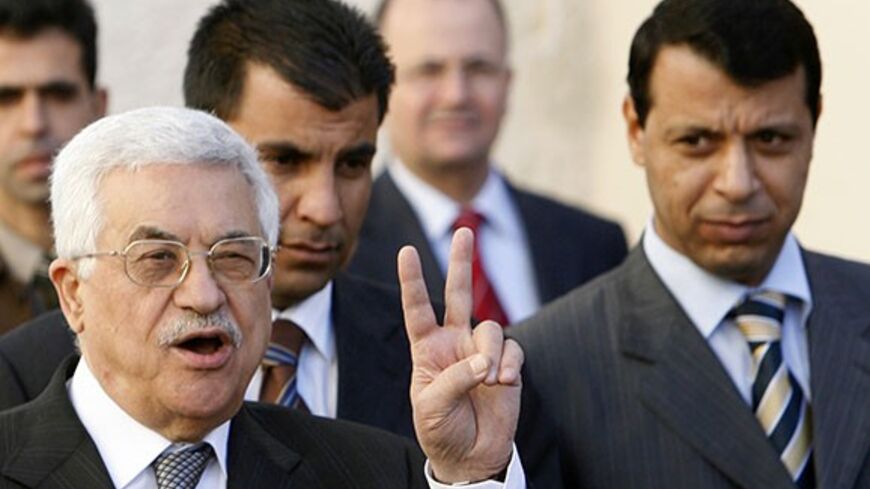 The feud between Palestinian Authority (PA) Chairman Mahmoud Abbas (Abu Mazen) and Mohammed Dahlan is hitting the Palestinian street. Dahlan, a former Fatah member and Abu Mazen’s bitter political rival, has begun creating bases of power and support in the West Bank, which he plans to use when the day of reckoning comes. According to sources close to him, the day when Dahlan attempts to regain his position as a central figure in the Palestinian political system is very close.

Dahlan was head of preventive security in the Gaza Strip and later minister of the interior and national security adviser to the Abu Mazen government. His status in the PA declined after Hamas seized power in the Gaza Strip in 2007, and Fatah supporters were expelled in disgrace. Dahlan, who was then considered the most powerful man in the Gaza Strip, claims that Abu Mazen blamed Fatah's agonizing defeat on him so that he could avoid taking any responsibility for it.

Since then, there has been a bitter political rivalry between the two sides, with each exchanging a steady stream of public accusations and leaking claims of corruption to the media. Abu Mazen’s people accused Dahlan of robbing the public coffers, and Dahlan claimed that Abu Mazen’s children received millions of dollars in aid and benefits from Palestinian public funds. In the end, Dahlan came out on the bottom in this feud. His membership in Fatah was revoked, and he was expelled from the West Bank. He is now engaged in private business in Dubai, while waiting expectantly for the time to come when he can finally wreak his vengeance and restore the lost honor that was taken from him and his supporters.

Dahlan’s people have recently begun to establish their own organizational structure in the West Bank’s refugee camps. In the camps in Nablus, Hebron and Jalazun in the Ramallah district, Dahlan’s people have identified a strong sense of revulsion aimed at the Abu Mazen government. They estimate that young people in the camps feel as if PA officials have abandoned them and are not doing anything to improve their lives or reduce their suffering. This is fertile ground in which to recruit supporters, and it seems as if the work isn’t particularly difficult either. Hundreds of young people believe that Dahlan offers them an opportunity for change and so they are prepared to follow him.

Dahlan is well-acquainted with the methods used to win support and build political powerbases. In the years preceding the Oslo Accord, he was responsible for the “Gaza portfolio” at the operational headquarters of the Palestine Liberation Organization (PLO) in Tunisia. Dahlan held the position together with Jibril Rajoub after Israel assassinated Khalil al-Wazir (Abu Jihad) at his home in the capital of Tunis. From that very moment, Dahlan began sending millions of dollars to Fatah activists and potential supporters in the Gaza Strip.

In an interview I conducted with him in 2005, he spoke very openly about how he laid the groundwork in the Gaza Strip and turned the local residents into his supporters. “In my first month in office, I increased the amount of money devoted to organizing activists in Gaza during the first intifada fivefold, from $50,000 a month to $250,000. It was revolutionary. Do you know what that did in Gaza? Whenever anyone from the territories came to study in Tunisia, I’d pick up the phone and ask, 'What’s up? Do you need anything? Money?' When people got married and didn’t have a penny, I’d help them take their first steps in the world. That’s how I operated. It wasn’t out of some consideration that one day in the future I’ll want to be a leader. Who even thought about that? I acted that way because I come from a poor family.’”

Even now, there is a large group of Fatah supporters, both within and outside the movement, who are ready to follow Dahlan through hell and high water, despite the bitter war being waged against them by Abu Mazen’s supporters. Recently, they’ve also begun working in the West Bank refugee camps, using the same method that Dahlan used when he was still in Tunisia. Dahlan recruits large sums of money in the Gulf States — some estimates put it at tens of millions of dollars — and he sends them to the refugee camps to help the needy, provide food, improve housing, develop sports clubs, provide scholarships to students and assist young couples.

A Palestinian source told Al-Monitor that Dahlan and his people are acting wisely. “They are not creating an opposition to the Abu Mazen regime, and certainly not an organizational structure that will look like pockets of resistance to the PA and Abu Mazen’s security forces. There isn’t the slightest indication of [potential] violence. He is simply providing extensive community aid to the people of the refugee camps in the hope that when the time comes, they will remember it. They will know exactly who helped them and who stood at their side when Abu Mazen and the others from the PA wouldn’t lift a finger to improve their standard of living.”

Dahlan was long considered to be the natural heir to PLO Chairman Yasser Arafat right up until the very public and brutal campaign that Abu Mazen waged against him. Many people marked him as candidate for becoming the next chairman of the PA after the president. But then things became complicated. People close to Dahlan now claim that Arafat passed away before the ground was ready for the appointment of a young man like Dahlan as leader of the Palestinian people, even if he was a familiar and respected figure in the Gaza Strip. Nevertheless, none of his admirers and supporters in the Gaza Strip and the West Bank ever imagined that Dahlan would get into such a harsh clash with Abu Mazen, or that he would be defeated and expelled from Fatah and the West Bank.

Dahlan’s people now believe that once the negotiations with Israel fail, Abu Mazen will be forced to resign. Dahlan will then be able to return to the West Bank and attempt to take over Palestinian politics one more time. “When will that happen?” I asked the Palestinian source I had been speaking to. And he told me it would be, “Soon, very soon.”