What it would cost Abbas to reconcile with Dahlan

Palestinian President Mahmoud Abbas is being pressured by a group of Arab states to reconcile with former Fatah member Mohammed Dahlan and by Qatar not to do so. 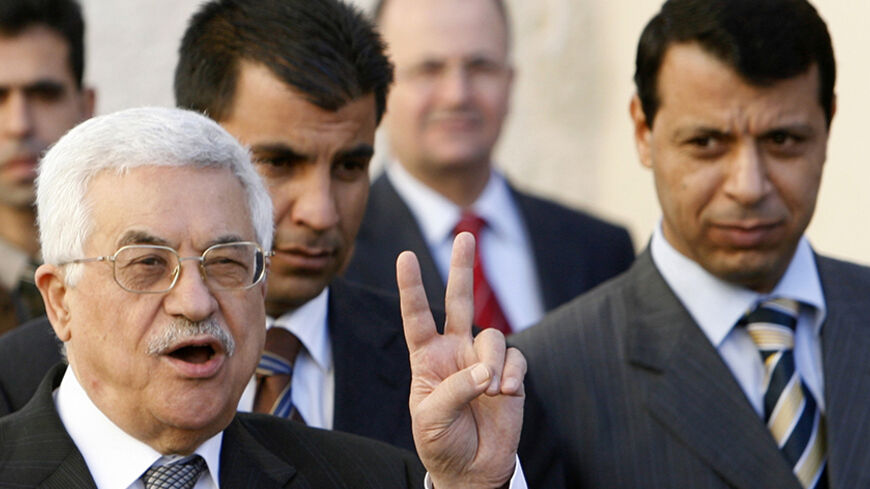 For the past few weeks, Palestinian President Mahmoud Abbas has faced a bitter dilemma. He is being forced to decide whether to reconcile with his bitter rival, former Fatah senior member Mohammed Dahlan. Regardless of his decision, he will end up the loser.

As Adnan Abu Amer wrote in Al-Monitor Sept. 1, Egypt, Jordan, Saudi Arabia and the United Arab Emirates have been heavily pressuring Abbas to end the feud with Dahlan and bring him back to Ramallah, after having expelled him from both the West Bank and Fatah. One of their main arguments is that without a reconciliation with Dahlan, Abbas will not be able to reconcile with Hamas. In short, he must ultimately decide whether he is really interested in reuniting the Palestinian people and ending the schism between the Gaza Strip and the West Bank. Abbas, however, is reluctant to act.

Al-Monitor has learned from reliable sources close to Dahlan that in opposition to the group of countries pushing for reconciliation, led by Egypt, is Qatar, which has been pressuring the Palestinian leader to reject such a move. The Qatari emir, Sheikh Tamim bin Hamad Al Thani, relayed a message to the Palestinian Authority (PA) through former Knesset member Azmi Bishara (who now lives in Qatar) warning Abbas that if he allows their common rival to return to Ramallah, it would signal the end of his regime in the West Bank. As the emir cautioned Abbas, the result would be that Dahlan would replace him as the president of the PA.

Reports of ties between Israeli Defense Minister Avigdor Liberman and Dahlan have made the Qatari threat more than just a response to an internecine Palestinian quarrel. The possibility of an actual tripartite Dahlan-Liberman-Sisi coalition is perceived by Abbas as a signal that there is a regional plot underfoot to replace him with Dahlan. Last year, Israeli and Palestinian media both reported that Liberman had met with Dahlan. It was further reported that Liberman considers Dahlan a fitting negotiating partner, in comparison to Abbas, whom Liberman regards as the main obstacle to any Israeli-Palestinian diplomatic initiative.

The internal conflict within Fatah has become yet another facet of the open animosity between those countries supportive of Dahlan (Egypt, Jordan, Saudi Arabia and the United Arab Emirates) and Qatar. This leaves Abbas trapped between a rock and a hard place. If he acquiesces to the reconciliation initiative, succumbing to the pressure led by Egyptian President Abdel Fattah al-Sisi, he will have problems with the region’s most important financial benefactor, the emir of Qatar.

When Al-Monitor asked whether the Qatari emir's message included a threat of financial sanctions, Dahlan’s confidantes responded that all the players in the current political game are fully aware of the consequences of whatever position Abbas takes. The issue, they say, has been blown out of proportion. Qatar's representation in the Gaza Strip did not respond to Al-Monitor's question about its position on Dahlan's returm.

Confirmation of the intense pressure Qatar is applying to the Palestinian leader was intimated in a speech Abbas delivered at a meeting in Ramallah Sept. 3. “We must push back against all the pressure being employed against us, particularly in our internal affairs,” he said. “No one — not even the wealthy nations — has the right to dictate [policy] or force policy on us. We must think ‘Palestinian.’”

Senior Fatah members interpreted these comments as an indication that Abbas eventually intends to follow through with the reconciliation initiative as part of a package deal that will include an end to the feud with Dahlan, rapprochement with Hamas, and benefits from Egypt and Saudi Arabia. Yet there are also those who interpreted Abbas' remarks as a message that he intends to stand firm against pressure from any and all Arab states. Regardless of what he actually meant, it is clear to everyone that the Palestinian president confirmed that he is the target of a serious onslaught by all the Arab states in regard to Dahlan, whom several Arab leaders consider to be Abbas’ inevitable heir.

This is not the only problem Abbas must confront. Dahlan has bitter enemies within Fatah who will not stand idly by if he, the person they loathe, is allowed to return to a key leadership position in the movement. They have been using social media and Palestinian news sites to post a steady stream of reports and allegations concerning Dahlan’s alleged involvement in corruption scandals in the West Bank and Gaza and his responsibility for the expulsion of Fatah from Gaza with Hamas' military takeover in 2007.

One of Dahlan’s most prominent adversaries is Jibril Rajoub, the Palestinian sports minister and senior Fatah official. Dahlan and Rajoub were close friends in Tunis in the early 1990s, before the Oslo Accord, when they worked together with PLO Chairman Yasser Arafat. During the second intifada, however, Rajoub accused Dahlan of helping Israel launch an attack against the Palestinian Preventive Security Service command center in Beituniya, headed at the time by Rajoub. Since then, the two men have been bitter enemies.

In an interview with Egypt’s ONTV, Rajoub said, “It is incumbent on anyone who made the mistake and harmed the Fatah movement to pay for what he did. If he wants to atone for what he did and once again contribute to Fatah’s important activities in our primary struggle against Israel, he must submit a request to the organization’s institutions, and they will consider it.”

Rajoub then added, “Every such candidate must submit an individual request, rather than a single request for an entire group.” He was referring to what Fatah calls Jama’at Dahlan, the “Dahlan Party,” the large group of Dahlan supporters who either resigned from Fatah or were expelled from the movement for maintaining allegiance to Dahlan.

Rajoub’s comments make it clear that more than just external parties have been applying pressure on Abbas over the Dahlan issue. There is pressure from within his own movement as well. With Fatah currently focusing all its resources toward the municipal elections scheduled for Oct. 8, a major crisis within the movement could be devastating. This means that Abbas' decision on Dahlan will only be known after the elections. All that is known at the moment is that no matter what Abbas ultimately decides, he will emerge the loser.