Egypt-Fatah tensions come to a head at Cairo airport 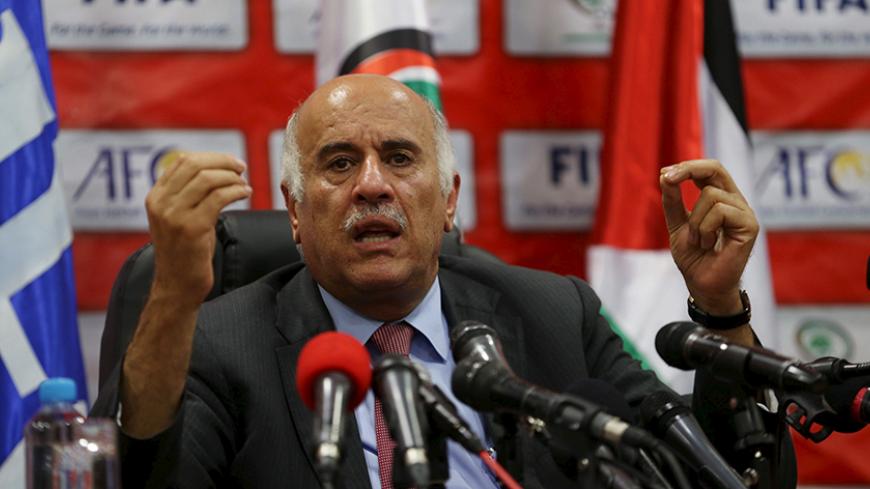 Egypt made an unprecedented move on Feb. 27 and denied entry to Palestinian politician Jibril Rajoub. Egyptian authorities stopped Rajoub, a high-level member of Fatah’s Central Committee, just as he arrived at Cairo International Airport. Rajoub was set to join a Palestinian delegation that the Arab League had invited to attend a conference on extremism and terrorism. Consequently, the Palestinian delegation, headed by Palestinian Justice Minister Ali Abu Diak, withdrew from the conference.

Egyptian Dream TV interviewed Rajoub over the phone the same day he was denied entry. He angrily said that he was not Abu Bakr al-Baghdadi, the leader of the Islamic State, and there was no reason for him to be kicked out of Egypt. He said this was a strategic mistake and that Egypt should explain itself.

Al-Monitor tried to contact Rajoub, but to no avail. The Palestinian Embassy in Cairo also refused to comment on the incident. Even Fatah spokespeople avoided criticizing Egypt, perhaps due to the sensitivity of the situation and Fatah’s unwillingness to anger a major Arab power.

Egyptian security sources told Reuters Feb. 27 that Cairo airport security denied Rajoub’s entry and ordered his deportation from Egypt. Airport officials informed him that his name was on a no-entry list, and he was immediately put on a plane to Jordan with no further explanation.

Tayseer Nasrallah, a member of Fatah’s Revolutionary Council, told Al-Monitor, “It was unexpected for Egypt to treat Rajoub that way. It was a real shock and we cannot find a convincing explanation for all of this. We hope Egypt would reconsider its move and allow Rajoub back in. We hope this was a passing issue. Although I doubt Rajoub attacked Egyptian policy in the first place, some Palestinians are putting words in his mouth about accusing Egypt of interfering in Palestinian internal affairs.”

It seems Egypt’s action against Rajoub reflects tension between Cairo and the Palestinian Authority (PA). Rajoub, 64, is Fatah's third highest-ranking official, the former chief of the Preventive Security Service in the West Bank, the head of the Palestinian Football Federation and the president of the Olympic Committee for Youth and Sports. Rajoub is also seen as a potential successor to Abbas. He considers dismissed Fatah leader Mohammed Dahlan, who is backed by Egypt, his archenemy. All these factors make Rajoub's deportation a hard blow to the PA.

Wissam Afifeh, the editor of Hamas-affiliated Al-Resalah newspaper in the Gaza Strip, told Al-Monitor, “Egypt’s move explains its behavior toward Palestinians. It exploits internal Palestinian disputes between Hamas and Fatah and even between Fatah’s internal currents, and resorts to Palestinian whistleblowers to drive a wedge between Palestinians. The irony is that Rajoub and Abbas played that same role for Egyptians against Hamas, as they incited Egypt against the movement for years, while Abbas and Rajoub were welcomed in Cairo with open arms. However, today, the tables have turned and it seems they are no longer welcome there.”

On March 5, Brig. Gen. Mazhar Ahmad, the undersecretary of Egyptian General Intelligence, spoke to a Palestinian youth delegation at an Ain al-Sokhna resort and said Egypt could have treated Rajoub even worse by doing more than just deporting him — he could have been detained or forced to spend the night in a cell, but he was instead allowed to leave.

Egypt has yet to make an official statement about the incident, but it seems Rajoub’s rejection of Egyptian efforts to reinstate Dahlan within Fatah’s ranks may have pushed Cairo to take action against him.

On Feb. 28, London-based newspaper Al-Araby al-Jadeed cited anonymous Egyptian security sources as saying that an Egyptian ban, which has yet to be issued, includes other Fatah leaders who are considered opponents of Egyptian policy on Palestine, like Mahmoud al-Aloul, Hussein al-Sheikh, Azzam al-Ahmad and Nasser al-Kidwa.

A Palestinian politician in Gaza and a close associate of Dahlan told Al-Monitor on condition of anonymity, “Egypt was very offended by Rajoub’s recent meetings with Fatah leaders in the West Bank. He even attacked Egyptian President Abdel Fattah al-Sisi. This angered many Egyptian officials who were offended. The deportation was a prelude to completely eliminate his chances of becoming head of the PA, as Egyptians can now veto Rajoub’s plan to become Abbas’ successor.”

Egypt does not hide its desire to play a key role in choosing Abbas’ successor. This was made clear in August 2016, when Egypt made the first move toward achieving reconciliation between Dahlan and Abbas, but the latter continues to reject and exclude Dahlan from any opportunity to succeed him, thus angering Egypt.

Rajoub’s deportation from Egypt reverberated in Israel. Writing in Haaretz on March 6, author Jack Khoury said Rajoub's deportation was due to Sisi’s anger toward Abbas for rejecting Sisi’s initiative, announced in May 2016, to hold a regional conference in Cairo with the participation of Israeli Prime Minister Benjamin Netanyahu alongside Arab leaders.

Yoni Ben-Menachem, a former Israeli intelligence officer, wrote in an article for the Jerusalem Center for Public Affairs that the deportation was a message from Egypt to Abbas that he had lost and that his successor will be Dahlan, not Rajoub.

Abdul Qadir Yasin, an independent Palestinian journalist based in Cairo, told Al-Monitor, “Rajoub crossed the line by attacking a major Arab state like Egypt. It was expected for Egypt to treat him that way. Although Abbas could patch things up with Sisi by sacrificing Rajoub, the dispute between Ramallah and Cairo has become uncontrollable due to the recent Palestinian policies, which Cairo sees as negative messages. Most recently, in December 2016, Fatah held its Central Committee elections and Abbas foiled the victory of two Fatah leaders close to Egypt — Tayeb Abdel Rahim and Nabil Shaath — which means the crisis will remain as is.”

Rajoub’s deportation may be the beginning of a snowball that will only grow larger as Dahlan’s influence increases in Cairo and as the latter refuses to forgive any move it considers a sign of disrespect from some PA figures. All the while, the PA continues to lean toward Turkey and Qatar, further upsetting Egypt.