Senior Fatah official Jibril Rajoub has taken a harsher stance toward Israel throughout the tensions surrounding the murder of Israeli and Palestinian teenagers. 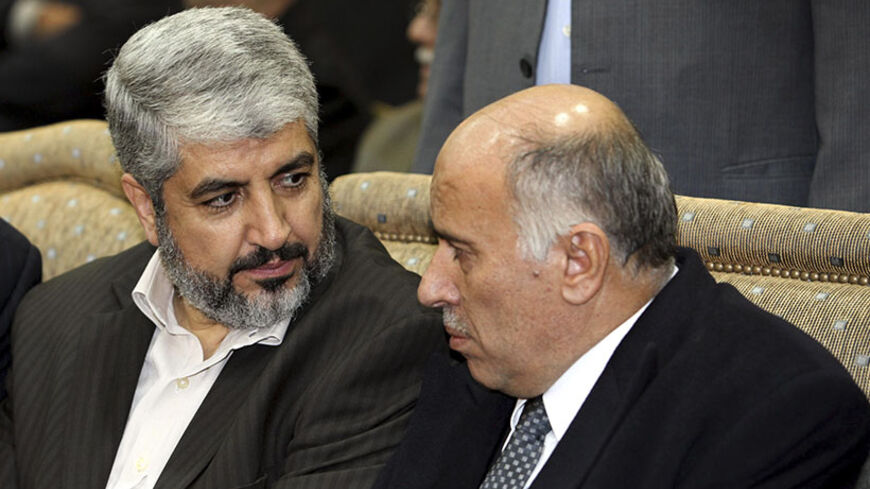 The case of the kidnapped and murdered Israeli teens in Hebron is still at the forefront of the Palestinian situation. The Palestinian leadership has been convening since the bodies of the kidnapped were found on July 1, for fear of major reactions. Al-Monitor learned that President Mahmoud Abbas has during the past days made contacts with Washington and European countries to prevent Israel from carrying out a retaliatory military operation.

While Abbas has kept a more conciliatory and empathetic tone when addressing Israel since the beginning of the crisis, as he denounced the kidnapping, Maj. Gen. Jibril Rajoub, the deputy secretary of Fatah Central Committee, has been quite harsh in his comments on the situation.

In a statement issued on July 2, he warned against any Israeli escalation of the situation, while things were taking a serious turn, threatening to go back to chaotic violence, especially after the negotiations reached a stalemate. Rajoub insinuated that the Palestinian Authority (PA) would take other measures to protect its people from the “organized state terrorism” practiced by Israel against unarmed Palestinians in cities, rural areas and refugee camps, without commenting on the killing of the settlers.

It was surprising that Rajoub, 62, took a different position from that of the PA in denouncing the abduction and killing of the three teenagers. Rajoub stated, “Kidnapping is the only language understood by Israel, thus it is the only way to free our prisoners that Israel refused to release. The kidnapping of Israeli soldiers is the only solution to make Israel release the Palestinian prisoners detained in its prisons and who are increasing on a daily basis.”

Al-Monitor spoke by phone with a member of the Fatah Revolutionary Council, who considered that the reason behind this disparity in stances between Rajoub and Abbas regarding the Hebron operation was the negative effect Abbas’ statements had on Fatah’s image in the Palestinian street. This has pushed Rajoub to take a more popular stance that was welcomed among Palestinians, especially with the approach of Fatah’s seventh conference next month.

“Rajoub’s stance prompted some high-up leaders in Fatah to follow suit, as Maj. Gen. Tawfik al-Tirawi, former head of the general intelligence apparatus and a member of Fatah’s Central Committee, has unprecedentedly demanded that Netanyahu and his government be held accountable as war criminals and terrorists,” the Fatah source said.

However, the Palestinian SHFA News Agency, which is close to Mohammed Dahlan, who was dismissed from Fatah, published a report on July 3 saying that a fierce debate broke out between Abbas and three other members from Fatah’s Central Committee — whom the agency did not name — because of his silence on the latest Israeli violations. They demanded that he break his silence. One of them reportedly shouted at him: “Because of your failed policies we have become traitors in the eyes of the people! You have to rectify your path, otherwise resign and let us put the cause back on its right track!”

These statements coincided with leaks of the minutes of a meeting between Rajoub and the emir of Qatar, Sheikh Tamim bin Hamad Al Thani, which was held during Rajoub’s visit to Doha on May 29. The minutes indicated that Rajoub might be in line to become the next president of the PA following Mahmoud Abbas.

The minutes obtained by Al-Monitor included the following statements, “The emir pointed out Abu Mazen’s [Abbas'] desire to be relieved of his duties; consultations are underway with the Americans who expressed a desire to make the change; Qatar agrees on the appointment of Rajoub as president of the National Authority; and Hamas shall take power over the Palestinian Liberation Organization (PLO) and maintain good relations with Rajoub.”

Fatah did not comment on the leaked minutes and Al-Monitor tried to contact some members of the Central Committee to no avail, given the sensitivity of the subject and since they fear any response from their part might anger either the current president, Abbas, or the next president, Rajoub.

However, the member of the Fatah Revolutionary Council who spoke to Al-Monitor on condition of anonymity, said, “The minutes will prepare the Palestinian street for the ousting, resignation or death of Abbas. If you take a quick look at the current leaders in Fatah, Rajoub seems to be the front-runner, as he is a high-caliber security man and has close relationships with Palestinian politicians of all factions. Despite the fact that he left his official position as the head of the Preventive Security Service in 2002, he continues to have considerable influence on most of the security apparatus officers. He is preparing to take up a high-up position in the Fatah movement during the seventh conference, which is scheduled to take place next month.”

Speaking to Al-Monitor by phone from Ramallah, the source added, “It is known that Rajoub has strong personal relations with the Hamas leadership at home and abroad. His brother, Sheikh Nayef al-Rajoub, the former minister of awqaf in Ismail Haniyeh’s 10th government, has visited Doha on several occasions, visited Gaza in early 2013 and finally went on a historic visit to Tehran to renew the relationships with Hamas’ ally.”

It is important to note that Rajoub’s position in supporting the kidnapping of the Hebron settlers was not the first time his position departed from Abbas’ policies. He visited Gaza in early 2013 and met with a Hamas leader closely linked to Abdul Salam Haniyeh, a member of the Olympic Committee and the eldest son of Haniyeh, deputy head of Hamas’ political bureau.

Rajoub also delivered a speech on the occasion of Nakba Day in Qatar on May 28, which showed a clear rapprochement toward Khaled Meshaal, the Hamas leader, who attended the celebration. The friendly relationship between the two appeared through their mutual compliments.

The biggest loser of the so-called arrangement between Rajoub, Qatar and Hamas on Rajoub’s presidency is Dahlan. It is worth mentioning that Majid Abu Shamala, a leader close to Rajoub who was recently dismissed from Fatah by Abbas, was reported as saying, “I read the minutes just like thousands of Fatah cadres. I am not sure if it is true or not, but in all cases, I reject any interference in Fatah’s affairs by any party whatsoever.”

However, a Fatah leader affiliated with Dahlan’s movement residing in Egypt said in a phone interview with Al-Monitor, “We were not surprised by the leaked minutes, but we link it to the regional polarization and Qatar's desire to prevent Egypt from unilaterally handling the Palestinian issue, in light of Qatar’s awareness of the strong relationship between Dahlan and [Egyptian] President Abdel Fattah al-Sisi and the latter's desire to bring Dahlan back to the Palestinian scene.” The Fatah source believed that “Dahlan’s reluctance to comment on the minutes was due to the fact that he contented himself with the Egyptian veto on any intervention by Qatar and Hamas on the issue of Abbas’ succession, since this is an internal affair of Fatah.”

On the other hand, news websites close to Dahlan started a harsh campaign against Rajoub and Qatar. The editor of the news website Fatah Voice confirmed that “the minutes reveals a US-Zionist conspiracy woven in secret under the auspices of Qatar, which is part of Rajoub’s efforts with Qatar and Hamas to consolidate his illusory aspirations of becoming president. However, the latter was mistaken when he informed Qatar that Dahlan’s presence in Fatah had ended.”

On the other hand, in an interview with the Lebanese newspaper Al-Akhbar, Vice President of the Legislative Council Hassan Khreisheh ruled out the possibility of anyone occupying the presidential seat except by way of an election. “Rajoub failed in the 2006 parliamentary elections, so how can he become president?” he said. Khreisheh pointed out that Rajoub’s name being mentioned in the minutes implied that he had no chances of winning later and that this was an attempt to impose him as president, which would deprive him of the popular and official cover and lead him into a confrontation with the Palestinian people.

Hamas ignored the subject altogether and did not comment on it. Al-Monitor contacted one of Hamas’ officials residing abroad who neither confirmed nor denied the leaked minutes. He said, “Rajoub is one of the basic choices in Fatah for the post-Abbas period, since his name is not associated with the years of division. He consistently tried to build bridges with Hamas and may not be blamed for having his best interest at heart.”

The official concluded by saying, “Hamas does not interfere in the internal regulatory affairs of Fatah; they know best who their next presidential candidate is. As a Palestinian national movement, we want Fatah to be in a state of recovery and strong cohesion, away from attempts to cause regional polarization and Israeli interventions aimed to impose a candidate at the expense of another. However, Hamas will consider contesting the presidential elections by nominating one of its leaders or supporting another candidate.”

This was hinted at by Mousa Abu Marzouk, deputy chairman of Hamas’ political bureau, to Al-Monitor in an exclusive interview in May.

The Hamas official with whom Al-Monitor spoke did not rule out supporting Rajoub in future presidential elections. “The Palestinian situation is like quicksand. Every day, there is a new development, so let us wait; we must not rule out or anticipate anything.”