Despite his reluctance, dismissed Fatah leader Mohammed Dahlan is getting support from other countries to challenge Palestinian Authority President Mahmoud Abbas. 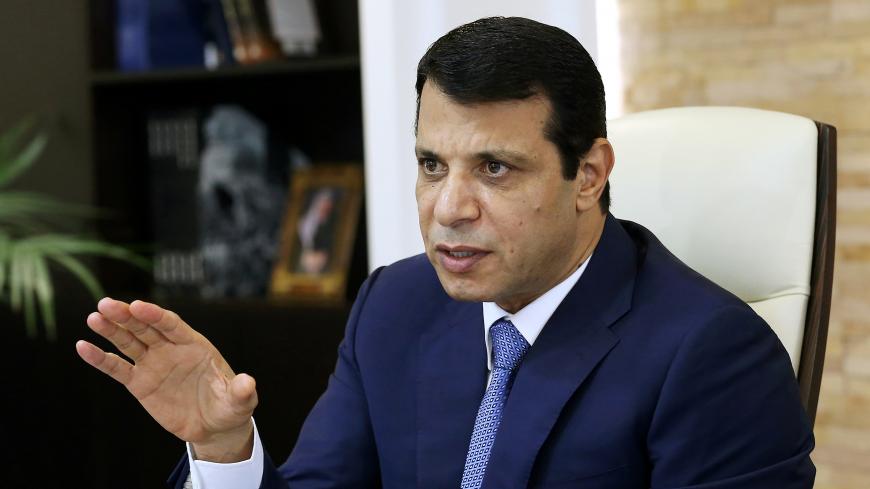 As the supposed reconciliation between Palestinian parties Hamas and Fatah appears to be going nowhere after more than four months, Egypt and the United Arab Emirates (UAE) are encouraging dismissed Fatah leader Mohammed Dahlan to form a new Palestinian party to challenge President Mahmoud Abbas.

Raising another potential scenario, Dahlan’s representatives met Feb. 28 in Cairo with a Hamas delegation to discuss the possibility of Dahlan getting involved in administering the Gaza Strip. Abbas had assumed that responsibility as part of the reconciliation agreement signed in October, but that process stalled, leaving Gazans in a humanitarian crisis.

Citing anonymous Palestinian sources, the Nabd news agency reported Feb. 5 that Dahlan was asked by the UAE to form a political party dissociated from Fatah, given Abbas’ refusal to end his and Dahlan's dispute, which goes back to 2010. Dahlan lives in exile in the UAE but is still a member of the Palestinian Legislative Council (PLC). The UAE also wants Dahlan to run in the next presidential election.

Although Nabd didn't report Dahlan’s specific response to the UAE request, it said he is reluctant to form a new party. The article said that in January and February, Dahlan held a referendum in Gaza, Lebanon and Jordan, where supporters for his Democratic Reform Current reside, to gauge support for a new party. The referendum produced mixed results.

Imad Mohsen, a spokesman for the Democratic Reform Current, told Al-Monitor, “The UAE's interference in our work is out of the question. … Some members of the Democratic Reform Current are indeed calling for complete dissociation from Fatah, in light of all the exclusion, separation, marginalization and trials carried out by Abbas and his entourage against his opponents.”

Mohsen added, “These members want to move forward by forming a new party that carries Fatah’s legacy, but does not claim to be its successor. However, the current’s leadership recently discussed the UAE’s request and agreed that we are part of Fatah and will never leave it because any change in Fatah should only come from within.”

The Democratic Reform Current emerged in 2016 in the Gaza Strip following a failed reconciliation between Dahlan and Abbas, which was sponsored by Egypt, Saudi Arabia and the UAE. This party, led by Dahlan, includes senior Fatah leaders in Gaza who were dismissed by Abbas from Fatah's Central Committee at various times since 2014. Over the years, Abbas took punitive measures against them, such as cutting their salaries from the Palestinian Authority (PA). Abbas also prosecuted Dahlan supporters in the West Bank.

In addition to talks about Dahlan forming a political party, his name has been widely mentioned when it came to efforts to aid Gazans in recent weeks.

On Jan. 30, Abdulhamid al-Masri, a Democratic Reform Current leader, spoke to the Dahlan-affiliated radio station Fateh Voice in Gaza about the current and Palestinian forces in Gaza forming a purely administrative and humanitarian committee with no political role to help those struggling in the Gaza Strip. No developments have been reported yet.

On Feb. 1, academics and experts headed by Ibrahim Habib formed the Gaza Rescue Council. In a Feb. 12 meeting in Cairo, a Hamas delegation and a delegation of Dahlan’s most prominent assistants discussed political developments pertaining to the Palestinian cause and potential ways to alleviate the difficult humanitarian situation in the Gaza Strip. The participants further stressed the importance of the Egyptian role in the Palestinian cause.

Ahmed Yousef, a former political adviser to Ismail Haniyeh, told Al-Monitor, “Dahlan is a national component, and he is striving through his movement to preserve his presence on the Palestinian political map. Perhaps if he decided to form a new party, it would be better for Hamas to cooperate with him without having to face any difficulty with Fatah and its leadership in the West Bank. Although Dahlan is a political adversary to Hamas and is the head of a broad Fatah current, Hamas is moving toward a national partnership with him to manage the Gaza Strip, alongside Palestinian factions.”

Khalil al-Hayya, a member of Hamas' political bureau, told the Egyptian daily Al-Shorouk during his Feb. 19 visit to Cairo that Hamas sees Dahlan as one of the most prominent figures who wants to serve Palestinians. Hamas welcomes him because he brought financial aid from the UAE to Gaza, Hayya added.

News of a potential Dahlan-led party coincided with a Feb. 19 attack against him by Jibril Rajoub, the secretary of Fatah’s Central Committee. Rajoub blamed Egypt for supporting Dahlan, prompting Egypt's media office to publish a statement the same day accusing Rajoub of interfering in Egypt’s affairs.

Abdullah Abdullah, a member of Fatah's Revolutionary Council and chairman of the PLC’s political committee, told Al-Monitor, “Dahlan has the right to form a political party isolated from Fatah. He could easily do so and draw cadres from the movement by wooing them with the funds he gets from certain regional countries."

Abdullah added, “However, said party wouldn't be able to survive for long. Fatah witnessed several dissociations in the 1970s and 1980s, but none could shake down its organizational power, and those who defected ended up fading away.”

In December 2015, press reports spoke of Dahlan's efforts to form a new party with senior leaders from Fatah and the PA who are not on the best of terms with Abbas, such as former Prime Minister Salam Fayyad, former secretary of the PLO Executive Committee Yasser Abed Rabbo, and members of Fatah’s Central Committee Tawfiq Tirawi and Sultan Abu al-Einein. Dahlan received significant support from Egypt, Jordan and the UAE.

A member of Fatah’s Central Committee told Al-Monitor on condition of anonymity, “Despite his efforts in 2015, Dahlan was unable to form his own party, as the people he was counting on to stand by him — whom I won't name — didn't encourage him to defect, and did not want to close all communication channels with Abbas."

Issam Adwan, an expert on Fatah history and a professor at Al-Quds Open University, told Al-Monitor, “Dahlan's intention to form a separate political party brings to mind Fatah’s internal schisms. It is true that Dahlan may be supported by the UAE, but his party could soon turn into a full-fledged UAE-affiliated one and the step could also [have only] spur-of-the-moment support. So this new party may not be able to confront the main current in Fatah, led by Abbas, in the long run.”

It seems the ongoing rift between Dahlan and Abbas and the failure of Arab mediations to bring them closer could limit Dahlan’s choice of scenarios. One possible outcome could include forming a new political party, but the long years of estrangement show that if Dahlan were to continue to oppose Abbas from outside the framework of Fatah, he would probably fail to bring about real change.

Perhaps a continual decline in Abbas' relations with Egypt, Saudi Arabia and the UAE — Dahlan’s main supporters — will encourage Dahlan to form this party. Egypt could support Dahlan politically, and the UAE and Saudi Arabia could cover him financially. Meanwhile, forming a new political party could bode well for Hamas and spare it the awkwardness of having to deal with Dahlan as part of Fatah, which could be mistaken as encouraging division within Fatah.

However, this does not guarantee the success of Dahlan’s chances of forming his own party, as Dahlan himself could be painted as trying to pull Fatah apart while Abbas attempts to keep it together.