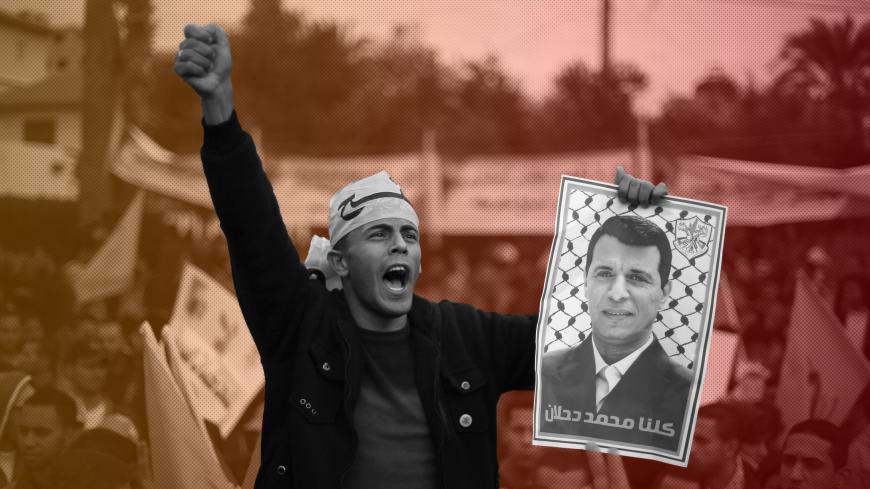 A Palestinian supporter of Mohammed Dahlan holds a poster of the former high-ranking Fatah member during a protest against Palestinian President Mahmoud Abbas in Gaza City, Gaza, Dec. 18, 2014.

GAZA CITY, Gaza Strip — Sources close to Mohammed Dahlan are claiming that the former high-ranking Fatah member intends to form a political party with backing from Egypt and the United Arab Emirates. Such a move would pave the way for the Democratic Reform Current (DRC), the movement Dahlan founded within Fatah, to participate in future Palestinian elections, unidentified sources told Arabi21 in July. The prospect of Dahlan founding a new party to rival Fatah has shed light not only on ongoing Palestinian divisions, but also on the latest manifestation of Arab states' involvement in Palestinian affairs, which oddly finds archenemies Qatar and the UAE standing together in opposition to Fatah.

The report coincided with the decision by Palestinian President Mahmoud Abbas, Dahlan's archrival, to hold Fatah leadership elections in Gaza, a Fatah source told the Gaza-based Safa news agency in July. The move reportedly came at the recommendation of the Fatah Central Committee in the West Bank. The last Fatah elections in Gaza, which Hamas has controlled since 2007, took place in 2015. No date has been set for the upcoming vote.

Dahlan, currently living in the UAE, has not commented publicly on the issue of a new party, which if true, would require internal DRC elections. Dahlan had been dismissed from Fatah in 2011, on Abbas' orders, on charges of “delinquency,” that is, having other allegiances. He founded the DRC in Gaza in 2016 after he and Abbas failed to reconcile. Fatah members who joined Dahlan in DRC leadership roles were also expelled from Fatah in what was essentially a purge ahead of the seventh Fatah conference in 2016, though rank-and-file DRC supporters were allowed to remain. Dahlan aside, those expelled still claim fealty to, and even membership, in Fatah.

As a security adviser and as head of the Palestinian Security Services in Gaza in the early 2000s, Dahlan had established close relations with Israel and Egypt through security cooperation with the Palestinian Authority (PA). Dahlan's influence remains strong in Palestinian politics. A Gaza native, Dahlan has played an instrumental role in Egypt working with Hamas, Fatah's rival, on various issues concerning the territory and in Cairo's effort to mediate a long-term truce between Israel and Hamas. After the falling out with Fatah, Dahlan also gained the patronage of the UAE, Egypt's ally in the Saudi-led effort to isolate Qatar.

Some observers see Dahlan's efforts to establish a new party with Egyptian and UAE support as having the potential to break the Fatah-Hamas duopoly over Palestinian politics, offering West Bank and Gaza residents a viable third option. The DRC is, however, divided over the idea of a new party. According to Fatah sources in Gaza, they are concerned that such a move would exacerbate the ongoing internal division. The sources said the current’s leadership had issued an internal circular declaring that the DRC will not leave Fatah.

Osama al-Farra, a leader in the current, also denied the possible formation of a new party. “[The DRC] will remain in the Fatah movement, working to reform and redeem it,” he told Al-Monitor. “We will continue our work to restore Fatah to its agenda of struggle [for the Palestinian cause].”

Regarding the current's stance toward Palestinian elections, Farra said the DRC leadership would be keen to present a unified Fatah list. “We are doing everything we can to realize that goal,” he said. “If [Abbas] persists with this exclusionary approach, [however], we will have to adopt a [different] position on running.”

DRC spokesman Imad Mohsen asserted that all efforts to end the internal Fatah rift have been met with a negative response from the movement's leadership in Ramallah. Regarding the potential for a new party, Mohsen told Al-Monitor, “The leadership of the Democratic Reformist Current met in January 2019 and issued a political declaration outlining its priorities for the next phase — most notably, Fatah’s unity and the restoration of the movement from its hijackers,” referring to Abbas and his loyalists.

Mohsen noted that the report of a new party originated from unidentified sources through Arabi21, with ties to Qatar. That, plus the report's mention of the UAE's support for a new party, raised suspicions in the DRC. “[This] reflects [Qatar’s] interest in alienating us from Fatah and sustaining [Fatah's] internal division,” Mohsen claimed.

In 2018, after several failed attempts at a Fatah-Hamas reconciliation, the Fatah-led PA imposed a number of punitive economic measures against Gaza, such as refusing to pay government salaries and reducing the electricity supply, in an effort to force Hamas to relinquish control over the territory. With the growing humanitarian crisis stemming from Israel's (and at times Egypt's) blockade of Gaza, ongoing since 2007, Qatar stepped into the breach, with the green light from Israel, to provide financial support to Gaza. The move greatly angered Fatah and the PA, eliciting charges of interference in Palestinian affairs and propping up Hamas.

Meanwhile, Fatah sources in Gaza told Al-Monitor that long-standing tensions between Abbas and the UAE have continued to grow with Dahlan in residence in the Gulf state. Kamal al-Astal, an international relations professor at Al-Azhar University in Gaza, told Al-Monitor that the UAE’s support of Dahlan reflects an attempt to take advantage of the internal Palestinian division. “There are [Palestinian] factions that have become representative of foreign parties in the Palestinian arena,” he explained.

For the UAE, it appears, a Dahlan party represents a means to signal that it will not concede influence in Palestinian affairs to Qatar. Such a party, especially in Gaza, could serve as a check on and challenger to Hamas, the beneficiary of Qatari largesse through Doha's intervention in Gaza.

The sources who spoke with Arab21 said Egypt wants a new party because efforts to reconcile Abbas and Dahlan have failed and because Cairo wants a new political competitor to break through the Fatah-Hamas roadblock to progress.

Abdallah Abdallah, a member of Fatah's Revolutionary Council, noted that any Palestinian has the legal right to form a new party, but he added, “This depends on the basis on which it is founded and the members of the party.”