Is Fatah reconciliation underway ahead of local elections?

Along with a number of Arab countries, Egypt has been making recent efforts to achieve reconciliation between President Mahmoud Abbas and dismissed Fatah leader Mohammed Dahlan in conjunction with the Palestinian preparations for local elections. 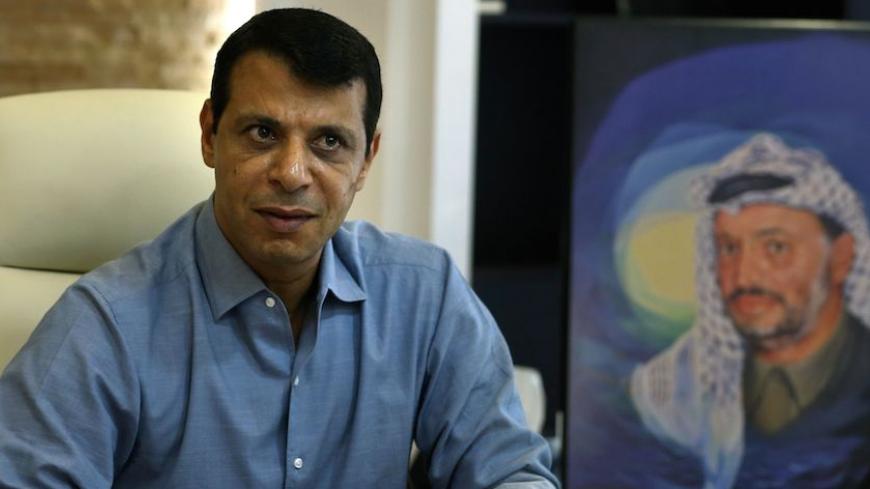 News about Fatah reconciliation efforts began spreading in the past few days, as Kuwaiti newspaper al-Jarida cited Aug. 26 a prominent Egyptian source, who requested anonymity, as saying there were unremitting Egyptian efforts with Arab support to achieve reconciliation between Palestinian President Mahmoud Abbas and Fatah leader Mohammed Dahlan and establish unity within Fatah.

Internal division has been plaguing Fatah ever since its top leadership, the Central Committee, headed by Abbas, decided back in May 2011 to dismiss Dahlan — who served as national security adviser to the Palestinian Authority (PA) — and referred his case to the Palestinian attorney general on charges of financial corruption and being involved in murder cases. Dahlan was accused by Abbas of participating in the assassination of Hamas military leader Salah Shehadeh, who was killed by Israel in Gaza in 2002. He was also accused of being involved in the assassination of Fatah leaders back in 1993 in Gaza, namely Mohammed Abu Shaaban and Asaad al-Saftawi.

In the past five years of estrangement, all Palestinian and Arab efforts to get Abbas and Dahlan to reconcile have failed.

Abdul Hamid al-Massri, a member of Fatah’s Revolutionary Council and a close associate of Dahlan in Gaza, told Al-Monitor, “Egypt, Jordan, Saudi Arabia and the UAE are making efforts [to achieve unity within Fatah] as they believe the Palestinian reconciliation can only be achieved if reconciliation within Fatah succeeds, without Dahlan making any concessions to Abbas. As Fatah members, we are ready to do whatever it takes to keep Fatah united, even though Fatah’s leadership in Ramallah is yet to make any steps toward Dahlan’s associates in Gaza. These steps include bringing those dismissed members back to the Fatah movement and resuming the payment of salaries that were cut off because of [those members’] affiliation with Dahlan. Many Fatah parties had made promises that such positive steps would be taken.”

It seems the Egyptian and Arab efforts gained real momentum when the Palestinian government stated Aug. 30 that it truly valued these efforts aiming at reconciliation and unity within Fatah.

A statement made by Fatah’s Central Committee on Aug. 22 also called on the movement’s cadres to strengthen their unity, and emphasized that its institutions are open to dealing with their problems, including the grievances of those who suffered punitive measures. This is in reference to Dahlan and his associates who were also dismissed from Fatah, such as Sufyan Abu Zaydeh, Nasr Jomaa, Majed Abu Shamaleh and Rashid Abu Shabak. This recognition could be the first step toward resolving the outstanding issues after the decisions and sanctions Abbas issued against Dahlan’s supporters since 2011. These decisions included the discontinuation of [Dahlan’s supporters’] salaries and their dismissal from their positions in Fatah’s leadership.

On Aug. 24, Samir al-Mashharawi, Dahlan’s right hand man, called on, from his Facebook page, dismissed Fatah members to take the necessary measures that guarantee their financial and organizational rights as authentic Fatah members and leaders. However, Rafiq Natsheh, head of the Palestinian Anti-Corruption Commission, confirmed Aug. 29 that the charges of corruption against Dahlan shall not be dropped, even if he reconciles with Abbas.

It seems difficult to talk about efforts for internal Fatah reconciliation without discussing the Palestinian preparations for the local elections to be held Oct. 8, in light of Hamas’ high competitiveness and Fatah’s and Israel’s concerns about an expected victory for Hamas. These concerns are justified by the ongoing internal division within Fatah, which prompted the Fatah movement to seek reconciliation between Abbas and Dahlan to unify the movement’s ranks and guarantee a win in the upcoming local elections.

A Palestinian minister told Al-Monitor on condition of anonymity, “The last meeting held by Fatah’s Central Committee on Aug. 30 addressed the Egyptian and Arab efforts for reconciliation between Abbas and Dahlan. The meeting even discussed possible scenarios, which included Dahlan's apologizing to Abbas for accusing him of financial corruption on several occasions. Some Fatah leaders are expected to visit Cairo in early September to discuss the terms of reconciliation, while Fatah’s leadership has agreed in principle on the return of certain members close to Dahlan who were dismissed in recent years. If the efforts succeed, Dahlan will arrive in Ramallah in a few weeks, but maybe not before the election take place on Oct. 8.”

For its part, Hamas did not issue an official statement and did not comment on the Arab and Egyptian efforts to achieve reconciliation within Fatah. Hamas may be aware that reconciliation may strengthen Fatah and give it a lifeline to win in the upcoming local elections.

Ahmed Youssef, former Undersecretary of the Palestinian Ministry of Foreign Affairs and former political adviser to deputy head of Hamas’ political bureau, Ismail Haniyeh, told Al-Monitor, “Hamas sees in any internal Palestinian reconciliation a national goal that must be encouraged and supported. Division among Palestinians only serves Israel, and any Arab step aiming at reconciliation within Fatah pleases us. We hope that this reconciliation would be followed by steps toward strengthening our project and national goals.”

Egypt has always led all political action inside Palestine, whether aimed at a Fatah reconciliation, a Hamas-Fatah reconciliation or even a cease-fire between Hamas and Israel. However, this time other Arab countries joined in. including Jordan, the United Arab Emirates and Saudi Arabia, which raises questions about the objectives behind these countries’ joint efforts to rearrange the situation within Fatah.

Adel Samara, a Palestinian academic and editor-in-chief of Kanaan Online magazine, told Al-Monitor, “The Arab role aims to sabotage the Palestinian cause, and the parties [currently] seeking to achieve Fatah reconciliation — namely Saudi Arabia, Egypt, Jordan and the UAE — are leading an axis that is hostile to Qatar, the Muslim Brotherhood and Hamas, knowing all three parties are close. [Hamas, Qatar and the Muslim Brotherhood] enjoy the support of Turkey, especially after the ouster of former Egyptian President Mohammed Morsi in July 2013 by the Egyptian army.”

Samara added, “The Arab efforts toward reconciliation within Fatah may succeed this time, and could lead to Dahlan's running for the Palestinian presidential elections to replace Abbas. But if Hamas were to perceive the Fatah reconciliation from a national point of view in terms of [achieving] Palestinian unity in the face of Israel, it would take advantage [of this reconciliation]. But if Hamas sticks to its partisan point of view and seeks competition with Fatah in the local elections, this could be bad for [Hamas].”

The Egyptian and Arab efforts to achieve Fatah reconciliation may coincide with Abbas’ quest for a safe exit from the Palestinian presidency. There have been reports that Abbas is communicating with regional countries about his leaving the political scene without being prosecuted, along with his sons, for making a fortune at the expense of the Palestinian public. Arab countries have started efforts to help rearrange the situation within Fatah, but no one can guarantee the success of such an endeavor.