Fatah infighting between rival camps of President Mahmoud Abbas and Mohammed Dahlan is continuing to escalate as Dahlan seeks to revive his political career. 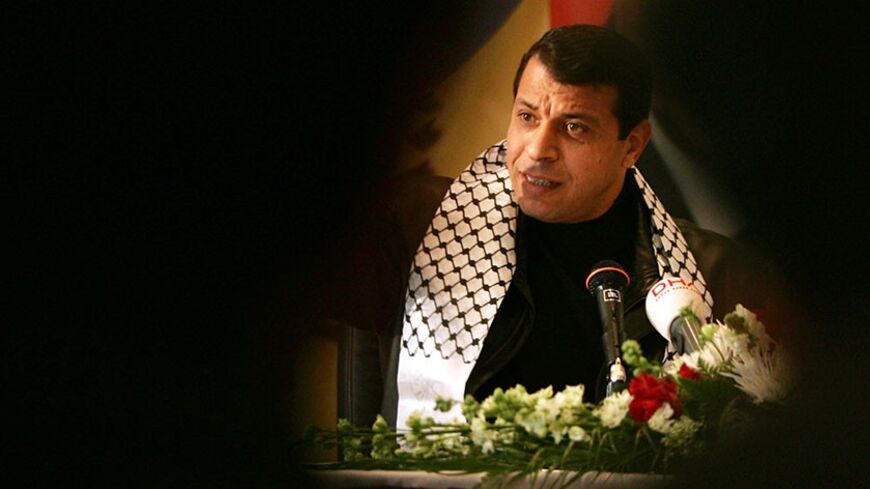 GAZA CITY, Gaza Strip — The conflicts raging inside Fatah have escalated as a result of the tug-of-war between two opposing factions led by the chairman, President Mahmoud Abbas, and dismissed former leader Mohammed Dahlan for control of the Gaza arena, which is largely dominated by Hamas. Delegations from both factions have separately visited the Strip to iron out possible solutions to the internal strife.

Local media outlets have published a barrage of press statements and articles from both factions inside Fatah regarding the ongoing disagreements. These exchanges culminated in threats and accusations of treason and of being subservient to outside agendas or cooperating with Hamas.

A delegation from Fatah’s Central Committee composed of four people residing in the West Bank and led by Nabil Shaath visited the Strip on Feb. 7. Their visit came on the heels of another by the opposing delegation representing the Dahlan camp, led by Majed Abu Shamleh, on Jan. 21. Both can be viewed as attempts by either side to secure as much support as possible from members of the movement in Gaza.

In numerous interviews, the latest of which took place on Ramallah-based Palestine Television Feb. 20, Shaath repeatedly accused Dahlan of orchestrating a coup inside Fatah. He elaborated by describing what occurred as “a tactic that we expected Israel to use, much like it did in the past with late President Yasser Arafat.”

Sources in Fatah told Al-Monitor that Dahlan’s meeting in early January with Egyptian Defense Minister Abdel Fattah al-Sisi in Cairo, news about which was leaked by local Fatah-affiliated news outlets, irritated the Palestinian Authority (PA) leadership in Ramallah. This provocation raised the intensity of the disagreement and made public the differences that existed between the two camps.

In the same interview, Shaath added, “I asked for an explanation about Dahlan’s recent visit to Cairo and his meeting with Defense Minister Sisi, to which the Egyptian ambassador to the PA replied that Sisi met with Dahlan in his capacity as member of an Emirati delegation and not as a Palestinian representative.”

But one of the same Fatah sources, who requested anonymity, told Al-Monitor: “Dahlan’s visit came as part of an Emirati delegation, but a separate meeting took place with the Egyptian leadership led by Sisi, during which many dossiers were discussed pertaining to the Gaza Strip. [During the separate meeting] the Egyptian leadership submitted an initiative meant to achieve reconciliation inside the ranks of Fatah, an initiative welcomed by Dahlan but rejected by President Abbas.”

Jamal Muheisen, a member of Fatah’s Central Committee, confirmed in a Feb. 17 interview with Al-Quds Al-Arabi that his movement rejected any Arab efforts to reinstate Dahlan to his former post. Muheisen expressed hope that those Arab countries would stop trying to intrude upon the movement’s internal matters. He said, “Any person working for Dahlan will be interrogated in detail and expelled from the movement. There are some individual members of the movement working for Dahlan in the Gaza Strip, among them members of the movement’s Revolutionary and Legislative Councils.”

Fatah’s Central Committee is threatening to expel members and terminate public servant salaries paid by the PA as a means to curb Dahlan’s popularity in the Gaza Strip. The tactic is beginning to prove effective, according to Al-Monitor’s sources.

Ashraf Jomaa, a senior Fatah figure in Gaza who is close to Dahlan, accused the Central Committee of ostracizing some figures from various leadership roles.

“Fatah’s Central Committee has not adopted a clear-cut strategy. Furthermore, its members are suffering from a state of disorientation, confusion and lack of prescience, leading them to create conflicts within the movement,” Jomaa told Al-Monitor.

Abbas, on more than one occasion, has restructured the so-called Supreme Leadership Committee, excluding from its ranks anyone suspected of being loyal or sympathetic to Dahlan.

Speaking to Al-Monitor, committee member Noha al-Bahaisi rejected the accusations made by Fatah members about the Leadership Committee being prejudiced and exclusionary of anyone close to Dahlan and his associates. She said, “Our work encompasses all, and we do not exclude anyone, on the condition that they recognize the legitimacy of Abbas’ leadership of the movement, and pursuant to the internal rules and regulations of the movement. All those who publicly talk about the differences in this manner are trying to cause rifts within the movement. We are striving to mobilize the movement as a whole to counter all the difficulties that we have faced after our work was halted following Hamas’ takeover of the Strip.”

Some leaders loyal to Dahlan think that the recent public criticism of Dahlan by Central Committee members is an attempt to gain favor with Abbas, following news about him conducting consultations to appoint a vice president.

One of the most prominent Dahlan loyalists, Samir al-Mashharawi, who resides in Egypt, penned an article in defense of Dahlan. He wrote, “Shaath has lost his political compass, and attacked the Egyptian state in his private meetings in Gaza. With his right hand, he swore unprecedented allegiance and love for Abbas by criticizing Dahlan. But with his left, without knowledge or forethought, he sharpened the stake on which he impaled himself by attacking Egypt and embarrassing Abbas when it came to the Saudis, Emiratis and others. The man, for the sake of gaining significance, lost his mind and is no longer able to discern right from wrong. His hunger for greatness is leading him astray from the righteous path.”

The number of PA employees who worked in the Gaza Strip prior to Hamas’ takeover exceeded 70,000, the majority of them members of Fatah. This fact gives Abbas’ camp leverage against the Dahlan faction, ensuring that those employees refrain from publicly acting against Abbas for fear that their salaries be withheld.

The same sources told Al-Monitor that the Central Committee delegation that visited the Gaza Strip agreed to resolve some of the problems faced by the movement’s members in Gaza, among them agreeing to grant military and civilian employees the pay raises that were frozen when former Prime Minister Salam Fayyad’s Cabinet was formed, and reinstate a number of military staff included in the so-called discharges of 2005.

For its part, Hamas is trying hard to refrain from making any statements about internal Fatah conflicts. Fatah figures have described the current state of affairs as a honeymoon period for Hamas, given that Fatah is wallowing in its own internal problems and unable to add to the pressure felt by Hamas as a result of the Israeli-Egyptian siege on Gaza.