The conference on the Palestinian cause held in Ain Sokhna in Egypt stirred controversy among Fatah members supporting Palestinian President Mahmoud Abbas and supporters of dismissed Fatah leader Mohammed Dahlan. 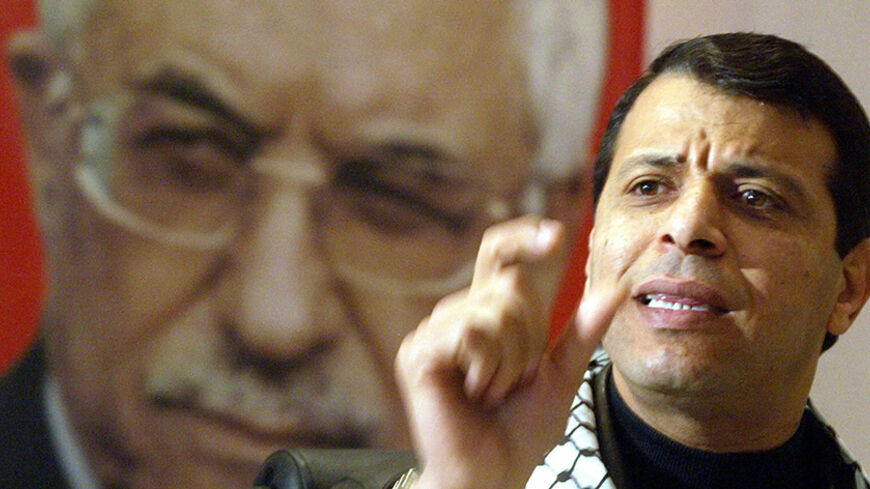 GAZA CITY, Gaza Strip — Oct. 18 was the last day of the Egypt and the Palestinian Issue conference, which was held for the first time at the invitation of the National Center for Middle East Studies at the Ain Sokhna Red Sea resort to discuss the Palestinian cause and the situation in the Gaza Strip.

The conference was met with rejection by supporters of Palestinian President Mahmoud Abbas inside the Fatah movement, under the pretext that it was funded by his sworn enemy, Mohammed Dahlan, a Fatah leader who was dismissed from the movement June 12, 2011.

About 130 parliamentary figures, academics, researchers, former ministers and political analysts from the Gaza Strip were invited by the national center to attend the conference that took place over three days, starting Oct. 16. But only 80 people attended, in addition to other Egyptian figures, in light of the controversy, according to Ashraf Jomaa, a parliamentarian in Fatah’s Legislative Council who was among the conference attendees.

“There have been rumors and unjustified attacks on the conference, claiming that it was led by figures affiliated with Dahlan. However, the conference sessions were held in the presence of Egyptian experts who are well-versed in the Palestinian cause, which is further proof that said claims are unfounded. The conference discussed the issues of interest to the Palestinian people, namely the closure of the Rafah crossing and the Palestinian division. The attendees who met during the three-day conference have agreed to set strategic targets and visions,” Jomaa said.

He continued, “The conference outputs were: strengthening Palestinian national unity; achieving internal reconciliation by what has been agreed upon; completing the national liberation project to get rid of the Israeli occupation; working on establishing a Palestinian state with Jerusalem as its capital; mobilizing Arab, regional and international support for the Palestinian cause, which ought to be placed back at the forefront of the regional issues; supporting the Palestinian political leadership in its diplomatic and international endeavors and steps; and finding a solution to the crises in the Gaza Strip, namely a solution to the Rafah crossing as well as improving the electricity sector in the Strip.”

Jomaa noted that the conference also discussed the issue of the Fatah movement and reinstating its leading role in the Palestinian issue. “The strength of Fatah is the strength of the homeland. This is why the conference discussed its current situation as part of rebuilding the national movement with all its denominations. Fatah is the backbone of the Palestinian national project,” he said.

Ibrahim Abu Naja, a Fatah leader who supports Abbas, told Al-Monitor that his movement has decided not to take part in any project that it was not briefed on or consulted about.

“The conference dealt with the Palestinian issue, which is a matter that concerns its legitimate leadership. It also discussed the situation of the Fatah movement, which also has its own leadership. We will not accept anyone discussing our issues without prior coordination and consultation with us, which we deem as interference in our own domestic issues. This is why we expressed reservations about taking part in the conference,” Abu Naja said.

Political analyst Reham Owda told Al-Monitor, “The Ain Sokhna conference negatively reflected on the relations within Fatah. The movement’s central leadership, which is based in Ramallah, saw it as a test of the loyalty of Fatah’s supporters and public figures residing in Gaza with regard to the president of the movement and the Palestinian Authority [PA], Mahmoud Abbas.”

“I also believe that the Ramallah-based Palestinian leadership considered any participation in the conference as a criterion to categorize the political inclination of the public figures in terms of their affiliation to the pro-Dahlan camp, which prompted some of the figures who were invited to decline such an invitation at the last movement for fear of being classified as supporters of the Dahlan camp,” she added.

Owda further said that the conference timing came at a critical period, as domestic and popular criticism of Abbas was at its height following his attendance at Shimon Peres’ funeral on Sept. 30. This is not to mention the rising voices opposing his politics and the calls for the need to prepare for a post-Abbas period.

Owda said, “This has aroused the suspicions of the pro-Abbas camp within Fatah and that of the PA, that the conference might have been a ruse to reach an agreement among the elite attendees as to a figure to replace Abbas, such as Dahlan, or to prepare for a new phase.”

Owda, however, does not believe that the conference will have any strong impact on Abbas’ authority or Fatah’s, as it was held by unofficial Egyptian parties that do not have any power to impose any decision on the PA or change the situation inside Fatah.

“The conference role served as a mere poll to gauge the views of the elite class in the Gaza Strip and a research study discussing the status quo and drawing analysis and predictions of the political issues in the Middle East. I do not believe the Egyptian government is concerned with the deterioration of its relations with the PA, Abbas and the Fatah leaders,” she said.

The Ain Sokhna conference has shed further light on the ongoing deepening disagreements within Fatah’s ranks, mainly between the pro-Abbas camp and Dahlan’s supporters. However, only time will tell who has won this round of the battle.