Will Fatah’s upcoming conference do more harm than good?

There are fears among Palestinians that the seventh Fatah conference to be held Nov. 29 will lead to an organizational split. 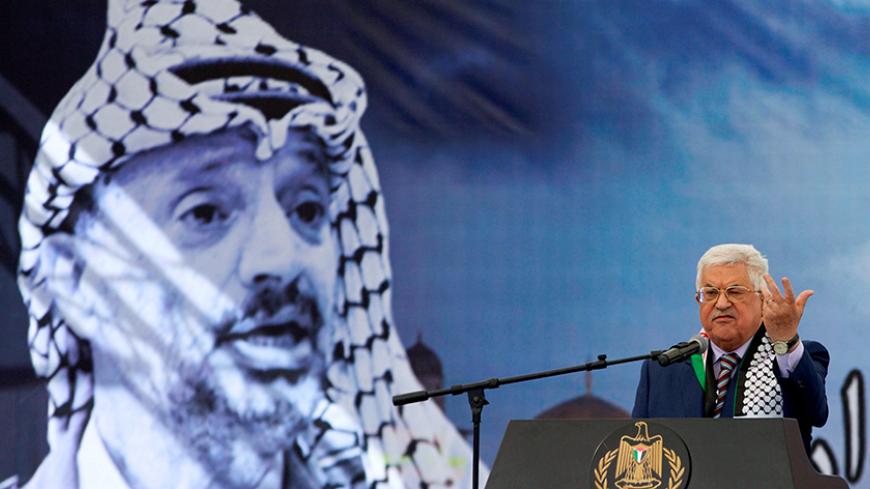 GAZA CITY, Gaza Strip — The seventh Fatah conference, to be held Nov. 29, is drawing the attention of the movement itself and of the Palestinian street in light of the division and internal conflicts plaguing Fatah. Fatah’s internal division reached its peak in the past few months when on Sept. 28 Fatah head Mahmoud Abbas dismissed Fatah leaders and cadres on charges of delinquency and on Oct. 25 withheld the salaries of others based on the same charges.

The announcement of the conference, in which 1,300 Fatah leaders and cadres are expected to participate, comes after a two-year delay caused by internal disputes and incomplete preparations. In this context, Article 43 of Fatah’s statutes stipulates, “The Central Committee calls for a regular session [of the general conference] once every five years. This session can be postponed by force majeure, following a decision by the Revolutionary Council.”

Maqboul said that Abbas has been making contacts in the past few days to ensure that all the cadres and leaders currently residing outside the Palestinian territories and Gaza, and who were invited to the conference, will attend. He further noted that the conference will discuss important issues on the internal level of the movement, including the election of leadership bodies, the general Palestinian situation, as well as several amendments that will be made to Fatah’s internal statutes. These amendments will mainly focus on the conditions set for choosing the members of the Revolutionary Council in case of death or absence of one of the members.

Maqboul confirmed that the conference will not discuss the issue of dismissals on charges of delinquency, considering that the dismissal of one or 10 members (in reference to those who were dismissed for belonging to Dahlan’s current) will not affect a movement that is more than 50 years old.

Abdel Hamid al-Masri, a Fatah leader who was dismissed on charges of delinquency, expects the same. Speaking to Al-Monitor, he said it was unlikely that the conference will discuss the dismissal file, describing the conference as exclusionary and destructive. As Fatah is suffering from deep internal disputes, while another major current is denied participation, Masri expects the conference to be another step toward further schism within the movement.

Masri also held Abbas and his officials responsible for the state of division plaguing the Fatah movement today. He denied media reports saying that supporters of dismissed leader Dahlan are preparing to hold their own conference in response to the seventh Fatah conference, saying, “We have many options in this regard, but we will not reveal them at the moment.”

Ashraf Jomaa, a Fatah parliamentarian who is close to Dahlan, said in a Nov. 3 statement for local paper Felesteen that as long as the Fatah division is not addressed and the recommendations of the previous conference — which mainly stipulate that the next conference not exclude any Fatah figure — are ignored, holding the current conference will be a real national catastrophe and the Fatah movement itself will pay the price.

Political analysts and experts believe that the state of division plaguing Fatah will be exacerbated after the conference. This is evidenced by the facts on the ground.

In this context, Riyad al-Astal, a political science professor at Al-Aqsa University in the Gaza Strip, expects the movement to face a complete split at its organizational base after the conference. This is because the young leaders who are close to Dahlan reject the control the founding generation of Fatah has on the Fatah leadership. He expects the current that rejects the seventh conference to hold a parallel conference.

Astal told Al-Monitor that the decisions issued during the seventh conference will be at the advantage of the existing Fatah leadership, which seeks to get rid of Dahlan’s current. He also warned that the Fatah movement will face difficulties in its relations with the Arab Quartet (Saudi Arabia, Egypt, Jordan and the United Arab Emirates), as it backs the return of Dahlan to the movement.

Political analyst Mohsen Abu Ramadan said that the conference’s decisions will be important, as they will reflect on the internal situation of the movement, on the Palestinian political system and on relations with Israel.

Abu Ramadan ruled out any possible dialogue between the current Fatah leaders and those of Dahlan’s current. This seems to confirm that after the conference, the internal relations in Fatah will be heading toward a split, not reconciliation.

The Fatah movement will be facing its ultimate test at the end of November. Many agree that the movement will face the biggest organizational schism since its inception in 1965 as Abbas continues to ignore all efforts aimed at reconciliation with Dahlan.