As Fatah convenes its leadership conference today, excluded leader Mohammed Dahlan and his current have promised to hold a parallel conference. 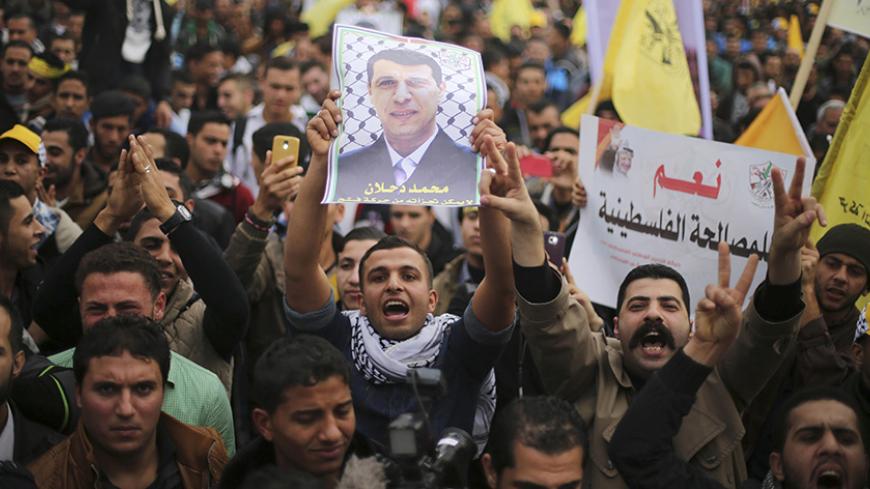 GAZA CITY, Gaza Strip — The internal Fatah conflict continues between the current affiliated with President Mahmoud Abbas and another headed by dismissed Fatah leader Mohammed Dahlan. Everyone in Dahlan's camp has been excluded from participating in the seventh Fatah conference held today, Nov. 29, in Ramallah.

The Dahlan current, the so-called reformist current, protests the convening of the conference amid Abbas’ rejection of Arab efforts to reconcile with Dahlan and the president's insistence on excluding all those affiliated with Dahlan’s current from the conference. The conference’s attendees will number 1,400, far fewer than the 2,355 of Fatah's last conference held in August 2009.

Supporters of Dahlan’s current have threatened to take action in response to being prevented from participating. Ashraf Jumaa, a parliamentarian close to Dahlan, told Al-Monitor that the Dahlan current is preparing to hold a conference in parallel to the one Fatah is holding in Ramallah. The second conference will also be called the “Seventh Conference of the Fatah Movement,” according to Jumaa.

Jumaa said that the figures participating in the parallel conference come from all levels of the Fatah organization. He added that the conference's date has not yet been determined and that it will likely be held in Egypt or a European country if it cannot be held in the Gaza strip.

He stressed that the reformist current will unveil many surprises during and after the parallel conference, which he described as the “real” seventh conference of the Fatah movement. He also shared that a major Fatah figure he did not identify will chair the conference, which will cover organizational issues within Fatah and the internal disputes.

Parliament member Naima Sheikh Ali, who was dismissed from Fatah, told Al-Monitor, “We chose to hold a parallel conference after Arab and factional efforts failed to end the rift between President Abbas and dismissed leader Dahlan, and after [Abbas and his camp] proceeded toward holding the seventh conference, which will be devoid of all voices that oppose President Abbas.”

Abbas seems to reject any reconciliation with Dahlan for fear of strengthening his chances of succeeding him as president.

Ali acknowledged that officials and supporters of the reformist current in the West Bank could be harassed, arrested, banned from traveling or have their salaries cut off. She said that on Nov. 21, the security forces in some West Bank refugee camps, specifically the camps in Nablus, placed figures affiliated with the reformist current, namely Ahmad Jaber, Hani Abu Salem and Hazem al-Titr, under house arrest and have cut off their salaries.

The Fatah movement has made light of the reformist current's plan. Ahmed Abdel Rahman, a member of the Fatah Advisory Council, told Al-Monitor, “The call to convene a parallel conference in an Arab or European country is worthless. The goal of all of the steps taken by figures dismissed by Fatah is to portray that Fatah is suffering from an organizational split. Whoever wants to set up an organization on his own can do so. Fatah has seen many organizational splits in the past, but they did not affect its journey of more than 50 years.”

Abdel Rahman said that he was surprised that some dismissed officials (such as Majed Abu Shemala, among others) are insisting on working to return to the movement after they criticized the Abbas-affiliated leadership.

He added that here is no place in Fatah for those who break its rules, which include making autonomous decisions free from any outside interference. He pointed out that his movement rejects external Arab interference in its internal affairs, just as it refuses to intervene in the internal affairs of other Arab countries.

Speaking to Al-Monitor, Mukhaimer Abu Saada, a political science professor at al-Azhar University in Gaza, said that the reformist current holding a parallel conference shows that the Fatah movement is undergoing an organizational split between the Dahlan and Abbas currents. He discounted the possibility of a reconciliation between the two currents as long as Abbas is at the top of the Fatah pyramid.

He expects that one of the "surprises" the reformist current is planning is the announcement of a Palestinian national dialogue to be hosted by Cairo.

He said that Abbas’ current cannot thwart the efforts of the Dahlan current, pointing out that all Abbas can do is dismiss, arrest or cut off the salary of anyone proven to belong to Dahlan’s current.

In the same context, Akram Atallah, a political writer and analyst in the Palestinian newspaper Al-Ayyam, told Al-Monitor that the reformist current's announcement of a parallel conference indicates irreconcilable differences between the two currents, a divorce whose harbingers were clear in recent weeks with the exclusion of officials and members affiliated with the reformist current from the Fatah conference.

He expects to see in the near future an organizational and media conflict between the two currents, and each of which will try to show that it is the true representative of the Fatah movement. He also expects several Arab countries to support Dahlan in light of Abbas’ rejection of Arab efforts to help them reconcile.

On Nov. 22, unnamed Fatah sources revealed to Safa that Abbas-affiliated security agencies in the West Bank have begun arresting Dahlan's supporters in a sign that Abbas and his current are likely to fight the moves of Dahlan’s current with all their strength.