Abbas comes out of Fatah congress stronger than ever

The Fatah seventh congress concluded without any changes: Mahmoud Abbas strengthened his position within the movement, and the former leaders remained in their positions. 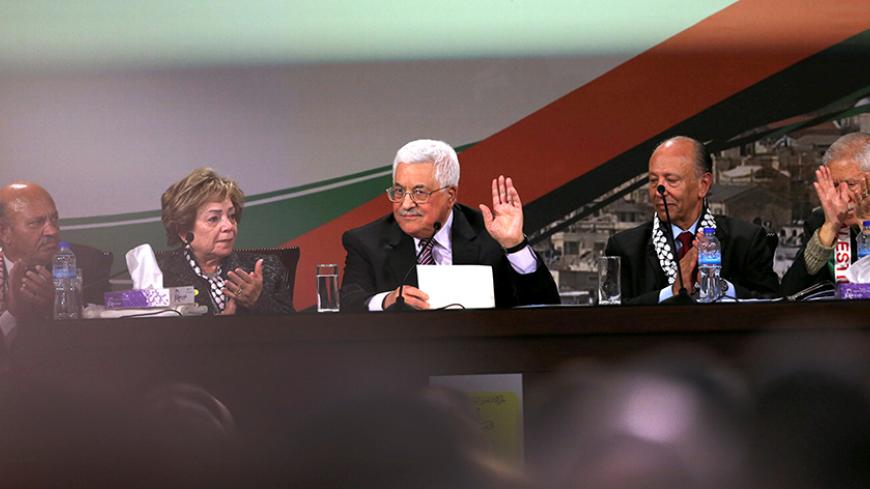 RAMALLAH, West Bank — With a standing ovation, Fatah’s seventh congress, which was held Nov. 29, re-elected President Mahmoud Abbas as head of the Fatah movement for another term of five years without conducting a ballot, as the conference had already been purged of most of his opponents.

The final results of the elections of the Central Committee, which is seen as Fatah’s executive branch and its top leadership body, maintained the membership of the most prominent names that are close to Abbas, namely Jibril Rajoub, Hussein Sheikh, Mohammed Madani, Mahmoud Aloul, Azzam al-Ahmed, Saeb Erekat and Jamal Muheisen.

Perhaps the most prominent outcome of Fatah’s seventh congress is that it has solidified Abbas’ hold on power without any rival in the presidency or in power. He was not only re-elected, but Fatah also adopted his political vision, which he put forward without any elaboration in his Nov. 30 speech. This vision is based on peace with Israel through negotiations, commitment to the agreements signed with Israel, making efforts on the international arena and promoting the popular resistance.

George Giacaman, chairman of the Ramallah-based Palestinian Institute for the Study of Democracy (Muwatin), told Al-Monitor, “Abbas has emerged from the congress stronger than before. He managed to lobby a loyal camp at the level of the Central Committee and the Revolutionary Council. His rhetoric laid the groundwork for Fatah’s political protocol, although the program’s components lack clarity and need to be detailed and elaborated.”

Giacaman said that Fatah’s conference did not bring answers to the main issue regarding the future of the Palestinian cause and the failure of the settlement plan that was launched following the Madrid Agreement in the beginning of the 1990s.

“The conference was further proof of the existing blocs and alliances that were forged to secure leadership positions inside the movement, and there was no indication of any political difference with Abbas,” he added.

Haitham Arar, a Fatah leader who lost his electoral bid for membership in the Central Committee, told Al-Monitor that the congress should have discussed at length the details and mechanisms of the political program.

Commenting on the lineup of Fatah’s Central Committee and the fact that no changes were made at the leadership level, Arar said, “The old generation that won the election was seeking to purge the new leadership [the generation of the first intifada of 1987] from the movement, which was controlling the Revolutionary Council. This is because they consider us their biggest challenge, as we compete with them for seats and positions and we are able to make a change that will live up to the aspirations of young staff.”

Nabil Amr, another candidate who failed to secure a seat in the Central Committee, said in an article published in Asharq Al-Awsat newspaper Dec. 8, “The hopes of change and renewal we have placed on Fatah’s seventh congress were hyperbolic.” He added, “With the same language of optimism, the conference decided to leave the same status quo without any changes.”

“Fatah’s conference, which came to an end a few days ago, achieved two things. It renewed the old legitimacy and displayed a show of force, whereby Abbas proved his absolute control of the movement after so much talk that the conference would bring in new blood,” Amr said.

With the end of the conference, Abbas became the undisputed head of Fatah after cutting all ties with dismissed Fatah leader Mohammed Dahlan and his allies.

“The conference turned the page on Dahlan and relayed a strong message that there is no coming back for Dahlan and his allies to Fatah,” Arar said. The conference also quelled any calls and pressure from Arab nations for the return of Dahlan.

In the same vein, Ahmed Rafik Awad, a media professor at Al-Quds University in Abu Dis, told Al-Monitor, “Fatah survived disintegration, collapse and schisms. It succeeded in renewing the legitimacy of its leaders and easing tension at the national level, which manifested in a rapprochement with Hamas and the Islamic Jihad.”

Noteworthy is that two delegations from the two movements attended the opening session of the conference, where Hamas delivered a speech that was welcomed by Abbas.

“Abbas emerged from the conference stronger than ever, before the movement and the Palestinian people as well as the Arab nations that have been pressuring him to retake Dahlan. This is why Fatah re-elected him, as he is the guarantee of the movement’s resilience and unity,” Awad added.

Commenting on the members of the Central Committee, Awad said, “There has not been any major changes in the committee’s members, especially at the seniority level. This is perhaps what the president wants, as he is capable of working with this group easily, not to mention that the movement was the one to elect them.”

Hani al-Masri, director of the Palestinian Center for Policy Research & Strategic Studies (Masarat), told Al-Monitor, “In a nutshell, Fatah’s seventh congress is a continuation of the old approach, where allegiance was pledged to Abbas through a standing ovation rather than a vote. He was re-elected as the movement’s sole leader without any elections, accountability or evaluation of the previous phase. While he emerged stronger than before, Fatah has taken a step backward after the conference.”

Although the conference solidified the position of Abbas as a leader of Fatah, there are indications that no change will be introduced to the political work of the movement, unless through a decision by the president. This is especially true at the domestic level, the reconciliation with Hamas, the reform of the PLO, the movement’s political program and the relations with Israel, which he insisted on keeping unchanged.