Fatah’s Central Committee announced the holding of the movement’s seventh conference after a seven-year absence, which would help unite Fatah’s ranks and prepare it for any future elections. 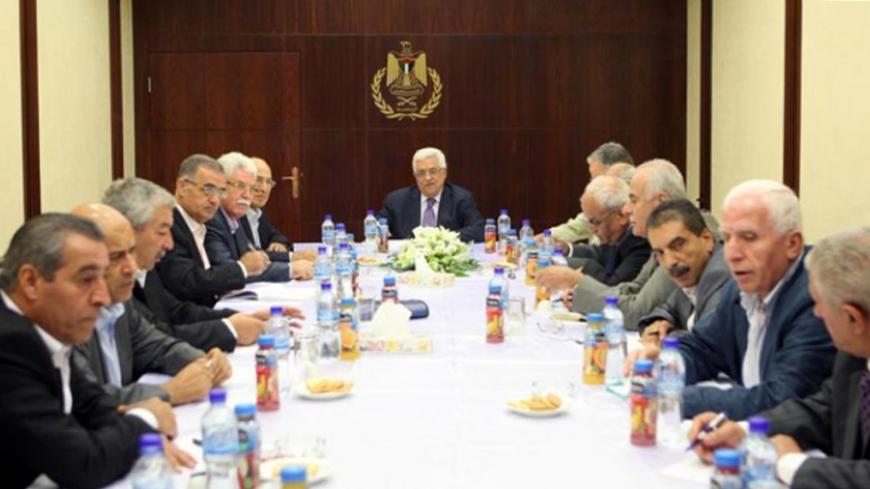 GAZA CITY, Gaza Strip — Fatah’s Central Committee held a meeting Sept. 27 headed by President Mahmoud Abbas, during which it announced that the movement’s seventh general conference will be held before the end of 2016.

Fatah, which has been leading the PLO since it was established in 1964 and the Palestinian Authority (PA) since its establishment in 1993, held its first general conference in Kuwait in 1962. The general conference is considered one of Fatah’s most important internal events, during which the movement’s internal situation is discussed and changes in its institutions and amendments to its political program are made in accordance with local, regional and international conditions. In addition, the movement’s internal elections are held during this conference in order to choose its new leader and the members of its Central Committee and Revolutionary Council.

Fatah held its sixth conference in 2009, and its seventh conference should have been held two years ago, in 2014. Article 43 of Fatah’s statutes stipulates, “The Central Committee calls for a regular session [of the general conference] once every five years. This session can be postponed by force majeure, following a decision by the Revolutionary Council [which represents the movement’s legislative committee].”

The Central Committee has finally decided to hold the conference, only a few month after a document was leaked in June. This document was said to have been addressed to the secretary-general of Fatah’s Revolutionary Council, Amin Maqboul, bearing the signatures of 47 out of the 81 members of the council. These called for holding an emergency meeting and specifying a date for Fatah’s seventh conference in order to settle the movement’s internal issues, while threatening to take action in the future should their request be left unanswered.

In this context, Maqboul told Al-Monitor, “The Central Committee decided to hold the conference on Nov. 29, but the date has not been officially set yet. This matter is left to the committee in charge of preparing for the conference, which is scheduled to meet on Oct. 29.”

He added, “The seventh conference was initially supposed to be held in August 2014, but it was postponed due to unforeseen circumstances, such as the latest Israeli war on Gaza in 2014 and the movement’s failure to hold Fatah’s provincial elections in the Gaza Strip over the past years [during which Fatah leaders are elected in all provinces]. These elections were not held as a result of the conflict between Abbas’ supporters and sympathizers of dismissed leader Mohammed Dahlan. The provincial elections must be held in order to prepare for Fatah’s general conference.”

Maqboul explained that holding provincial elections is an important prerequisite to prepare for the conference, according to the movement’s statute, as the provinces’ representatives are the ones who will elect the movement’s new leader and the members of the Revolutionary Council and the Central Committee during the general conference.

A Central Committee member who attended the Sept. 27 meeting told Al-Monitor on condition of anonymity, “Most Fatah leaders believe that holding the conference has become an urgent requirement that can no longer be delayed, to unite the movement in preparation for any public elections [legislative or presidential] that could take place during the next stage, against Fatah’s strong rival, Hamas.”

Political analyst Talal Okal also believes that the purpose of this conference is to unite the ranks within Fatah and solve its internal problems to confront Hamas in any future elections.

He told Al-Monitor, “The announcement to hold the conference was the result of Arab pressure, led by Egypt, to unify Fatah’s ranks and achieve reconciliation with Dahlan, to confront Hamas in any future elections.”

Okal also believes that Fatah has to assume major responsibilities during this conference — most importantly, regaining the movement’s position as the leader of the Palestinian national project. This requires settling its internal situation, pushing the younger generations toward leading positions and adopting a new national strategy to confront Israel.

However, Okal does not think all these problems can be solved through the conference. “The sixth conference did not improve Fatah’s situation back in 2009 when the Palestinian street lost its trust in Fatah after negotiations with Israel flunked and corruption prevailed within the movement as it failed to push young figures to leading positions. This proves that the movement is unable to solve its internal problems. This is why I believe internal conflicts would remain the same or even deepen, especially the Abbas-Dahlan conflict,” Okal said.

For his part, political science professor Mukhaimer Abu Sada at Al-Azhar University in the Gaza Strip told Al-Monitor, “I think President Abbas does not want reconciliation with Dahlan and such a conference is intended to emphasize the exclusion of Dahlan’s current from Fatah.”

In this vein, Maqboul said, “Solving Fatah’s problems is linked to holding the provincial elections and unifying the movement’s ranks, as well as renewing the leadership by pushing forward young faces to take the lead. This would most definitely reflect on the movement’s performance in any future Palestinian election. However, reconciliation between Abbas and Dahlan will not be part of the seventh conference’s discussions or results, because he [Dahlan] was dismissed from the movement and he is wanted by the Palestinian judiciary for taking part in the murder of civilians and being involved in financial corruption.”

In this regard, Abu Sada believes that the ongoing estrangement between Abbas and Dahlan would negatively affect the movement in any future election, which would bode well for Hamas.

It seems that Abbas does not want to face Hamas in any new election before Fatah holds its seventh conference and tries to resolve its internal issues by pumping new blood into leading positions and rearranging the movement’s situation. This was made clear when the Palestinian government in Ramallah issued a decision on Oct. 4 to postpone the local elections for four months, after they were initially scheduled to be held this month.