The latest Palestinian reconciliation efforts between Fatah and Hamas hosted by Qatar have failed, but the reason may have come from outside the talks. 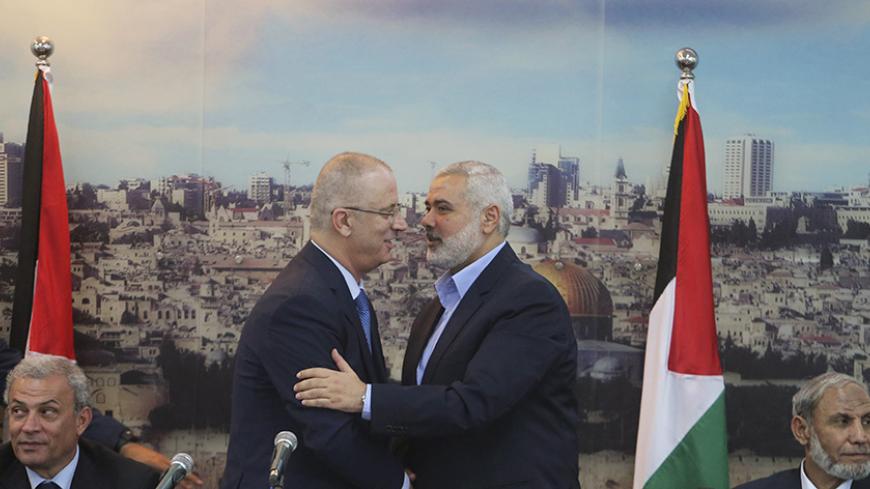 GAZA CITY, Gaza Strip — On June 18, Fatah and Hamas announced the failure of the Palestinian reconciliation talks between them. These talks were hosted by Doha on June 14 and were aimed at implementing the terms of the Beach Refugee Camp Agreement signed between the two movements on April 23, 2014.

These terms included forming a Palestinian consensus government tasked with preparing for the Palestinian presidential and legislative elections within six months as of the formation of the government, activating the role of the Palestine Liberation Organization within five weeks as of the signature of the Beach Refugee Camp Agreement and ending the political detention policy in the West Bank and the Gaza Strip. According to this agreement, President Mahmoud Abbas must call for convening the Palestinian Legislative Council, inactivated as a result of the Hamas takeover of the Gaza Strip in 2007.

Ever since the signature of this agreement, major differences have arisen between Fatah and Hamas on several important issues within the scope of the reconciliation. Hamas did not hand over management of Gaza Strip border crossings and the consensus government did not disburse the salaries of Hamas-hired civil servants after Hamas’ advent to power in Gaza in 2007. Therefore, neither party executed the rest of the terms.

The talks in Doha on Feb. 7-8 came as an extension of other meetings, which brought together the Palestinian rivals under the auspices of Qatar. A positive atmosphere prevailed during these meetings that ended with an agreement between Hamas and Fatah to hold further meetings, in an effort to reach an understanding to resolve all outstanding problems between them.

Amin Maqboul, the secretary-general of Fatah's Revolutionary Council, slammed Hamas, calling it “intransigent.” He told Al-Monitor, “The last meeting in Doha failed because Hamas does not want to implement what has been agreed upon in all previous understandings.”

He said, “Hamas wants to resolve the issue of the civil servants it had hired after taking control of Gaza in 2007 by placing them on the Palestinian Authority civil servants payroll. At the same time, Hamas seeks to remain in power in Gaza and to keep managing the border crossings. It refused to adopt the PLO political program regarding the national unity government, although this had been agreed upon in advance.”

Maqboul confirmed that Fatah proposed to look into the civil servants issue if Hamas waives power over the Gaza Strip and hands over the crossings. He said, “Hamas refused our proposal and asked us to take steps that meet its interests before relinquishing power in Gaza and handing over the crossings, including activating the [Palestinian] Legislative Council and settling the Hamas-hired civil servants issue.”

It should be noted that Hamas won a majority of seats in the Palestinian legislative elections in 2006.

A senior Hamas leader told Al-Monitor on condition of anonymity, “The meetings in Doha failed as a result of the withdrawal of the Fatah delegation from the reconciliation sessions and Fatah’s unwillingness to continue the talks.”

He added, “We felt that Fatah has renounced its decision to solve pending problems — in particular the problem of Hamas-hired civil servants and the reactivation of the Palestinian Legislative Council. Hamas refused to accept the agreement that was signed between the Palestinian factions in Cairo in 2011.”

On Maqboul’s accusations of Hamas refusing to adopt the PLO political program of forming a national unity government, he said, “This political program recognizes the Quartet's conditions, imposing on Palestine to recognize the State of Israel, which Hamas categorically refuses.”

The International Quartet Committee was established in Madrid in 2002 and played a mediating role in the peace process in the Middle East. The Quartet seeks to establish a Palestinian state living side by side with Israel. The Quartet is composed of the United States, the European Union, Russia and the United Nations.

According to the Quartet agreement, Israel shall respect the establishment of a Palestinian state with provisional borders and freeze settlement activities in the occupied territories, while the Palestinian side must prosecute the resistance movement and prevent terrorism in cooperation with Israel. However, the Quartet committee’s plan has yet to be implemented.

The Hamas leader also accused Fatah of “trying to exclude Hamas from the political scene and implement the US-Israeli agenda that aims to push Hamas to recognize Israel.”

He added, “If the talks between Hamas and Fatah had succeeded, a meeting was supposed to be held between President Mahmoud Abbas — who arrived in Doha on June 16 — and Khaled Meshaal — the head of Hamas’ political bureau — who lives in Doha. But after the failure of these talks, Abbas refused to meet with Meshaal.”

Political analyst Talal Okal did not expect the Qatari reconciliation efforts to bear fruit. He told Al-Monitor, “There is no national will to end the division. Hamas and Fatah are not putting the national interests first and are focusing on partisan narrow interests, which hinders the reconciliation.”

Okal said, “Egypt is the most capable of settling the reconciliation issue, not only because of its geographical connection with the Palestinian territories, but also because it is the sponsor accepted by both Hamas and Fatah — which is not the case for Qatar that does not have strong ties with Fatah.”

The aforementioned senior Hamas leader held that Egypt contributed significantly to the failure of Qatar’s efforts to end the Palestinian division, by pushing Fatah not to pass or approve any agreement under Qatar’s auspices.

Egyptian newspaper Al-Youm Al-Sabeh had revealed June 12 that Azzam al-Ahmad, the head of the Fatah delegation on reconciliation talks, secretly visited Cairo and met with Egyptian officials to discuss the reconciliation, before heading to Doha to meet with the Hamas delegation at the recent talks.

Maqboul noted that Egypt and Qatar are working on the Palestinian reconciliation issue without any coordination and by exerting separate efforts that do not include any joint arrangements.

“Egypt is the main sponsor of the Palestinian reconciliation and is capable of dealing with this issue since it had sponsored the Cairo Agreement in 2009,” Maqboul said.

For his part, political analyst Hassan Abdo told Al-Monitor, “The Palestinian reconciliation efforts in Doha were bound to fail. I saw no reason why these talks should have succeeded. No new factors and variables emerged and this is why the reconciliation failed.”

He added, “Everyone was expecting the failure of these talks. Egypt’s opinion may not be neglected. Cairo believes that the Qatari role in the reconciliation issue is contrary to the Egyptian efforts. There is no coordination of reconciliation efforts whatsoever between Egypt and Qatar. Before heading to Doha, Fatah and Hamas did not demonstrate any flexibility toward their previous positions on their outstanding issues.”

In light of these complexities marring the Palestinian reconciliation, it seems that ending the Palestinian division is no longer just a matter of internal Palestinian will, but is rather subject to the compatibility of the positions of Fatah and Hamas’ regional allies, namely Egypt and Qatar. This seems to be far-fetched in light of the deteriorating relations between these two countries.