Hamas and Fatah are focusing on trivial issues instead of taking advantage of former President Jimmy Carter’s efforts to achieve reconciliation between the two Palestinian movements. 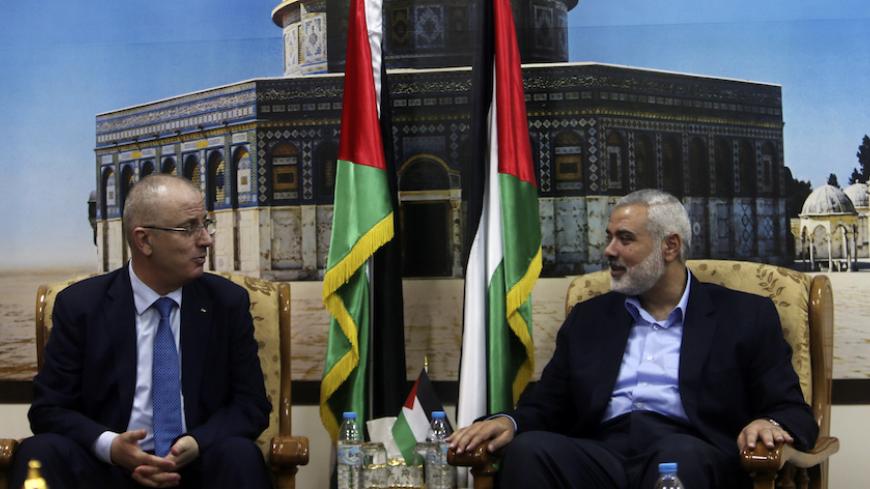 RAMALLAH, West Bank — Former US President Jimmy Carter is seeking to get the stalled Palestinian reconciliation moving by urging Saudi Arabia to use its influence, as the kingdom expressed its willingness to mediate again between Fatah and Hamas during Carter’s visit to Saudi Arabia in March.

Carter, who heads The Elders, said during a May 2 meeting with President Mahmoud Abbas at the Muqata compound in Ramallah, the Palestinian Authority’s presidential headquarters, that the talks focused on the possibility of holding Palestinian elections and implementing the Beach Refugee Camp Agreement between Fatah and Hamas. He also expressed “The Elders’ readiness to make major efforts to implement all that has been mentioned in this agreement.”

For security reasons, Carter was not able to visit the Gaza Strip and meet with Hamas officials, but communication between the two parties did not stop.

Regarding what Carter had brought up during his recent visit, a Palestinian official source told Al-Monitor on condition of anonymity that Carter is one of the personalities who previously sought to complete the reconciliation between Fatah and Hamas. The official went on, “According to our information, Carter asked Saudi Arabia to activate its role in the reconciliation file and it expressed its consent, so long as the two parties provided guarantees and showed seriousness,” especially in light of Saudi Arabia’s experience in the Mecca agreement.

Riyadh had sponsored the Mecca agreement signed between Hamas and Fatah on Feb. 8, 2007. It resulted in the formation of a national unity government headed by Prime Minister Ismail Haniyeh. However, this government did not last for long, as armed clashes broke out between the two movements June 7, 2007, resulting in Hamas’ takeover of the Gaza Strip and Abbas’ declaration of a state of emergency.

Ziad al-Zaza, a member of Hamas’ political bureau, told Al-Monitor, “Carter had contacted Saudi Arabia and urged it to intervene in order to implement the Mecca agreement, and he delivered messages to us and to President Abbas regarding the Saudi approval to sponsor the reconciliation.

“Saudi Arabia has sent us and President Abbas letters asking for our consent to reactivate the Saudi role in the reconciliation and show seriousness concerning this issue, over which we have expressed our agreement and support,” Zaza said.

He also noted that his movement welcomes Saudi Arabia’s role in sponsoring the reconciliation, even though it is stalled by President Abbas failing to implement the Cairo agreement signed by all Palestinian factions.

On Carter's motives, Zaza said, “Arab and regional parties as well as Carter found out that they cannot isolate the Hamas movement from any political and economic process, especially after the latest aggression on Gaza. These parties are now aware that the Arab and regional openness toward the movement proves the invalidity of Abbas’ statements regarding Hamas.”

On April 23, 2014, Fatah and Hamas signed a reconciliation deal — known as the Beach Refugee Camp Agreement — under the auspices of Palestine Liberation Organization factions in the Gaza Strip. The agreement stipulated the formation of a consensus government that would pave the way for elections after six months.

The consensus government was sworn in June 2, 2014, but has failed to prepare for presidential and legislative elections as stipulated. The two movements have also failed to implement the rest of the items detailed in the agreement, including social reconciliation, developing the PLO, holding elections and resuming the work of the Palestinian Legislative Council.

Nimer Hammad, Abbas' political adviser, told Al-Monitor that there are Arab and international efforts and demands, such as those expressed by the Kingdom of Saudi Arabia, to end the division.

“The truth behind the dispute between Hamas and us is the presence of two programs and Hamas’ refusal to relinquish its control over Gaza,” he noted, adding that Abbas asked Carter “to persuade Hamas to hold presidential and legislative elections under international supervision and guarantees, and that [Carter] should get a written consent from the movement.”

However, Fatah denied any Saudi action concerning the Palestinian reconciliation. Amin Maqboul, the secretary-general of Fatah’s Revolutionary Council, told Al-Monitor, “Saudi Arabia did not make any move or come up with an initiative for a Mecca II agreement; rather, it is Hamas that is making efforts to push Saudi Arabia into playing [the mediator] role as the ties between both parties have been recently improving.

“Saudi Arabia did not propose a second Mecca agreement, and it does not wish to engage in this matter. Hamas is the one that wants and wishes this would happen, and is promoting it in the media,” Maqboul noted. “President Abbas told Carter and announced during the last Palestinian Central Council meeting that he was ready to hold presidential and legislative elections in the event of receiving a written letter from Hamas.” Maqboul added that reconciliation only requires “implementing the recent Beach Refugee Camp Agreement and enabling the government to unify the PA institutions in the West Bank and the Gaza Strip.”

Zaza expressed his movement’s readiness to participate in the elections, saying, “We are ready to hold elections, but why does President Abbas need a written letter? He is required to invite the PLO’s leadership to meet and develop the Palestinian National Council election law, and to invite the Palestinian Legislative Council to meet and approve the electoral system. The government should also create an adequate atmosphere for the elections by releasing detainees and [respecting] freedoms, and Abbas is preventing this through the security services.”

The head of the Palestinian Center for Policy Research and Strategic Studies, Hani al-Masri, who is familiar with the reconciliation file, told Al-Monitor that the latest development in Carter’s efforts was “his meeting with the Saudi king, who agreed to hold a meeting with President Abbas and [Hamas political bureau chief] Khaled Meshaal.

“Meshaal agreed to meet Abbas in a letter sent to the Saudi king with Carter, but Abbas asked Hamas for a written letter to hold the presidential and legislative elections,” Masri noted, adding that the success of the Palestinian reconciliation requires implementing former agreements, rather that signing new initiatives. According to Masri, this shows a polite and diplomatic rejection by Abbas of Carter’s efforts.

Masri said that the focus on the way elections should be held belittles the situation and proves that the elections are not a true prelude for reconciliation, which can only be achieved if national unity is implemented on the ground and solutions to many of the outstanding issues are reached.

Since Palestinian parties lack the maturity to achieve unity, the reasons that prevented the success of all previous agreements between Hamas and Fatah still exist and threaten Carter's efforts, keeping them in the reconciliation maze Palestinian, Arab and regional efforts have been lost for over eight years.