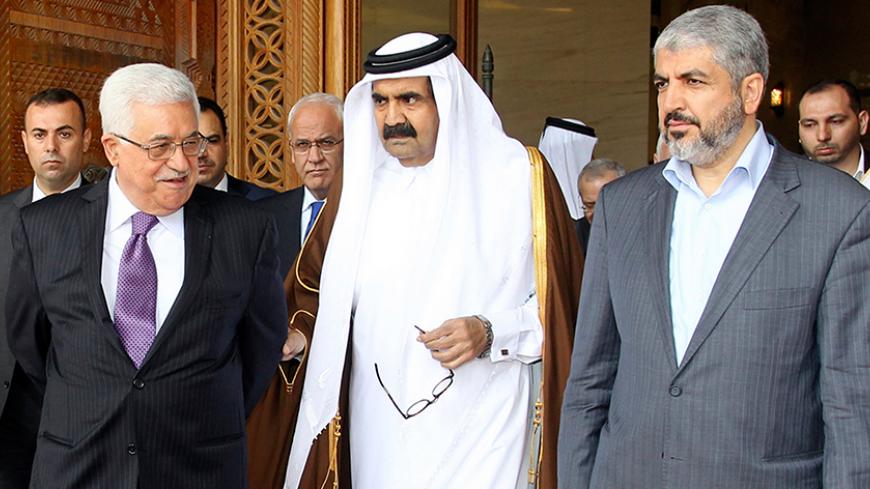 GAZA CITY, Gaza Strip — Given the repeated failures over the past nine years of negotiations, Palestinians are eager but not hopeful to see whether Fatah and Hamas will actually follow through on their latest reconciliation efforts in the face of numerous obstacles, including foreign pressure.

The groups held talks Feb. 7-8 in Doha, Qatar, to implement a nearly 2-year-old Palestinian pact known as the Beach Refugee Camp Agreement. Palestinians have voiced serious concerns about Qatar’s ability to successfully mediate the division that has persisted since 2007. They are asking: Why does reconciliation fail every time?

Since the signing of the Beach Refugee Camp Agreement in April 2014, major differences have arisen between the Islamic fundamentalist Hamas and the Palestine Liberation Organization's political faction Fatah. These issues involve managing crossings with the Gaza Strip, holding presidential and legislative elections, and setting a date to convene the Provisional Leadership Framework of the PLO.

But a source in the Hamas leadership who was briefed on the Doha talks told Al-Monitor on condition of anonymity that two issues stand out: "the government of national consensus assuming full responsibility of the Gaza Strip and the disbursement of salaries to the benefit of Gaza [government] employees appointed by Hamas since 2007."

"Hamas believes that these two issues are of paramount importance to solving other problems,” the source said.

About the established mechanisms to implement the reconciliation terms, the source said, “No specific mechanism has been agreed upon as of now. Things are still being discussed between the two movements. However, we fear many obstacles in our way might take us back to square one, as happens every time — mainly the foreign pressures on the Palestinian Authority to not implement the reconciliation terms.”

The United States is putting pressure on the PA to not reconcile with Hamas until the latter recognizes the Middle East Quartet’s conditions, including the recognition of Israel, which Hamas rejects. After the Beach Refugee Camp Agreement, US President Barack Obama said in April 2014 that President Mahmoud Abbas’ decision to form a national unity government with Hamas was “unhelpful” and undermined the negotiations with Israel.

The same source said there will be a meeting soon, though it has not yet been scheduled, that will bring together the head of Hamas' political bureau, Khaled Meshaal, and Fatah's leader, Abbas, in Doha to complete the talks. “After that, a date will be set to hold legislative and presidential elections and to convene the Provisional Leadership Framework of the PLO,” the source said.

Fatah believes Hamas has been intentionally placing obstacles in the way of implementing the Beach Refugee Camp Agreement.

Amin Maqboul, secretary-general of Fatah's Revolutionary Council, told Al-Monitor, “Hamas did not stick to the Beach Camp agreement, as it has yet to hand over the reins of power over Gaza to the national consensus government and continues to control the crossings. Should Hamas continue down this path, we have to go to the polls immediately and let the people choose who they want to rule.”

Other failed attempts at reconciliation include the Cairo Agreement in 2011 and the Mecca Agreement in 2007. So how effective will Qatar be this time? Political analyst Iyad Atallah does not pin much hope on the Doha talks.

"Even if we watch Hamas and Fatah officials shaking hands on television, announcing the achievement of reconciliation, this does not mean the end of the Palestinian division. There exist profound reasons and strategic disagreements between the two movements, most notably the issue of [government workers'] salaries and the crossings. Also, one ought to mention the different political programs and the nature of the management of the Israeli-Palestinian conflict between both sides,” he told Al-Monitor.

“Fatah, the largest party in the PLO, recognized the State of Israel in 1993 and chose the path of negotiations to end the occupation on the basis of a Palestinian state along the 1967 borders. It is also exercising security coordination with Israel as a guarantee for the continuation of the PA governance and rule. Hamas, on the other hand, did not recognize Israel. It chose resistance as an option to end occupation and to liberate the Palestinian lands occupied in 1948. Hamas rejects the ongoing security coordination between the PA and Israel. All these reasons would make any reconciliation between the two last a few weeks or a few months at best,” Atallah added.

For his part, political analyst Hassan Abdo told Al-Monitor, “The outstanding issues in terms of reconciliation, such as salaries and crossings, among other issues, are not of significant impact. There are more important obstacles in this regard. Besides the groups' political differences, the PA continues its political arrests against Islamic organizations’ members in the West Bank. Fatah is not able to stop this approach, which is its guarantee to its governance, while Hamas cannot achieve reconciliation in light of the ongoing arrests.”

In January alone, the PA arrested 93 people from the resistance factions, mainly Hamas, according to a Feb. 9 press release from the Committee for the Families of Political Prisoners and Detainees in the West Bank.

Abdo believes the Palestinian reconciliation agreement is also subject to the interest of various Arab alliances.

“Reconciliation does not lie in the hands of Palestinians alone, as it is subject to the relationship between Qatar, Hamas’ ally, and Egypt, which plays the main role in reconciliation and is allied with Fatah. However, relations between Egypt and Qatar are currently strained, as the latter had rejected Egyptian President Abdel Fattah al-Sisi’s decision to isolate former President Mohammed Morsi.

"This adversely affects the Palestinian reconciliation, in addition to the fact that some states, such as the United States and Israel, did not want this reconciliation originally," Abdo said.

Naji Sharab, a political science professor at Al-Azhar University in Gaza, told Al-Monitor, “The worsening relations between Qatar and Egypt are likely to thwart Qatar’s mediation of the reconciliation issue. This is the major problem facing Qatar’s role.”

Sharab ruled out the possibility that Qatar is seeking to snatch the reconciliation issue out of Egypt's hands.

“Qatar cannot replace Egypt in the Palestinian reconciliation issue for objective reasons, mainly since Egypt is a central state, geographically connected to Gaza and overseeing the Rafah land crossing, which is one of the obstacles hindering reconciliation. It is not possible to talk about reconciliation without Egypt.”

Palestinians hope Fatah and Hamas will seriously end the division this time. However, according to Abdo, “This can only be achieved if the two movements overcome external pressure and conflicting alliances and place the national interest at the heart of their personal interests,” which is unlikely to happen anytime soon.