The latest meetings in Doha to promote the reconciliation between Fatah and Hamas may not reach the desired results, as Egypt, which has always been a sponsor of such meetings, might not allow this. 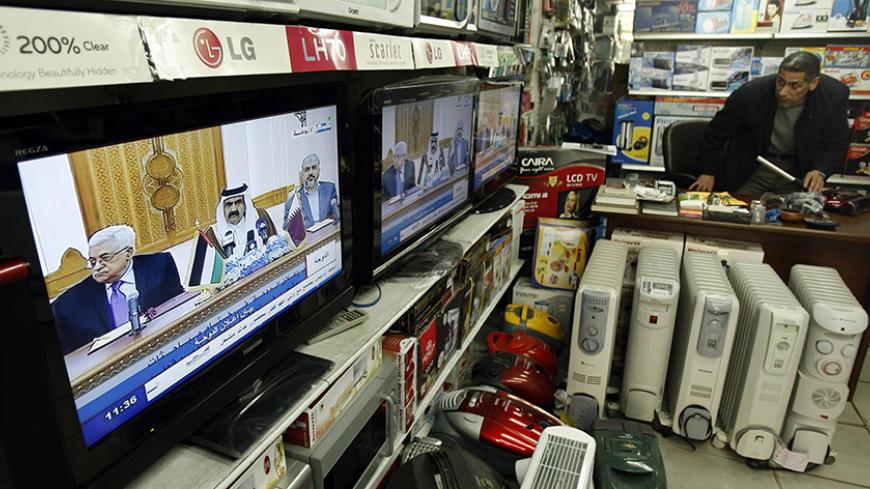 All of these agreements have failed to put an end to this division, despite being officially sponsored by Arab countries such as Saudi Arabia, Egypt and Qatar. Fatah and Hamas are both clinging to their positions and refuse to make the required concessions in order to reach common ground.

Fatah insists that Hamas should relinquish some of its power in the Gaza Strip, which it has controlled since mid-2007, and hand over the Rafah crossing to the Palestinian presidency. Meanwhile, Hamas insists that Fatah should recognize the events that have occurred since 2007, including the salary crisis for government employees in Gaza.

On Feb. 7-8, Qatar’s capital Doha, through its Foreign Ministry, was able to schedule meetings between Fatah and Hamas to discuss the mechanisms of implementing the reconciliation and address the obstacles that have prevented its achievement in the past. During the meetings, both parties discussed the mechanisms and steps to implement reconciliation within an agreed-upon timetable. The talks were held in an atmosphere of media secrecy in order to avoid any media leaks.

Meanwhile, Hamas issued a brief statement Feb. 8 in which it stated that the parties had reached a practical vision that will be discussed and agreed upon in both movements’ leaderships, with factions and national figures, in order to start implementing it on the ground. Remarkably enough, Fatah did not comment on the meetings in Doha and no statement was issued in this regard, while the Palestinian factions issued a statement on the Doha meetings on Feb. 7.

In the statement, Palestinian factions expressed their hope that the meeting would produce serious results to end the existing differences and to start the implementation of previous agreements. They also warned against repeating the same scenario of failed negotiations in light of the worsening situation of the Palestinians, the ongoing blockade and the Israeli expanding presence in the West Bank and Jerusalem.

Abdullah Abdullah, Fatah leader and head of the Palestinian Legislative Council’s (PLC) political committee, told Al-Monitor, “Reconciliation between Fatah and Hamas is subject to the latter ceding its control of the Gaza Strip. If it does not do so, there is no way that this reconciliation can be implemented. Although both parties have been making mistakes in Gaza and the West Bank, reconciliation should not be impeded. Even though the regional developments and the Israeli pressure on Palestinians make it imperative for the two sides to reach reconciliation, I cannot give the public opinion an inaccurate sense of optimism.”

In the midst of talk about reconciliation, Fatah and Hamas exchanged aggressive statements, which could undermine the reconciliation efforts. One of these statements was made by Maj. Gen. Jibril Rajoub, member of Fatah’s Central Committee, on Feb. 23 about not allowing Hamas to continue to “seize” Gaza.

On the same day, Hamas spokesman Sami Abu Zuhri said that Rajoub’s statements raise tension and do not serve the reconciliation.

Despite such statements, a Qatari official following up on the reconciliation talks in Doha told Al-Monitor on condition of anonymity, “Fatah and Hamas agreed not to speak to the media about the details of the reconciliation and avoid statements that could cause tension, in light of past experiences that had previously impeded reconciliation because of statements issued here and there.”

Meanwhile, Yousef Rizqa, the former minister of information in the previous Hamas government, told Al-Monitor, “The future of the Doha reconciliation talks does not seem positive and we cannot build [a position] upon them in light of the internal Fatah disputes over whether or not to aim for a reconciliation. It seemed to me that the meetings did not offer convincing solutions for fundamental issues, such as the future of the [government] employees in Gaza who have not been paid since 2006 or the Rafah crossing, which is constantly being closed. In addition, Egypt has not given Fatah the green light to complete reconciliation with Hamas, because it seems Cairo will not accept Qatar’s success in a matter in which Egypt has failed.”

Although after the first round of meetings in Doha both Fatah and Hamas agreed to hold a second round by the end of February, no meetings were held and no explanations were given.

A senior official in Fatah’s Central Committee, who is familiar with the reconciliation dialogue process and who spoke on condition of anonymity, told Al-Monitor on March 1, “Any new meeting with Hamas in Doha depends on the outcome of an upcoming meeting between Fatah’s Central Committee and its Revolutionary Council, which will discuss the future of interests with Hamas.”

Meanwhile, Hamas leader Ismail Radwan said Feb. 20 that Fatah and Hamas will hold a new meeting in Doha in the coming days to agree on the schedule of implementation of the reconciliation issues.

Hani al-Masri, director of the Palestinian Center for Policy Research and Strategic Studies (Masarat) in Ramallah and a prominent political analyst seeking to bridge the gap between Fatah and Hamas, told Al-Monitor, “The available information does not encourage the reconciliation in light of the existing differences within each group over whether or not to go forward with a reconciliation. There are also significant obstacles facing the implementation of reconciliation, such as the call to hold a PLC session or the formation of the next Palestinian government. However, we continue to make efforts for talks to be a success this time.”

Although the Palestinian people are in desperate need for reconciliation in light of the deteriorating political, security and economic situation in the West Bank and Gaza, reconciliation is being stalled, as the Doha meetings stopped after their first round. It seems that Hamas fears it would have to give up the Gaza Strip for Fatah to accept reconciliation and perhaps Fatah fears the wrath of Israel and Washington should it go for reconciliation with Hamas.

Yet more importantly, reconciliation could take a while since Egypt is not involved, while its No. 1 rival, Qatar, is. Thus, Cairo might not allow this reconciliation to crystallize as it believes the Palestinian affairs are an internal Egyptian issue in which no other country is allowed to interfere. It should be noted that relations between Cairo and Doha are currently tense as Qatar received icons of the Muslim Brotherhood. This could create rivalry between the two parties in achieving a breakthrough in the Palestinian reconciliation issue. However, Egypt seems reassured with regard to the stances of both Hamas and Fatah that have confirmed that the reconciliation will be made only under Egyptian auspices as it has been present since the beginning of the Palestinian split in 2007.