Fatah officials have recently threatened to retake Gaza by force, which Hamas leaders see as a step that undermines reconciliation efforts. 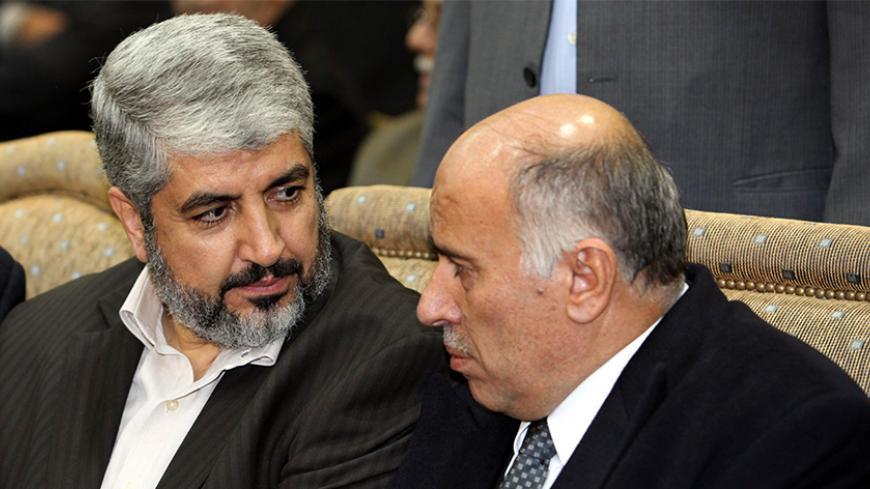 Reconciliation between Fatah and Hamas continues to sputter, following the last round of meetings in Qatar on Feb. 7-8. After the meetings, Fatah issued official statements threatening Hamas that it would regain control of Gaza by unspecified nonreconciliatory means. In that regard, it should be noted that Hamas took control of the Gaza Strip in June 2007 following bloody armed clashes with Fatah.

During a visit to Egypt on Feb. 23, Maj. Gen. Jibril Rajoub, deputy secretary-general of the Fatah Central Committee, threatened to take decisive measures to put an end to Hamas’ continued seizure of the Gaza Strip by means that would be discussed inside Fatah. Two days later, on Feb. 25, Nabil Shaath, member of the Fatah Central Committee, affirmed that Palestinian security forces would soon reassume management of the Rafah border crossing with Egypt, without specifying an exact date.

However, Ziad al-Zaza, a member of Hamas’ political bureau, was even more forceful when he said on Feb. 24 that Rajoub wanted to enter Gaza riding on the turret of an Israeli tank, despite him trying to accomplish that feat on four previous occasions during Israel’s wars against Gaza in 2006, 2008, 2012 and 2014.

Zaza based his accusations on secret documents that Al Jazeera channel had published in January 2011 from WikiLeaks, according to which President Mahmoud Abbas had previous knowledge about the Gaza War in 2008.

Husam Badran, the Qatar-based spokesman for Hamas, told Al-Monitor, “Fatah threatening to retake Gaza by other means are detrimental to the serious efforts undertaken to reach reconciliation, in light of the difficult conditions under which our people live. For such threats only serve the interests of the Israeli occupation because Gaza is not occupied for it to be retaken, and threatening the use of force is illogical as all bets aimed at changing the security situation in Gaza shall be futile.”

Questions abound about the reasons behind the statements made by Rajoub who, when compared to other Fatah leaders, enjoys relatively good relations with Hamas. He visited Gaza in January 2013 when he met with Hamas leadership figures, most notably former Prime Minister Ismail Haniyeh, prior to visiting Qatar in January 2016 and meeting with Khaled Meshaal, the head of Hamas’ political bureau.

But the location from whence Rajoub made his comments, Egypt, may hold several indications, due to the tensions that prevail in the relationship between Cairo and Hamas. Rajoub overtly praised the Egyptian regime and warned about the failure of the reconciliation, which would degrade Qatar’s role. He was fully cognizant that the Egyptians would never allow the Palestinian reconciliation to move forward at the hands of the Qataris.

Rajoub may also want to reach out to the Egyptians and confront his nemesis Mohammed Dahlan, who has great influence in Cairo. The disagreement between Dahlan, former chief of the Palestinian Preventive Security in Gaza, and Rajoub, who is the former head of the Preventive Security in the West Bank, is ongoing, especially since both men see themselves as possible successors to Abbas as the president of the Palestinian Authority (PA).

Yet the issue was not confined to personal statements made by Rajoub, for Fatah’s Revolutionary Council announced on March 4 that continued procrastination by Hamas in the reconciliation talks would compel Fatah into adopting other options to regain control of Gaza — further accusing Hamas of preventing the Palestinian government from assuming its responsibilities in Gaza.

In that context, Fahmi al-Zarir, deputy secretary-general of Fatah's Revolutionary Council in Ramallah, told Al-Monitor, “Some Hamas leaders were threatening a West Bank repeat of the 2007 events that led to its takeover of Gaza, which demonstrates their lack of intent to reach reconciliation. Despite Fatah’s adoption of the dialogue option with Hamas, it nevertheless discussed unspecified other measures to unite Gaza and the West Bank, noting that Arab intervention to regain control of Gaza from Hamas was discussed during the March 2015 Arab Summit that took place in Egypt. Though I am unaware of any plans to again discuss the issue in the Mauritania summit scheduled to be held in July [2016].”

An analysis of the situation on the ground in Gaza reveals that Fatah has several options available to retake Gaza from Hamas. First among these options would be to trigger popular demonstrations demanding the overthrow of the Hamas regime. The second would entail successive military strikes against Hamas forces inside Gaza. Both of these options would be extremely difficult to implement due to Hamas’ tight security and military grip on Gaza and the weak military and organizational presence of Fatah.

Hamas’ affiliated website, the Palestinian Information Center, stated on Feb. 25 that Fatah’s calls to retake Gaza through means other than reconciliatory ones were viewed as inciting an Israeli military strike, to complement the latter’s success in convincing Egypt to destroy the tunnels that link Gaza and the Sinai Peninsula. These steps isolated Gaza from the outside world and weakened the military resistance’s capabilities that rely on its ability to ferry weapons from abroad, namely from Iran.

A third option may also be possible, by which Abbas would ask Arab countries to adopt a decision similar to the ones relating to Libya, Syria and Yemen and send special forces to retake Gaza from Hamas.

The fourth option would be to announce the establishment of a Palestinian state, which would result in serious political problems for Hamas, who would either approve the move and voluntarily hand over Gaza to the PA or reject it, leading to Gaza being considered a renegade province that must be liberated by force. The likelihood of either option being adopted is strong, indeed, with both constituting great sources of weakness in as far as Hamas is concerned.

In that regard, political analyst Ibrahim al-Madhoun from Gaza told Al-Monitor, “Fatah’s threats to resort to force and retake Gaza are unrealistic, because the Israeli occupation is the one that employs military force against Gaza. I believe that Hamas does not take such threats seriously, for there is no Palestinian alternative to reconciliation, and any other rhetoric is unrealistic and must thus be rejected.”

In conclusion, Fatah’s threats against Hamas may go beyond media fear mongering and may become reality through one of the four options mentioned. As such, Hamas may be compelled to reach out to its regional contacts, namely Qatar and Saudi Arabia with which it has relatively good ties, to prevent Fatah from convincing Arab countries to adopt a resolution to end Hamas’ control over Gaza, either by military force, political pressure or by forcing Hamas to agree to a reconciliation agreement that may not satisfy its aspirations.