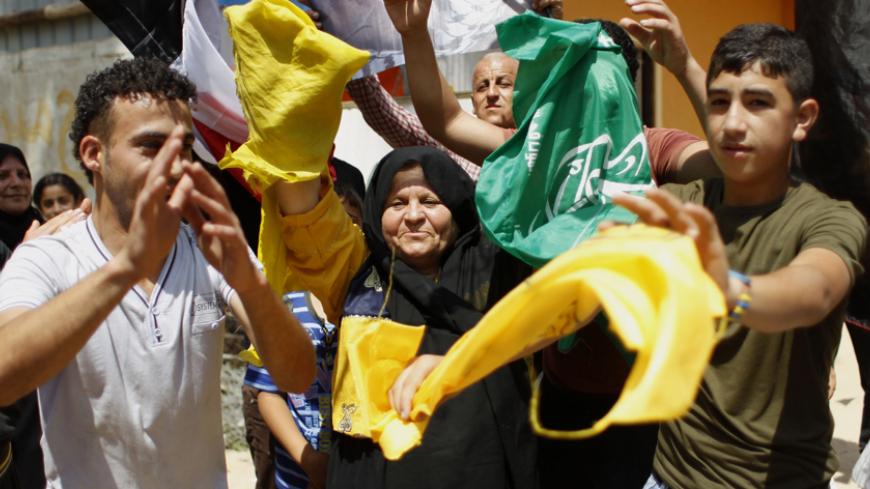 Palestinian protesters wave the flags of Palestinian political movements Fatah (yellow) and Hamas (green) as they chant slogans in support of the formation of a national unity government between the two factions during a rally in Khan Yunis, in the southern Gaza Strip, May 29, 2014. - SAID KHATIB/AFP/Getty Images

The last meeting of Fatah’s Revolutionary Council held in Ramallah on Oct. 18-19 and presided over by Palestinian President Mahmoud Abbas enjoyed exceptional importance, distinguishing it from previous meetings. This meeting discussed vital internal and external issues related to the relationship with Israel, the future of bilateral negotiations, the fate of reconciliation with Hamas and the consensus government, as well as the settlement of Fatah’s internal dispute with Mohammed Dahlan’s movement.

The Revolutionary Council is the highest parliamentary authority in Fatah, which includes the 81 members elected at the Sixth Fatah Conference in 2012.

The 14th session of the council delegated the Fatah Central Committee to make any political decisions, including ending any official relationship with Israel resulting from the Oslo Accord and its ensuing obligations. The council also stressed the link between the resumption of negotiations to halting settlement activity, recognizing the borders of the Palestinian state and preparing in advance to end the occupation.

Abdullah Abdullah, a member of the Fatah Revolutionary Council, told Al-Monitor that the decision "comes in the context of the evolution of political events on the basis of gain and loss. Fatah seriously broadened the horizons of negotiations while Israel turned them from a means into an end and a tool to gain time at the expense of Palestinians.”

He told Al-Monitor in a telephone interview, “Fatah now has absolute conviction that the Americans will not force Israel to abide by international law. This has led us to seek new authorities that can force the international community to assume its legal responsibilities toward Israel and exert pressure against it, although we already know that Washington can use its veto to protect Israel.”

Yet, influential sources in Fatah said in the media that the Revolutionary Council discussed the possibility of postponing the Palestinian petition to the UN Security Council at the request of US Secretary of State John Kerry, to allow him to launch a new initiative accepted by Palestinians and Israelis. The sources added that by the end of the year this matter would be settled, either through real negotiations different from previous negotiations or through a petition submitted to the UN Security Council.

Fatah Revolutionary Council meetings, which discussed reconciliation with Hamas and Fatah members, were divided between the two teams. The first recommended continuing to exert efforts toward a true reconciliation with Hamas within the scope of the concept of political partnership. The second team believed Hamas will not accept sharing its political decision-making and rule, and that therefore, all efforts to convince Hamas to participate politically will fail; rather it would be necessary to focus on developing a national position with the other factions, instead of wasting time with Hamas.

Abdullah said the “Fatah Revolutionary Council believes ending the division in the Palestinian scene is more important than reconciliation with Hamas, since it is a strategic decision and much more important than that of employees' salaries, on which Hamas is focusing in Gaza.”

He added, “Fatah wanted to reach a conviction that Hamas wants reconciliation out of national conviction and not due to its financial and regional crisis,” stressing that some of its practices and behavior are not consolidating positive efforts being undertaken to consecrate the reconciliation.

However, the Revolutionary Council decided to maintain the Committee of Five as a permanent committee headed by Azzam al-Ahmad, a member of the Fatah Central Committee, to finalize the reconciliation with Hamas, confirming that Gaza’s employee issue is not the responsibility of the National Authority nor the consensus government, but that Hamas is the only body authorized to resolve this matter arising from the rift dating back to 2007.

Hamas leader Yahya Moussa told Al-Monitor, “Hamas refuses to be led into reconciliation under the umbrella of the Oslo Accord, the Quartet and surrender to Israel. Hamas must search for new allies in the Palestinian scene under the banner of a liberation project based on a sound foundation and a vision that combines the various parties.”

He added, “Regardless of the Revolutionary Council decisions, it is clear that we are facing two visions within Fatah: The first continuously demands reconciliation and falls within the scope of Abu Mazen’s project, while the second refuses reconciliation with Hamas, which is even worse. Hamas does not find itself bound to have any reconciliation with any of the two teams.”

On a different note, the Fatah Revolutionary Council couldn’t hold its last meeting without addressing the constantly recurring issue of Dahlan. The latter was dismissed from Fatah by the Central Committee, along with a number of his colleagues.

The last meeting of the Revolutionary Council witnessed a sharp debate between supporters of Abbas and Dahlan, against the backdrop of what was recently described as a neglect for the Gaza Strip by the Palestinian Authority (PA).

Osama al-Farra, a member of the Fatah Revolutionary Council, listed the aspects of neglect of Gaza by the PA and Fatah leadership on his Facebook page Oct. 23 after his participation in the Revolutionary Council meetings. These included describing anyone who objects to Fatah leadership decisions as committing a violation, as well as suspending bonuses due to civilian and military personnel, dealing with Gaza as an annexed territory, considering Gaza’s leadership as incompetent, and allocating a budget for Gaza that does not exceed 10% of Fatah's monthly budget.

Members who participated in the Revolutionary Council meeting and asked to remain anonymous told Al-Monitor that a dispute arose over the confirmation or denial of the dismissal of a number of Fatah leaders in Gaza on charges of connection with Dahlan. The dispute reached a peak between Fatah Central Committee members Jamal Muheisen and Tawfiq al-Tirawi.

Fatah sources said that Abbas bashed Dahlan and his team, saying this matter is over and should not be discussed again.

Abdullah Abdullah told Al-Monitor, “Fatah leadership took its final and irreversible decision regarding Dahlan. He left the movement and will not be welcomed back. Fatah will not tolerate any internal violation related to Dahlan.”

Finally, the Revolutionary Council meetings did not solve the discussed issues, but on the contrary, the internal and external situations of Fatah are likely to get even worse, whether in terms of the frozen relationship with Israel, the fragile reconciliation with Hamas or the growing dispute with Dahlan.