Fatah leader Mahmoud Abbas dismissed six leaders of the movement for their alleged allegiance to his rival Mohammed Dahlan. 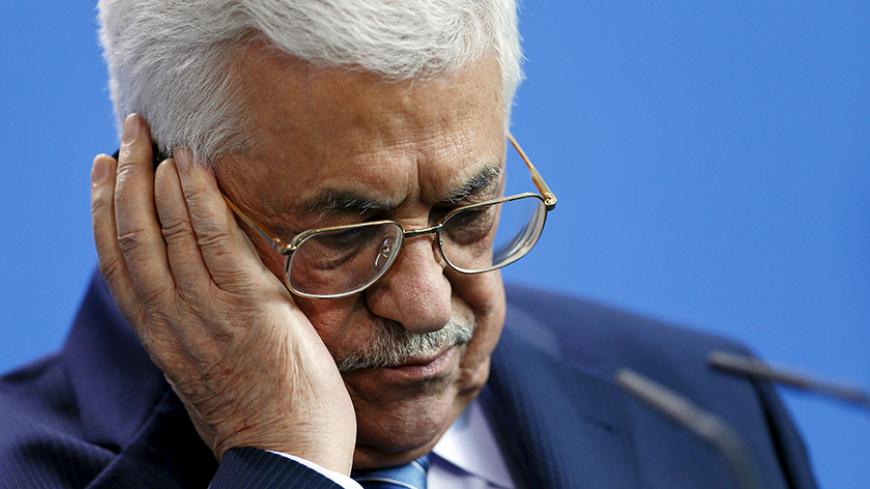 GAZA CITY, Gaza Strip — Fatah's internal disputes are back in the spotlight after a surprising revelation at a movement gathering in Nablus on Aug. 5. Jamal Muheisen, a Central Committee member, announced at the meeting that Fatah Chairman Mahmoud Abbas had signed off on a decision to dismiss four Fatah leaders on the grounds of having “other allegiances,” a not-so-veiled reference to Abbas rival and ousted Fatah member Mohammed Dahlan.

The decision was confirmed by a leaked document issued by Palestinian General Intelligence and addressed to Abbas in his capacity as leader of the Palestinian Authority (PA). Dated Aug. 7 and published by several Palestinian media outlets, including Pal Times, the document notes that six leaders were to be dismissed, not four as Muheisen had announced. Those named were Najat Abu Bakr, Naima Sheikh Ali, Adli Sadek and Tawfiq Abu Khoussa, while the identities of the other two were not disclosed.

A member of Fatah’s Revolutionary Council who attended the Aug. 5 meeting told Al-Monitor on condition of anonymity, “During the meeting held to discuss Fatah’s internal affairs before the local elections in October, we were asked [by Muheisen] to suggest names from inside and outside Fatah to run as candidates in the elections for the governorate of Nablus. One of the attendees suggested putting forward the name of a figure who is socially acceptable in order to guarantee our win. He proposed MP Abu Bakr, as he believed she is best suited for the position, since she meets all the requirements.”

The official continued, “Muheisen was angered and said that the president had approved the decision to dismiss Abu Bakr along with Sheikh Ali, Sadek and Abu Khoussa, because they have other allegiances and maintain a relationship with dismissed leader Mohammed Dahlan.”

The official said that figures close to Abbas revealed during the meeting that the decision to expel Abu Bakr came after she held a sit-in inside the Palestinian Legislative Council on Feb. 25 following an attempt by security forces to arrest her in conjunction with a lawsuit filed by the minister of local government, Hussein al-Araj, whom she had accused of embezzling public funds. In addition, she had met with Dahlan in Egypt earlier in February.

Those at the meeting were surprised at the timing of Muheisen’s announcement. Indeed, the bulk of analysis surrounding the dismissals has focused on the timing, because Fatah is preparing for local elections slated for October. Most expect that the movement will pay at the ballot box for its internal disputes.

Abu Bakr, who learned about her ejection from people who attended the meeting, told Al-Monitor that she has not been officially informed of the decision and that she will continue with her work in Fatah, noting that the movement is not a private company from which to be dismissed. Of her relationship with Dahlan, Abu Bakr said, “If I am to be dismissed for this reason, then all members of the Revolutionary Council and the Central Committee and every person in the movement who has ever met or will meet with Dahlan should be dismissed as well.”

Fatah’s Central Committee had dismissed Dahlan at a Ramallah meeting on June 12, 2011, for “criminal, financial and other issues.” His case was referred to the Palestinian judiciary, after months of infighting between Abbas and Dahlan at the end of 2010 over influence and command of the movement.

Sheikh Ali told Al-Monitor, “Some consultations are taking place to address the [decision], and we hope to see unity within Fatah again, especially since the local elections are close, and the movement should be united before entering the elections.”

On Aug. 7, the newspaper al-Resalah reported Sadeq as saying, “We will not recognize the decision to dismiss any member of the movement on the grounds of having other allegiances. We are not guests at Muheisen’s. We are not dependent on him or any other person in the movement.”

He further asserted, “The one [Abbas] who issued the dismissal decision believes he is popular and patriotic, but he is merely a passing person in the movement. He must believe we live in his own hotel to [try to] kick us out. Those running the Fatah movement are drifting. The decisions they are taking are worsening the crisis plaguing the Palestinian cause.”

This recent batch of dismissals has stirred a dispute within Fatah, but they are not the first of their kind. In June 2014 Majed Abu Shamala, Nasser Juma, Abdul-Hamid al-Masri, Sufian Abu Zaida and Rashid Abu Shabak were also kicked out of the movement.

Masri, dismissed on the ground of alleged other allegiances, that is, to Dahlan, said, “Dismissing leaders or members from the movement without legitimate reasons is provocative and illustrates the totalitarian mentality that controls the movement.”

Masri told Al-Monitor that those ejected for having relations with the reformist current, headed by Dahlan, will earn points among Fatah supporters, because they are aware that those leaders were within their rights and calling for reform within a movement whose leaders are headed down the wrong path.

Masri warned that Fatah will be further weakened as a result of the recent decision. He hopes such disputes will soon end and Fatah unites to maintain its position at the forefront of the Palestinian national movement.

Fayez Abu Shammala, a political analyst and member of the Palestinian National Council, believes that certain parties, which he did not name, seek to weaken Fatah in order to influence Palestinian politics. He believes that talks of attempts to unify the movement are illusory because in reality, Fatah is divided between a current affiliated with Abbas and another affiliated with Dahlan.