Dismissed Fatah leaders look to reform movement from outside

A group of Fatah leaders who were dismissed by President Mahmoud Abbas for having allegiances to Mohammed Dahlan called for the formation of a committee of Fatah elders to end the division plaguing the movement. 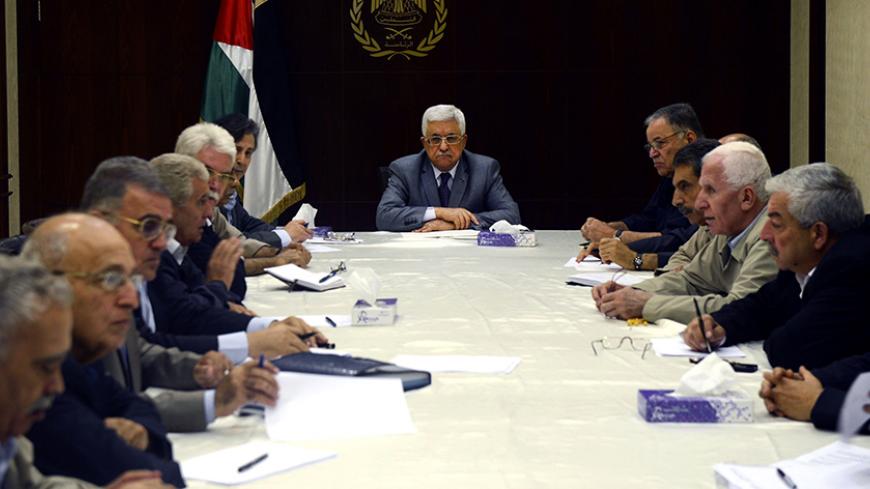 GAZA CITY, Gaza Strip — A number of Fatah leaders, namely Jamal al-Tirawi and Najat Abu Bakr, who were dismissed from the movement at the end of October on the grounds of having other allegiances, have called for the formation of a committee of Fatah elders to try to re-boost the movement, reunite it and thwart any exclusionary decisions by the movement’s seventh conference scheduled for Nov. 29.

This call comes in tandem with Fatah’s official announcement of the seventh conference and its cutting of salaries of the staff supporting dismissed leader Mohammed Dahlan, as well as the outbreak of clashes between the security forces and some armed members in camps in the West Bank in protest of the movement’s dismissal decision.

Tirawi told Al-Monitor that the calls to form said committee come in a bid to save the movement, in light of the accumulated internal crises and concerns that the conference would pave the way for more dismissals and further salary cuts.

He said that the idea to form a committee of elders was the result of discussions held with many of the leaders and cadres of the movement, who refuse this exclusivity and exclusion policy carried out by Fatah’s senior leaders — Mahmoud Abbas and his peers — hoping that these calls would not fall on deaf ears.

Tirawi said that the movement includes many historic, intellectual and competent leaders who could form the committee, refusing to give specific names. He believes that these figures are consensual and approved by everyone in the movement.

In the same context, Naeema al-Sheikh, a member of parliament who was dismissed from Fatah, told Al-Monitor, “Since the very beginning of the dispute in 2010 between Abbas and other leaders within the movement [Dahlan and his supporters], we have been calling for a committee of elders to save and reunite the movement.”

She explained that said committee ought to be formed by unbiased Fatah figures who would be able to discuss and handle matters of contention between the leaders and the cadres of the movement to reach a solution satisfactory to all parties. This committee would strive to mend fences within the movement, unlike Fatah’s internal courts, whose decisions are controlled by Abbas.

Sheikh said that the dismissed members will continue their demands and steps to form this committee to serve as an impartial fair body, capable of reinstating the dismissed leaders and cadres and ending this monopoly of decision.

The sacked leaders do not recognize the Palestinian courts’ decisions that were issued following their dismissal, the latest of which was the Constitutional Court decision Nov. 6 to grant Abbas powers to lift parliamentary immunity of Dahlan. They considered the courts to be a tool in the Palestinian president’s hands.

For his part, Ahmad Abdul Rahman, a member of Fatah’s Consultative Committee, told Al-Monitor, “Those who hold different allegiances do not need a committee of elders or wise men; they need to return to their senses and place Fatah at the top of their priorities, holding up their independence away from anyone’s tutelage and without any affiliation to any other party.”

“When they abide by the movement’s decisions and apologize for what they have done during the last period — be it their allegiance to other Arab parties or libeling the Fatah leadership — only then can they return to the movement without the need of a committee of elders,” Rahman said.

He added, “This is of course with the exception of Dahlan, who is facing financial and criminal cases before courts and cannot return to the movement.”

Rahman advised Dahlan and his political peers to retire from politics for many years, given how much they faulted their movement and accepted becoming tools in the hands of some countries — i.e., the Arab Quartet.

Of note, the Arab Quartet (Saudi Arabia, the United Arab Emirates, Egypt and Jordan) launched talks in August in a bid to achieve reconciliation between Abbas and Dahlan after the escalation of disputes following the latter’s dismissal in June 2011 by Fatah’s Central Committee. However, the Arab efforts pushing toward returning Dahlan to the heart of Fatah were to no avail, given Abbas’ intransigent refusal of such a reconciliation, which he views as paving the way for Dahlan to become his successor as president.

“Not one of these sacked leaders will return to the movement under the leverage of one of these countries, as we will not allow them to interfere in the matters of Fatah or the Palestinians,” Rahman said.

Political analyst Hani Habib considered the calls to form a committee of elders inside Fatah to be too late, as the preparations for the movement's seventh conference are wrapped up. He believes that said conference would also be another explosion of anger within the movement, given the exclusion of a number of sacked leaders and cadres who had participated in the sixth conference in August 2009.

“The deep divisions plaguing Fatah would not be mended by any committee of elders, as the movement is divided between two camps, pro-Abbas and pro-Dahlan,” he told Al-Monitor.

Political analyst Mohamed Hawash told Al-Monitor that it is unlikely for the formation of any committee to change the reality of Fatah, which is now at its nadir, noting that it is normal for all movements and organizations to hit rock bottom but that does not mean their demise.

“Fatah has experienced many rifts in the past within its ranks but this did not affect its trajectory,” Hawash said.

He added, “Fatah has a Consultative Committee that includes most of the historic leaders [founding leaders such as Ahmed Qurei and Abdullah al-Ifranji among others], who did not have any luck in the latest elections of the sixth conference, and who nonetheless have considerable political and regulatory savvy.”

Hawash said that some of them could play a role in solving the differences plaguing the movement, which could be further impetus toward containing internal differences without the need to form any committee.

He noted that the demands and calls on the part of sacked members to form said committee are mere attempts, especially on the part of Dahlan, to return to the movement and be part of any new formation resulting from the seventh conference. He stressed that the fate of Fatah is not associated to these dismissed members.

The recently escalated demands to form a committee of elders appear to be an attempt by sacked members to leverage the movement’s leadership to take them back in and to stop further dismissals of cadres associated with Dahlan.