A new current has emerged within the Fatah movement with the objective of bringing about reforms, which raises questions on whether or not its founders plan to defect from Fatah’s main branch. 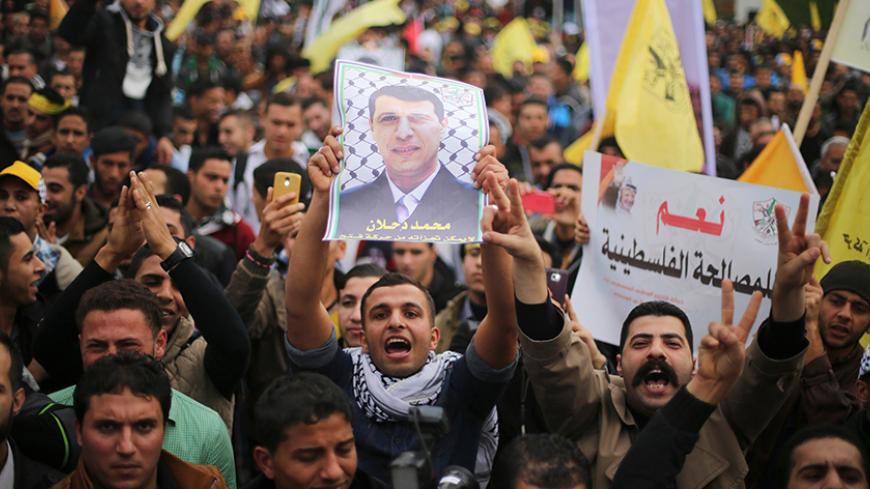 GAZA CITY, Gaza Strip — A new current has been active within the Fatah movement. Its founders have named it the “Democratic Reformist Current,” which consists of a large number of leaders who were dismissed by the movement’s leader Mahmoud Abbas, because they refused its policies, as well as other active leaders.

The conflict within the movement started to fully surface after former leader Mohammed Dahlan was dismissed from Fatah’s Central Committee on corruption charges and ended all ties with the movement on June 12, 2011. Yet in 2015, the Corruption Crimes Court in Ramallah rejected the accusations directed against him and closed the case. Dahlan has been residing in the United Arab Emirates ever since.

Dahlan’s dismissal was followed by the dismissal of many other leaders and cadres supporting him, which resulted in the movement splitting into two currents: the pro-Abbas current and the opposing reformist current led by Dahlan.

Abdul Hamid al-Masri, a former member of Fatah's Revolutionary Council, who was dismissed from the council two years ago, and who is a founder of the reformist current from the Gaza Strip, told Al-Monitor that the current is a part of the Fatah movement and that they are seeking reforms within Fatah through this current.

He said, “We want to bring about reforms in terms of all of the defects caused to the movement’s internal regulations, the violations and the monopoly of leaders over the movement’s decision-making. These include the dismissal of Dahlan and fellow members of the Revolutionary Council, including myself. We do not perceive the dismissal as legal, because it did not go in line with the movement's internal regulations, such as a two-thirds vote of the Revolutionary Council’s members that is required for the members’ dismissal. For that reason, many Fatah members and leaders have rejected the dismissal.”

The current, whose popular base within Fatah goes beyond the West Bank and the Gaza Strip, manages many charities that receive financial support and aid, according to Masri.

He added, “There are members of the current who are still exercising their role within the formal structure of the Fatah movement at home and abroad; they are cadres and officials of the movement. Others are assuming their role through institutions that we are running. While each may be running an institution, the external funds received through these institutions are for all the Palestinian people, not for the reformist current.”

Masri believes that the changes that will be brought about and the elimination of corruption within Fatah will inevitably end its problems.

He said, “I think that Abbas and those members opposing the return of the reformist current’s members to Fatah — who rejected the policy of marginalization, isolation, persecution and oppression that they have been subjected to — are few. In contrast, those voices calling for the members to return to the movement and assume their roles are the majority. Abbas is not the inevitable fate of Palestine or the Fatah movement. He was preceded by Yasser Arafat, who died, but Fatah survived. Abbas will leave and the movement will survive.”

Al-Monitor contacted pro-Abbas Fatah leaders in Gaza, but they refused to comment on the matter.

Since its inception on Jan. 1, 1965, Fatah has witnessed a limited number of internal political defections starting with the defection of Sabri al-Banna (aka Abu Nidal), head of Fatah’s office in Baghdad. Banna established the splinter group Fatah - The Revolutionary Council in 1974, in protest against what he called peaceful solutions to the Palestinian cause, which he described as capitulatory solutions.

Then a number of Fatah leaders in the Lebanese Taalabaya and Taanayel areas defected in 1983 and formed the corrective movement, which later became known as Fatah al-Intifada that was supported by the regime of late Syrian President Hafez al-Assad.

Despite the limited defections and subsequent formation of small factions, which their founders view as natural extensions of Fatah, the main branch soon restored its unity.

Yet are the founders of the reformist current planning to establish a new independent political body that represents them?

Political analyst Akram Atallah told Al-Monitor, “Although roughly four years have gone by since Dahlan and his supporters were dismissed from the movement, it is still unknown whether or not Dahlan and those supporting him will form a new party or return to the movement, based on reconciliation between him and Abbas."

He added, “A feeling that work is underway toward the formation of a parallel party prevails sometimes. At other times, there is a feeling that work is underway to go back to the movement. This time, the matter is different from the previous defections, or even from the other Palestinian factions, like the defection of the Popular Front for the Liberation of Palestine that split up into two parties in 1968. So far, it is still unclear where this issue is heading.”

Atallah believes that Fatah’s history shows that top Fatah leaders defected and formed political currents that soon withdrew from the political scene while the movement remained unified. He attributed it to several reasons, saying, “First, their dismissal and subsequent defection resulted from the use of weapons in the Palestinian refugee camps in Lebanon, which is unacceptable, making the dismissal fair and reasonable. Second, Arafat was the one leading the movement and he preserved its strength, and third, they lacked financial foundations enabling them to build a large and powerful party.”

According to Atallah, these reasons no longer exist, which means that the factors behind the failure of a parallel current no longer exist. Arafat, who was a symbol, no longer exists. Dahlan has the money to build a party, and the way he was dismissed from Fatah prompted other members to support him as they viewed that he was unjustly dismissed.

Atallah pointed out that Fatah’s unity is at risk after the emergence of this current, particularly since the dispute was aggravated between Dahlan's and Abbas' currents. He said, “This matter will affect the unity of the Fatah movement. The internal dispute is tense, and it is clear that it has aggravated following Dahlan’s dismissal. Two poles, two currents and two delegations have started to be seen in pleasant and unpleasant public occasions lately.”

Previous defections have failed to result in the establishment of new currents, due to the lack of an environment favorable for their survival. The circumstances, however, have changed at present, which strengthens the fears that the new reformist current will turn into a splinter party.