The upcoming Palestinian elections are expected to stir a new confrontation between Fatah and Mohammed Dahlan’s movement should the reconciliation efforts exerted by some Arab countries fail to unify the Fatah movement. 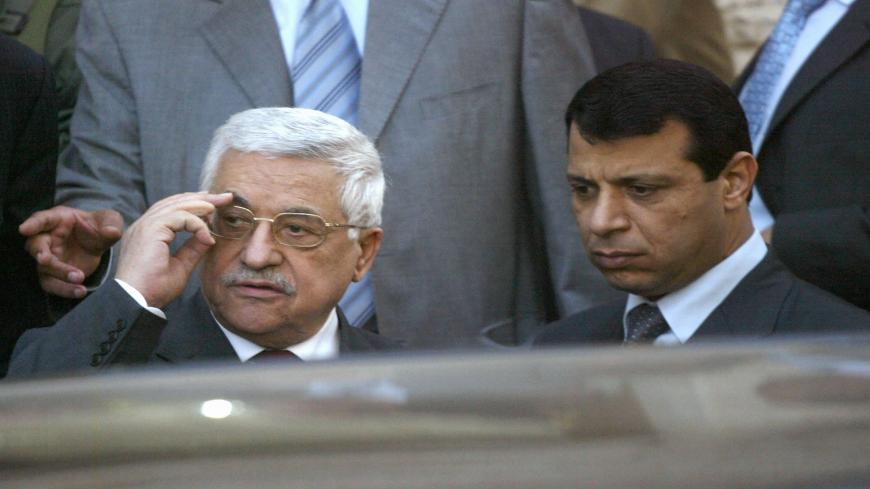 A day after the presidential decree was issued, Sufian Abu Zaida, a leader in Dahlan’s Democratic Reformist Current, expressed his current’s intent to participate, alongside the Fatah movement, in the elections with a unified list.

In a Facebook post Jan. 16, Abu Zaida said that should a unified list for the Fatah movement prove impossible, the Democratic Reformist Current will run in the legislative elections with an independent list of leaders and cadres of the current, adding that candidacy will be open for national social figures.

Abu Zaida’s call was rejected by the Fatah movement, which reiterated its commitment to the decisions of its leadership, referring to the movement’s decision to dismiss from its ranks members of the Democratic Reformist Current.

Majed al-Fityani, secretary of Fatah's Revolutionary Council, told Al-Monitor that the decision to participate in the elections will be approved by the movement’s leadership in the coming days. “An agreement will be reached to shape the alliances that the movement may form to run in the elections,” Fityani said. “The so-called Democratic Reformist Current has nothing to do with the Fatah movement. Its members decided to be outside the Fatah framework. They are the cause of all the internal ills in Fatah, which is not bound by any talks or dialogue with anyone outside the movement in any way.”

Regarding the Democratic Reformist Current’s intention to run in elections with an independent list, Fityani said, “These are independent Palestinian elections. No one can take away the democratic right of a party that is subject to the law to run for office. But the [elections] law prohibits anyone charged with offense or misdemeanor or slapped with a sentence to be a candidate in elections.”

Dahlan, who has been in exile in the United Arab Emirates (UAE) since 2011, was investigated by the Palestinian Authority (PA) and charged for several offenses, including alleged corruption. In 2016, he was convicted in absentia for embezzling $16 million and sentenced to three years in prison.

Fatah believes it can block the way for Dahlan and some of his current’s leaders by preventing them from running in either the presidential or legislative elections, based on the Palestinian Elections Law of 2007, and the amendments thereto in accordance with the decree law issued by Abbas on Jan. 11.

Article 39 (5) of the law was amended to stipulate that a candidate for the presidency must attach to the candidacy application a non-conviction certificate from the court. Thus Dahlan, who faces charges, cannot run in the elections.

Article 68 of the law prohibits any electoral list or candidate who participates in the elections from obtaining funds for the election campaign from any foreign or external source other than Palestinian sources, directly or indirectly. This constitutes another roadblock to the Democratic Reformist Current that enjoys great financial support from the UAE.

Abdel Hamid al-Masri, a leader in the Democratic Reformist Current, confirmed his movement’s intention to run in the legislative and presidential elections and the National Council elections.

On the judicial decision against Dahlan that may hinder his candidacy, Masri told Al-Monitor, “For us, Dahlan is not convicted in any case and we would yield to any ruling issued by a fair justice and an independent judiciary. But if the law is politicized, we will reach out to all parties that sponsor the elections to solve this issue.”

Dahlan’s current is counting on the elections to return to the Palestinian political arena, especially since the current’s leaders have either been dismissed from the Fatah movement, or lost their immunity or political position after the dissolution of the Palestinian Legislative Council. If these leaders are prevented from participating in the elections according to the law, the movement will tap into its strong relations with some Arab countries, such as Egypt, Jordan and the UAE, to exert pressure on Abbas to overcome the dispute with Dahlan and allow his current to run in the elections under a unified list with Fatah.

On Jan. 17, head of Egyptian intelligence Abbas Kamel and his Jordanian counterpart, Ahmed Hosni, paid a surprise visit to Ramallah, where they met with Abbas. The meeting was also attended by Palestinian intelligence chief Majid Faraj.

Israel’s public channel Kan 11 reported Jan. 19 that during the meeting Jordan and Egypt called on Abbas to unify Fatah's ranks before the legislative elections and to run in the elections with a unified and undivided list to confront Hamas. The media outlet said Jordan and Egypt did not directly demand to include Dahlan on the list of the Fatah movement.

Masri said that failing to unify Fatah’s ranks and running the elections with multiple lists will weaken the movement against Hamas and reduce its chances of winning. “We called for a unified Fatah electoral list to keep it from losing to Hamas,” he added.

Asked about whether there was a decision in the Democratic Reformist Current to nominate Dahlan for the position of president, Masri noted, “There is no decision yet to do so. The movement will make its decision democratically within its framework and institutions.” However, he did not rule out the possibility of the movement supporting a national figure outside the movement.

The Democratic Reformist Current poses a new challenge to Fatah, in addition to the challenge already posed by Hamas, which raises many scenarios for the relationship between both Fatah and Dahlan’s current.

Writer and political analyst Jihad Harb told Al-Monitor, “The first scenario is the emergence of two electoral lists and perhaps more, within the Fatah movement. The other scenario is to accelerate the reconciliation within the Fatah movement through the mediation of the Egyptian and Jordanian security services, which could pave the way for Fatah to run in the elections with one list.”

Harb explained, “Dahlan will not be able to run in the presidential and legislative elections because of a court ruling against him. But his movement may support a candidate for the presidential elections other than Fatah’s official candidate. The movement may run in the legislative elections with a list of figures against whom no judicial decision has been issued in the Palestinian courts.”