The dispute over the immunity of Fatah-affiliated MP Mohamed Dahlan has revealed rifts between members of the Fatah Movement, writes Naela Khalil. 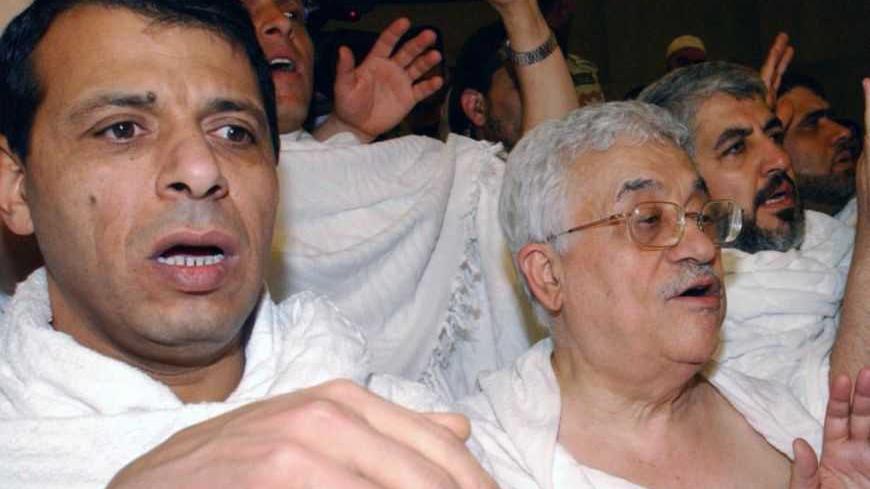 The issue of Fatah-affiliated MP Mohammed Dahlan has once again topped Palestinian news, as proceedings at the Constitutional Court are to be held on March 28, to consider the appeal presented by Dahlan against President Mahmoud Abbas’s decision to strip him of immunity.

The different views on “Dahlan’s immunity” reflect the deep conflict within Fatah between those who support Dahlan and those who oppose him. Meanwhile, some figures in Fatah say that efforts are being made to persuade Abbas to withdraw the presidential decree to lift immunity before the court’s session.

“The president does not intend to withdraw the decree, which was issued in light of a lawsuit against MP Dahlan before the public prosecution, and immunity in this case could hamper investigations,” said Hassan Alaoura, the legal adviser to the president.

For his part, Sufian Zaida, a member of the Fatah Revolutionary Council, said, “After a year and half, the Palestinian Authority has failed to prove any charges against Dahlan.”

The Abbas-Dahlan crisis — as dubbed by the media — erupted about two years ago, when the relationship between MP Dahlan, who is also a leader in the Fatah movement, and Abbas took a turn for the worse.

Fatah’s Central Committee, headed by Abbas, decided to sack Dahlan and end all his official ties with the movement in June 2011, amid a flurry of financial and administrative corruption charges. Moreover, the Military Intelligence Service stormed Dahlan’s house in Ramallah and arrested one of his bodyguards. The presidential decree to lift Dahlan’s immunity came to add another chapter to the story before the Palestinian judiciary, as Dahlan has appealed against the president’s decision.

The legal advisor refused to give further details about the nature of this case to the Al-Monitor correspondent, saying, “When the president issued this decree; he was well aware that such a decision would be subject to the control of the supreme and constitutional courts and he welcomes any decision on the part of the judiciary.”

Abu Zaida, however, disputed these statements. “All the pretexts and charges against Dahlan have been proven unfounded a year and a half since the issue reared its head. When the crisis first erupted, they claimed that Dahlan was plotting a coup. So the pertinent question is this: Why have the Palestinian security services failed to find any weapon or evidence to prove this accusation? They also accused Dahlan of murder and financial corruption, but data on the ground show that no case has been brought against him in Palestinian courts, including anti-corruption courts, which undermines all charges against him,” he said.

Abu Zaida believes that two scenarios are plausible within the coming days. “Either the president will pull his decree and inform the court of this decision, or the court will not settle the issue, on the basis that this case does not fall under its jurisdiction, which would be a true calamity,” said Abu Zaida.

He added that “there are no self-respecting adjudicators who would possibly accept the second option based on the law.” Alaoura, on the other hand, stressed that “President Abbas will not withdraw the decree to lift immunity.”

Nevertheless, Abu Zaida said, “The pending case before the Palestinian Constitutional Court is not personal or limited to Dahlan alone. This case affects the core of the relationship between the executive and legislative powers, and questions their independence. Moreover, no legal expert or member of the legislative council acknowledges that the president has the power to lift the immunity of any of the Legislative Council’s members.”

He added that the “president has made unjust decisions against Dahlan and should renege on them, without even waiting for the Constitutional Court to accept the appeal filed by Dahlan.”

For his part, Alaoura said, “Basic Law has granted the president powers to act on behalf of the Legislative Council. Issuing such a decree comes pursuant to the jurisprudence procedures.”

On the other hand, Deputy Chairman of the Legislative Council Hassan Khreisheh disputed the validity of the presidential decree. “The law grants the president powers to pass legislation pursuant to presidential decrees, but it did not grant him the right to lift the immunity of any MP. Pursuant to the law, the Legislative Council alone enjoys the right to lift immunity,” he said.

He added that “according to the law, there are procedures that must be followed in order to lift immunity. The general prosecutor should submit a letter to this effect to the presidency of the Legislative Council, which in turn refers it to the Legal Committee. After legal examination, two thirds of the Legislative Council members must vote in favor of the decision for it to be approved and enforced.”

Alaoura cited some legal views, saying that “no MP in the current Legislative Council enjoys immunity, as the council is disabled. MPs who break any law do not have any diplomatic immunity.” This point was at the basis of the Public Prosecution’s pleading at the court session that was held in March 5.

This point has provoked controversy as to the fact that MPs do not enjoy immunity and continue to receive their salaries on a regular basis, weighing heavily on the government deficit.  Palestinian MPs continue to receive their salaries amounting to $5,000 per month, which include their $3,000 basic salary in addition to their administrative expenses.

“Dahlan continues to enjoy immunity, given that he is a member of the Legislative Council elected by the Khan Younis governorate,” Khreisheh said.

He added that “the Constitutional Court is not the competent authority to settle this matter. Nevertheless, in light of the deliberate disruption of the Legislative Council, the presidency is seeking to lift Dahlan’s immunity, through the court.”

While Dahlan’s crisis reflects the conflict within Fatah, Abu Zaid said that “those who believe that Dahlan’ case has become of the past and does not have great significance are delusional.”

Alaoura, on the other hand, emphasized that “the immunity issue underscored the jurisprudence in Fatah,” denying the existence of any conflict within Fatah.

The most surprising thing, however, is although Dahlan’s case has attracted significant attention, Dahlan himself is not in the Palestinian territories.

“He is currently in the UAE and could not come due to personal reasons,” his lawyer Daoud Derawi said.

In the same context, Alaoura said that “Dahlan is not banned from entering the Palestinian territories. If I was in his shoes, I would have cooperated with the public prosecution to reveal the truth without letting any other parties interfere, because Palestinian law protects everyone.”