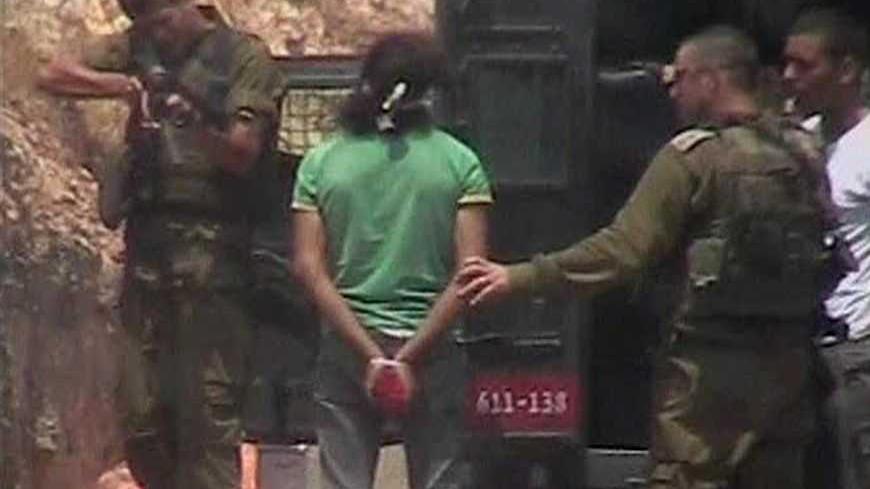 An Israeli soldier fires towards the leg of a Palestinian detained during a protest against the controversial Israeli barrier in the West Bank village of Nilin, in this low-resolution frame grab from a video released July 20, 2008, by Israeli human rights group B'Tselem.

It may seem surprising to some that B'Tselem — the Israeli Information Center for Human Rights in the Occupied Territories — documents and exposes violations carried out by its country’s army against Palestinians. However, these doubts quickly disappear when you witness Palestinian victims dialing the numbers of B'Tselem personnel for emergency help when they are exposed to settler attacks and army abuses.

B’Tselem’s work in documenting and exposing human rights violations in the occupied territories has been so extensive that mere mention of B'Tselem vexes Israeli settlers and soldiers alike. Its consistent success in bringing hundreds of cases against settlers and soldiers to the Supreme Court has earned it Israeli ire and Palestinian praise.

B'Tselem research manager Karim Jibran said, “Yes, it is an Israeli organization. But after 24 years of documenting and exposing the practices of the occupation it has earned our respect and widespread approval across the Palestinian occupied territories because of our penchant for human rights.”

According to B'Tselem, it was founded by a group of prominent academics, attorneys, journalists and Knesset members. It endeavors to document and educate the Israeli public and policymakers about human rights violations in the occupied territories, combat the phenomenon of denial prevalent among the Israeli public, and uphold the principles of international law. It is funded by contributions from foundations in Europe and the United States of America that support human rights activity worldwide, and by private individuals in Israel and America.

Over the past two decades B'Tselem has collided with the three centers of power in the state of Israel: the military establishment, represented by the Israeli occupying army; the settlement community; and the legal establishment, represented by the public prosecutors and the Supreme Court. The latter is perhaps the most vulnerable of the three, for Israel has always pointed to this institution to prove to the international community that it is a democratic state governed by law. Thus with each lawsuit raised against soldiers and settlers accused of violating human rights and international law, of which there have been hundreds, this Israeli organization threatens to mar its country’s legal and human rights reputation.

According to Jibran, over the past ten years B’Tselem has lodged 304 complaints regarding the murder of Palestinians. Israeli authorities have opened investigations into 73 of these cases, and have only found nine soldiers guilty. As for the rest: 23 cases were closed without taking any measures against the accused soldiers; 27 cases are pending; and 168 complaints went unanswered, with the Israeli authorities never disclosing whether they would open investigations or not.

B’Tselem has lodged ​​241 complaints of incidences of excessive violence exercised by soldiers against Palestinian civilians. Of these, 134 were closed without any action being taken, and only seven soldiers have been convicted.

These results may seem modest compared to the great efforts undertaken by B'Tselem in the Palestinian territories. However those familiar with the issue will tell you that any Palestinian human rights organization would stand effectively no chance at eliciting a guilty verdict for Israeli soldiers or settlers in an Israeli court. Filing the case and collecting all of the evidence and testimonies in accordance with the law is far from easy, but far harder is overcoming the accusations of bias with which the Israeli prosecution will always attempt to smear any Palestinian human rights organization, irrespective its professionalism and integrity throughout legal procedures.

Jibran added, “The Israeli investigation process does not seek to achieve justice.”

B'Tselem employs 11 Palestinian researchers, with nine in the West Bank and two in the Gaza Strip. In addition to them, there are dozens of volunteers who help the center expose Israeli violations.

The researchers deal with the issues that form the basis of the Palestinian-Israeli conflict, including: murder, settlement construction, water, administrative detention, property violations, violations against children and minors, restrictions on freedom of movement, the separation barrier, and executions. This work also exposes the researchers themselves to targeted harassment and rights violations.

Field researcher Atef Abu Rub said, “We are constantly the targets of harassment from soldiers and settlers while out in the field. They know that the information and reports gathered by B'Tselem reach the Israeli public and the world at large, which humiliates them.”

He continued saying, “On one occasion, I was visiting the Jordan Valley where many people suffer from rampant violations at the hands of the Israeli army, which hopes to drive them away. A soldier stopped me at the military checkpoint as usual, and when he learned that I was from B'Tselem, he told the rest of the soldiers angrily, ‘This one works against the Israeli army!’ Then they all went about dismantling my car giving no explanation as to why. That’s why I often prefer to travel with a journalist syndicate ID to avoid harassment.”

Abu Rub is a veteran Palestinian journalist who has worked with B'Tselem for 11 years. He resides in the city of Jenin, a Palestinian city that was hit particularly hard in the wake of the Al-Aqsa Intifada, and he said, “Why do I work with B'Tselem? I’m used to hearing this question, and my answer is always, ‘Because I want the voice of the victims of the Israeli occupation to be heard.’ It is no secret that the Palestinian narrative is unheard and ineffective, for various reasons. However B'tselem has a significant impact on the Israeli public and in international forums, in which its documents are viewed as the authoritative reference material, whereas I am one Palestinian worker who takes depositions and testimonies from victims and records video. The Israeli podium has greater reach; that’s the way it is.”

Working for B'Tselem has its price. Dismantling cars and preventing researchers access to victims is not the only form of persecution to which the field workers are exposed. In 2004 and 2005, Israeli occupation authorities denied Abu Rub passage out of the occupied territories despite his having had permits to enter Israel for visitation and medical treatment.

He commented, “We know that we are a nuisance to the Israeli occupation authorities, and I hope that someday there will be a Palestinian organization with the same levels objectivity and influence.”

Documenting abuses is no longer limited to field researchers and volunteers. Victims of violations carried out by settlers and soldiers alike are now documenting these abuses on video after B'Tselem distributed about 200 video cameras to citizens subjected to ongoing settler aggression in confrontational areas, such as in Bil'in, Ni'lin, Burin, al-Masara, the old city of Hebron, and dozens of other places.

Rana Tabrah, who hails from the village of Burin in southern Nablus, said , “Not a week goes by without settlers from Yitzhar attacking my house, which is less than 400 meters away from their settlement that was built on the land of a village they seized. When they attack us with petrol bombs and stones I gather the eight children into the safest room, where there are no windows and the door is made of iron and seals fast. Meanwhile, my husband or his sister will film the assault and flee quickly if the situation becomes dangerous. We document the attack as we were taught by a researcher from B'Tselem, and then we contact them to come here.”

B'Tselem cameras can be found in the hands of Palestinian citizens in all of the hot spots in the West Bank. They submit it to the courts as incriminating evidence, thus forcing the settlers to wear masks during their attacks for fear of legal prosecution.