Supporters of the exiled Fatah leader Mohammed Dahlan appear to be taking the brunt of the Fatah leadership's anger, with rounds of political arrests. 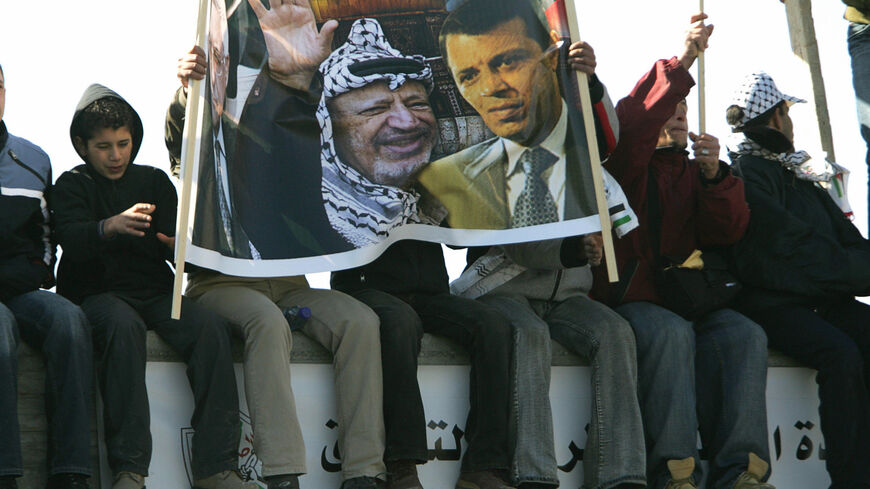 Palestinians hold a banner showing Palestinian leader Yasser Arafat (L) and Fatah legislator Mohammed Dahlan during a rally in the West Bank city of Ramallah, Jan. 11, 2007, to mark the 42nd anniversary of the Fatah movement. Arafat had died a little over two years before. - PEDRO UGARTE/AFP via Getty Images

RAMALLAH, West Bank — Palestinian security services in the West Bank have been clamping down in recent days on supporters of the so-called Democratic Reform Current led by dismissed Fatah leader Mohammad Dahlan, who is based in the United Arab Emirates.

An unspecified number of the movement’s supporters were arrested during the past few days. These include Haitham al-Halabi from the city of Jericho, who is one of the founders of the Preventive Security Service and a member of the Fatah Revolutionary Council in Nablus.

A Palestinian security source told Al-Monitor on condition of anonymity that those arrested were suspected of arms possession or transfer of “illegal and illegitimate” funds to the West Bank. The source refused to disclose further details.

On Sept. 27, the local Safa news agency quoted an anonymous source as saying the arrests were made based on instructions issued by President Mahmoud Abbas. The source indicated that the Palestinian Intelligence Service carried out dozens of missions — the nature of which was not mentioned — as part of ongoing monitoring operations of the Democratic Reform Current’s activities, in the wake of the normalization agreement between the UAE and Israel.

The source added that the Intelligence Service claims it had uncovered the financial line of activity between Dahlan and the West Bank. “Some of what was revealed was surprising,” the source said. Safa said large sums of money were recently brought by Dahlan’s movement into the West Bank. “It was surprising, however, that some of them were transferred and transported through high-ranking officials who are still on the job with the Palestinian Authority,” the source said.

Meanwhile, anti-Dahlan rallies were staged in more than one area in the West Bank, against the backdrop of the UAE-Israeli normalization agreement. Protesters chanted slogans against Dahlan and burned images of him. Some believe Dahlan played a role in crystallizing the agreement. The pace of anger amplified following the Hebrew newspaper Israel Hayom’s alleged misquote of the US ambassador to Israel, David Friedman, about the US administration considering replacing Abbas with Dahlan. The newspaper later removed the story.

Imad Mohsen, a spokesman for the Democratic Reform Current, told Al-Monitor that the security services have been carrying out, for nearly three weeks, an arrest campaign of the movement’s cadres who had not committed any violation. He denied that these arrests were related to the peace agreement the UAE concluded with Israel.

“There is no specific number for detainees, as the security services launch sporadic arrest campaigns,” he said. “Six people remain under arrest, despite the issuance of court decisions for their release.”

Mohsen argued that Dahlan’s movement is part of the Fatah movement, and that the decisions issued to dismiss the movement’s members from Fatah, including Dahlan, were invalid, and were made at Abbas’ direction.

The Fatah Central Committee dismissed Dahlan in June 2011, severed his official ties with the movement and referred him to the judiciary in criminal and financial cases.

Dahlan appealed the dismissal before Fatah’s court on July 27, 2011. His appeal was denied and the dismissal issued by the Central Committee was confirmed as legal. Palestinian security sources said at the time that security forces raided Dahlan’s house the next day and confiscated assets and weapons. Dahlan relocated to the UAE, serving as a special adviser to UAE Crown Prince Mohammed bin Zayed.

Regarding the accusations leveled against the detainees of receiving money from abroad and their illegal possession of weapons, Mohsen said, “Prosecutors have charged the detainees on five counts, which include joining a gang, receiving illicit money from abroad, buying weapons, defaming people in high standing or positions and violating the PA’s policies. These are baseless accusations; and the arrests were carried out in light of calls for elections.”

On the political party with whom the Democratic Reform Current will ally in the elections, Mohsen said, “We wish to run in the name of Fatah. We are part of it and we did not leave it. But, if the exclusionary team insists on its measures, we will have to run in the elections within a bloc that includes cadres from the Democratic Reform Current, independents and academics. We will fight to be part of the political system that will take shape.”

On whether Dahlan is the current’s candidate for the presidential elections, he said, “This decision is up to him. He must make up his mind, then consult with his movement’s institution about it.”

However, Fatah seems to have turned the page on Dahlan. Fatah spokesman Hussein Hamayel said, “For us, Dahlan is dismissed from the movement and he does not represent it. There is a judicial case against him, that must be settled by the Palestinian courts,” he told Al-Monitor.

Hamayel added, “These arrests are within the scope of jurisdiction and competence of the security services. They were made based on proper information received by these services.”

Hamayel continued, “There is consensus between Fatah and Hamas on national unity and partnership. This will be achieved through elections. The legislative and presidential representatives ruling our country will only be renewed through elections. The Palestinian people reject any interference by any state or any party affiliated with [a foreign] state and disassociate themselves from any conflicts in the region. Whoever wants to gain Palestine’s support must not conclude normalization and bilateral agreements with Israel dictated to serve [Israeli Prime Minister Benjamin] Netanyahu and [US President Donald] Trump’s personal interests.”

He concluded, “No Palestinian should accept to be a tool for any foreign party or serve a foreign agenda that harms the Palestinian cause.”