Dismissed Fatah leader Mohammed Dahlan has arranged for the delivery of another shipment of coronavirus vaccines to the Gaza Strip, raising questions about the aid’s link to the upcoming elections. 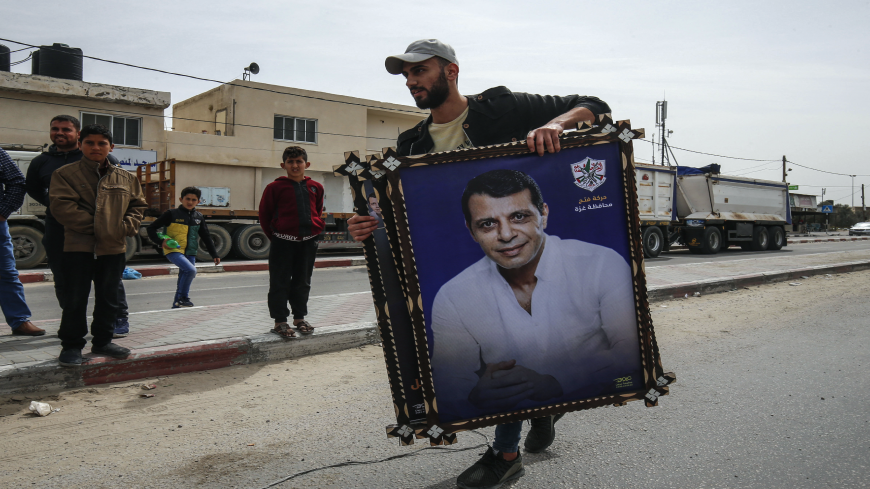 A Palestinian man carries a portrait of exiled Fatah movement's former security chief Mohammed Dahlan as a truck transporting a shipment of the Russian-made Sputnik V coronavirus vaccines provided by the United Arab Emirates arrives from Egypt via the Rafah crossing in the southern Gaza Strip, on March 11, 2021. Around 40,000 COVID-19 vaccine doses from the UAE arrived in Gaza, a delivery reportedly orchestrated by a rival of Palestinian President Mahmoud Abbas. - SAID KHATIB/AFP via Getty Images

Dahlan tweeted on March 10, “The arrival of the new batch that includes 40,000 doses brings the total number of doses [sent to Palestinians] to 60,000. We promise our people to continue every possible effort to provide more.” He explained that the Ministry of Health in Gaza will receive 20,000 doses, while 20,000 others will be sent to the West Bank.

Some analysts linked the increasing frequency of aid from Dahlan to his attempt to increase his popularity in the Gaza Strip ahead of the upcoming Palestinian general elections.

Imad Mohsen, spokesman for the Democratic Reformist Current headed by Dahlan, told Al-Monitor that his current has offered a series of aid to all social groups and denied reports that the increased aid is linked to the Palestinian elections. “The vaccine contracts were signed before the presidential decree was issued,” he said.

Mohsen added, “The UAE aid does not come at any political price, and nobody has asked us to give up any Palestinian right in return.”

Mohsen asserted that the aid offered by the current is unconditional, whether from the donors or for the beneficiaries. He clarified that the current’s policy is based on providing another model of national work far from the narrow partisan vision. He said, “The current wants to redraw the national arena and the political system, reposition Fatah on the Palestinian partisan map based on democracy and develop an inclusive vision toward all aspects of life.”

He noted that the Democratic Reformist Current has wide popularity in the Gaza Strip and has thousands of members. It expects to play a key role in the Palestinian political map after the legislative elections, he said, adding that the coming days will be filled with surprises.

Following the meeting of Palestinian factions in Cairo regarding the elections on Feb. 9, dozens of leaders from the Democratic Reformist Current returned, after having fled the Gaza Strip in the wake of the 2007 rift, out of fear of Hamas’ pursuit.

Mohsen explained that the return of several leaders from the Democratic Reformist Current to the Gaza Strip to strengthen and organize its ranks ahead of the elections is in line with the understandings reached between Hamas and the current in 2017 and the subsequent social reconciliation in 2018, which included compensation for hundreds of families who had lost their children in the 2007 events.

He said, “Hundreds of cadres were allowed to return to Gaza after their cases were settled. All remaining cases will be settled as part of the social reconciliation.”

For his part, Hamas spokesman Hazem Qassem told Al-Monitor that the return of members of the Democratic Reformist Current is part of the social reconciliation included in the 2011 reconciliation agreement. He explained that it is the inherent right of any Palestinian citizen to enter, leave and be present in the Gaza Strip, and it has nothing to do with political settlements.

He continued, “This formula is still indeed Hamas’ favorite, and this position is consistent with Hamas’ intention to use the elections to rearrange the Palestinian situation, end the division and achieve reconciliation.”

Qassem stressed that the aid provided by Dahlan preceded Abbas’ decree setting the dates for the elections, and he explained that Hamas values ​​this aid and believes the Palestinians have the right to obtain it. He did not comment on the possibility of underlying political costs.

Mustafa al-Sawaf, a political analyst close to Hamas, confirmed to Al-Monitor that the aid provided by Dahlan with the support of the UAE is not innocent and has political goals on both ends. He explained that the responsible authorities in the Gaza Strip are aware of this, as no aid is given without a political cost.

He indicated that the return of several of the Democratic Reformist Current’s leaders to Gaza after 14 years of absence is linked to the elections and to the settlement of their cases.

He said, “Hamas aims to form a national unity list with all Palestinians for everyone’s benefit. If it cannot do that, it will participate in a single list, and it will succeed.”

He ruled out that Dahlan would return to Gaza before the elections, as there are only a few weeks left to hold them.

Mukhaimer Abu Saada, a professor of political science at Al-Azhar University in Gaza, told Al-Monitor that Dahlan’s aid has been continuous to Gaza for several years, and it is unfair to link it to the elections. He believes the recent increase in aid aims at boosting Dahlan’s popularity and increasing his chances of obtaining 10 to 15% of the seats in the Palestinian Legislative Council if he manages to form a list that is not contested by the Electoral Court.

“I expect Dahlan to form a list of independent figures,” he said.

Abu Saada ruled out that the Palestinian Authority would receive vaccines from Dahlan, despite its need for them in light of the spike in coronavirus cases in the West Bank, due to political rivalries between the two parties.

He said, “It is difficult to determine the extent of support for Dahlan in the Gaza Strip, given the lack of honest public opinion polls and because the Gaza Strip has not had any elections since 2006.”

He expected Hamas to ally with Dahlan after the elections if the joint list between Fatah and Hamas has not been decided.

“Hamas is playing on the differences between Abbas and Dahlan and is trying to use this to its advantage,” he said.

For his part, political analyst and writer at the Palestinian al-Ayyam newspaper Talal Okal told Al-Monitor that Dahlan wants, through this aid, to send a message that he is a man of actions, not words, unlike the rest of the factions. He wants to cement his presence through actions tangible to Gaza’s citizens, he said, adding, “Palestinians will not vote according to the political program, but rather on the basis of meeting their needs and saving them from the state of misery and siege.”