The United Arab Emirates has sent a new medical aid shipment to the Gaza Strip, the second in a month, to help cope with the coronavirus crisis, raising questions about the role of Fatah’s dismissed leader and President Mahmoud Abbas’ archrival Mohammed Dahlan. 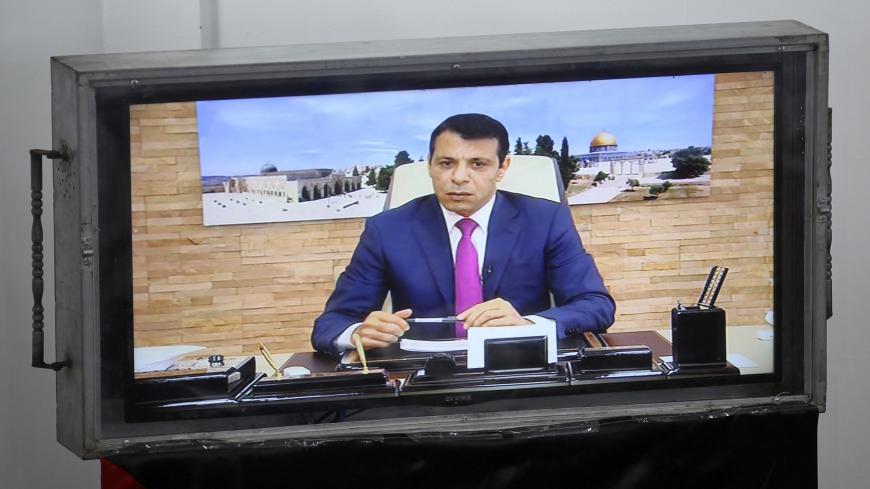 GAZA CITY, Gaza Strip — A plant for producing liquid oxygen to help the serious cases suffering from breathing problems due to the coronavirus reached the Gaza Strip Jan. 10, through the Rafah land crossing. The oxygen production plant, the largest in Gaza, comes as part of an Emirati medical convoy offered to the Ministry of Health in the besieged enclave.

The convoy reached Gaza thanks to the efforts of the Democratic Reformist Current headed by dismissed Fatah leader Mohammed Dahlan who is based in the United Arab Emirates (UAE). Dahlan is Palestinian President Mahmoud Abbas’ main political rival.

The convoy’s arrival in the Gaza Strip coincides with Abbas’ imminent announcement of presidential decrees to set the date for the Palestinian general elections. The aid seems to be part of Dahlan’s efforts to boost his popularity in the elections.

Ghazi Hamad, Hamas leader and undersecretary of the Ministry of Social Affairs, welcomed the convoy at the Rafah border crossing, in the presence of several leaders from the Democratic Reformist Current.

In a press conference held upon welcoming the convoy, Hamad thanked the UAE for its medical assistance to help the health authorities confront the coronavirus outbreak in the Gaza Strip, which is one of the world’s most populated areas with more than 2 million people living in an area of 365 square kilometers (141 square miles).

He also thanked the Democratic Reformist Current for its contribution to the arrival of aid to the Gaza Strip.

The Ministry of Health in Gaza had warned on Nov. 25, 2020, that liquid oxygen was running out at the European Hospital in southern Gaza.

According to the latest statistics of the Ministry of Health published Jan. 12, deaths in Gaza from the coronavirus reached 453, and 211 cases required medical care at a hospital with 112 patients needing oxygen to help them breathe.

The UAE convoy is the second to Gaza in a month; the Gulf state had already sent a medical aid shipment on Dec. 17, 2020.

Ashraf Gomaa, a Democratic Reformist Current leader, told Al-Monitor, “The recent UAE convoy was sent in response to the Ministry of Health’s appeal for help amid the shortage of liquid oxygen. The convoy will help the health situation in the Gaza Strip amid the daily rise in the number of coronavirus cases.”

Gomaa said that so far, the UAE has donated to Gaza 130 ventilators, when only 100 ventilators were available in the Gaza Strip.

He noted that Dahlan is engaging in talks with UAE officials to provide the coronavirus vaccines and offer them as free aid to the Gaza Strip soon.

On May 21, 2020, the Palestinian Authority (PA) refused to accept the UAE’s coronavirus-focused medical aid sent to the West Bank through Israel, due to the UAE’s attempts at the time to normalize relations with Israel. On Aug. 13, this normalization was officially declared.

Mahmoud al-Aloul, deputy head of Fatah, told Al-Monitor, “Any aid sent to the Palestinians through normalization with Israel and without coordination with the PA is considered dubious and is rejected.”

He noted that the UAE is exploiting the coronavirus outbreak in the Palestinian territories to achieve political goals, mainly to appease the Palestinian anger over the UAE’s normalization agreement with Israel and to polish Dahlan’s image in the eyes of the Palestinians.

Aloul said, “Dahlan’s candidacy in the Palestinian elections is totally refused since a Palestinian court charged him with crimes related to corruption and stealing people’s money, and he is a fugitive [taking refuge] in the UAE.”

Member of Hamas’ political bureau Mousa Abu Marzouk told Al-Monitor, “We welcome any humanitarian aid that reaches us through any state, and we will not refuse any assistance for political reasons.”

He was surprised that the PA did not accept the medical aid due to normalization between the UAE and Israel.

He added, “The PA carries out security coordination with Israel that is occupying the Palestinian territories, then it refuses to welcome aid from the UAE for normalizing ties with Israel. This is a strange contradiction.”

Talal Okal, a journalist at the Palestinian Al-Ayyam newspaper, told Al-Monitor that the UAE’s recent aid convoy and the imminent general elections are connected. “The UAE wants to strengthen Dahlan’s popularity in Palestinian circles to nominate him to replace Abbas who has failed to make a breakthrough in the peace process,” he said.

He noted that Dahlan, who is backed by the UAE, enjoys approval of the United States and other Arab countries such as Egypt.

Ahmad Awad, a professor of political science at Al-Quds University in Abu Dis, told Al-Monitor, “Dahlan will make every effort to run in the upcoming elections since this is his only hope to return to the Palestinian political arena.”

He added, “But Dahlan is not very popular among the Palestinians, especially in the West Bank. He is wanted by the Palestinian judiciary. I think his return will not be easy."