The UAE and Qatar are neck and neck in the Gaza Strip, with both parties pumping money and aid into the besieged enclave that is struggling under tough economic, humanitarian and health conditions made worse by the coronavirus. 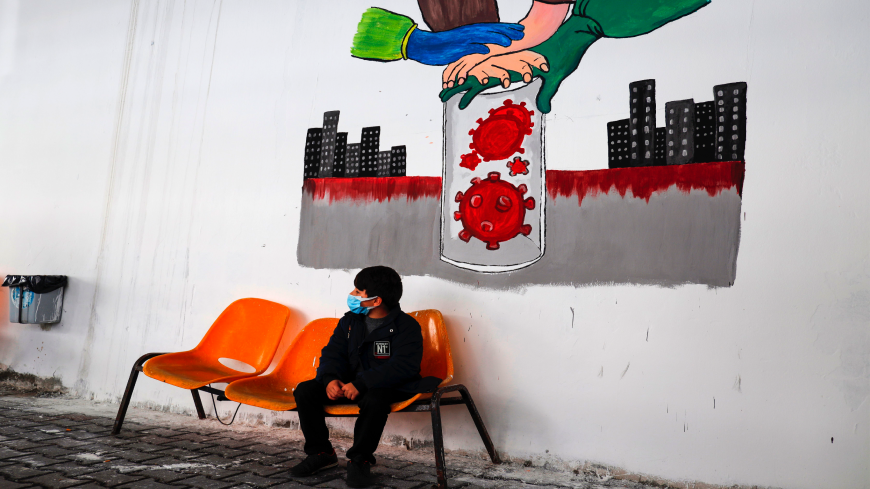 GAZA CITY, Gaza Strip — The health system in the Gaza Strip is on the verge of collapse amid the outbreak of the coronavirus and the disappearance of dozens of medications from the warehouses of the Ministry of Health. PCR tests have also run out, and most intensive care beds and ventilators are already in use in hospitals.

In this context, Ministry of Health officials are calling on the world to provide urgent support to prevent the health system’s collapse and save the lives of those in need of health care.

The United Arab Emirates (UAE) was the most recent country to offer support to the Gaza Strip. On Dec. 17, it sent a cargo aircraft loaded with 14.4 tons of medical supplies and PCR tests. The aircraft landed at Cairo International Airport, and the supplies were transported by land to the Gaza Strip. The Islamic National Commission for Development and Social Solidarity — a group that includes most Palestinian factions, including Hamas and the wing of defected Fatah leader Mohammed Dahlan — received the shipment and delivered the supplies to the Ministry of Health in Gaza.

The UAE medical supply shipment is the third to the Palestinian territories since May. It was processed a few days after Qatar offered a financial grant to the Ministry of Health in the Gaza Strip to cover for the shortage of liquid oxygen in Gaza hospitals. Qatar also assisted the Gaza Strip in March with a $150 million grant to help Palestinians face COVID-19.

Hamas official and Undersecretary of the Ministry of Social Affairs in the Gaza Strip Ghazi Hamad told Al-Monitor that the medical supply shipment sent by the UAE to Gaza will help alleviate the health crisis, even if temporarily.

Hamad indicated that his movement is open to aid from any state that wants to ease the suffering of the Palestinian people and Gazans. He expressed his gratitude to the UAE for sending the necessary medical supplies, and he hopes the UAE and other states continue to provide all forms of assistance to the Gaza Strip to save the health system from collapse due to the pandemic.

More than 34,000 cases of the virus have been registered, with 283 deaths, since the outbreak began in the Strip in March.

An official close to the Qatari ambassador in Gaza told Al-Monitor on condition of anonymity that Qatar plans to deliver a shipment of coronavirus vaccines to the Gaza Strip in the coming stage to vaccinate the medical staff.

He noted that Qatar was among the first countries to help Palestinians fight the coronavirus — specifically in the Gaza Strip. Hundreds of thousands of food baskets and meals were also distributed by Qatar to those who were sick and quarantined, he added.

The Emirati-Qatari competition on the Gaza scene did not appear overnight but has been ongoing for years.

The UAE has offered financial and relief assistance worth millions of dollars to Gazans through his organization for years.

The aid reached its peak between September 2017 and June 2019, when the UAE granted, through the Islamic National Commission for Development and Social Solidarity, $8.7 million ($50,000 per family) to 174 families who lost a child in the 2007 internal clashes that killed over 600 people.

Ashraf Jomaa, an official in the Democratic Reformist Current led by Dahlan and a member of the Islamic National Commission for Development and Social Solidarity, told Al-Monitor, “The UAE aid came in response to the calls of the Ministry of Health amid the coronavirus outbreak in Gaza,” noting that they arrived at a delicate time.

Jomaa said the aid entered the Gaza Strip after coordination between the UAE and the commission, and he expressed his gratitude to the UAE for its support.

The UAE aid surprised Gaza Strip inhabitants, as it came after the normalization of ties between the UAE and Israel and the ensuing protests led by Hamas and Palestinian factions in mid-August condemning this deal. Some interpreted the aid as a move to appease Palestinian anger toward the UAE.

Abdul Sattar Qassem, a professor of political science at An-Najah National University, told Al-Monitor that Hamas made a mistake by allowing the entry of UAE aid to the Gaza Strip. He believes the UAE seeks to polish its image after its normalization of ties with Israel, in addition to its constant attempts to compete with the Qatari role in the Gaza Strip.

Talal Okal, political analyst and writer at the Palestinian al-Ayyam newspaper, told Al-Monitor the UAE is trying to compete with Qatar in the Gaza Strip, although the direct Qatari support for Gaza outweighs the Emirati support.

Okal noted that the UAE support does not actually contribute much to solving the health crisis in the Gaza Strip, and the UAE has been competing with Qatar in Gaza for years to distance Qatar from Hamas and weaken the movement.

The UAE’s direct or indirect aid to Palestinians through the UNRWA has reached $840 million since 2013, while Qatar’s direct aid to the Gaza Strip exceeded $1.4 billion between 2012 and 2020.