The UAE sent a medical aid convoy to the Gaza Strip as the COVID-19 pandemic worsens, in the first such shipment since normalizing ties with Israel. 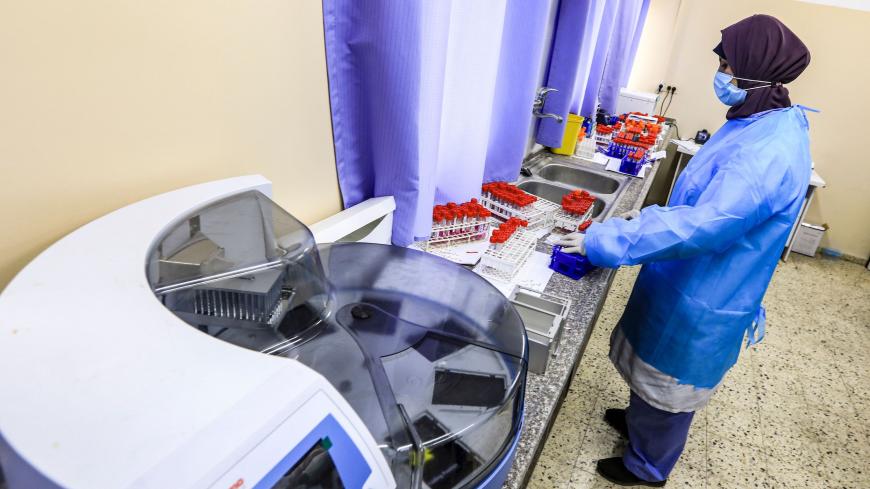 GAZA CITY, Gaza Strip — Medical aid from the United Arab Emirates arrived in the Gaza Strip Dec. 17, the first such shipment since the UAE announced full diplomatic relations with Israel on Aug. 13.

The convoy was loaded with 14.4 tons of medical supplies and testing kits to support efforts to contain the spread of COVID-19 in the besieged enclave, according to the Emirates News Agency, which stated, “This aid is part of the UAE's commitment to providing continuous support to the Palestinian people.”

The Health Ministry in Gaza expressed no objections to the Emirati medical aid despite Palestinian discomfort with the UAE's normalization of its relations with Israel.

As of Dec. 28, infections of COVID-19 in the Gaza Strip reached 38,614 cases and 340 deaths, according to the Health Ministry, which announced Dec. 6 that its only laboratory had stopped conducting PCR tests because it ran out of testing kits. The ministry also warned the spiking coronavirus numbers are endangering the lives of over two million people in Gaza.

The undersecretary of the Ministry of Social Development in the Gaza Strip, Ghazi Hamad, said at the convoy's reception at the Rafah crossing that the UAE aid arrives in Gaza amid critical conditions with ever-increasing COVID-19 cases and pressure on Gaza's 14,000 health care workers.

The Islamic National Commission for Development and Social Solidarity — a group that includes most Palestinian factions including Hamas — received the UAE shipment and delivered it to the Health Ministry.

Spokesperson Sherif al-Nairab told Al-Monitor that the aid shipment was provided by the Emirates Red Crescent in response to the Gaza Health Ministry's repeated calls to “urgently intervene to provide testing kits and support the urgent needs of the health sector.”

He noted that the convoy included medical assistive devices such as 150 electric wheelchairs in addition to 200,000 swabs for rapid tests, personal protective gear and sterilization equipment. He said there is no link between the aid and the UAE normalization with Israel, saying, “We are used to getting aid from the UAE, and we must thank any party that supports the Palestinian people.”

Nairad stressed, “The hospitals in the Gaza Strip and the warehouse of the Ministry of Health have been in urgent need of support in light of the pandemic,” and added, “We are constantly requesting more support to remedy the catastrophic situation in Gaza.”

Imad Mohsen, spokesman for the Democratic Reformist Current headed by dismissed Fatah leader Mohammed Dahlan, told Al-Monitor, “The UAE has never stopped providing aid to the Palestinian people and supporting them in all their places of existence, not only in the Gaza Strip. The UAE has been doing this for 50 years.” He stressed that the aid is not linked to any political issue and said that accepting it comes within the framework of the “brotherly relationship” between the Palestinians and the UAE.

Mohsen pointed out that the UAE is the second largest financial donor to the Palestinian Authority and one of the largest donors to the United Nations Relief and Works Agency. “Wisdom necessitated accepting this aid and thanking the UAE for it,” he said. According to the Emirati newspaper Al-Ain, the UAE supported the agency with over $187 million between 2015 and 2020.

Bassem Naim, the head of the Palestinian Council on International Relations, told Al-Monitor that the timing of the aid does give it a “special meaning.” He added, “Gaza is facing a difficult humanitarian situation and it receives aid from all parts of the world. It cannot refuse this aid based on political positions.”

Naim called the UAE’s normalization with Israel unjustifiable and said that Arab countries must support the Palestinian people. He said, “To express this support, the least they can do is take a political stance to refuse any relationship with the occupation.”

The president of the International Commission to Support Palestinian Rights, Salah Abdel Ati, told Al-Monitor, “We welcome any assistance provided to the Palestinians because this is a right and a duty of the international community and the Arab parties.” He added, “We welcome the UAE aid, but it is not sufficient to meet the needs of the health sector in Gaza,” and stressed, "We need to differentiate between relief and politics. We must condemn any step that violates Palestinian rights, and at the same time we cannot allow our relations with the Arab countries to fade away.”

He pointed out that many medicines are not available in the Gaza Strip, straining a health sector that is on the verge of collapse.

Abdel Ati called on Arab countries to press for an end to the Israeli siege of the Gaza Strip and support the Palestinians in the occupied territories, particularly in Gaza.