Doctors are deeply concerned about the devastation likely to occur if the coronavirus spreads into northwest Syria, particularly the camps for the displaced. 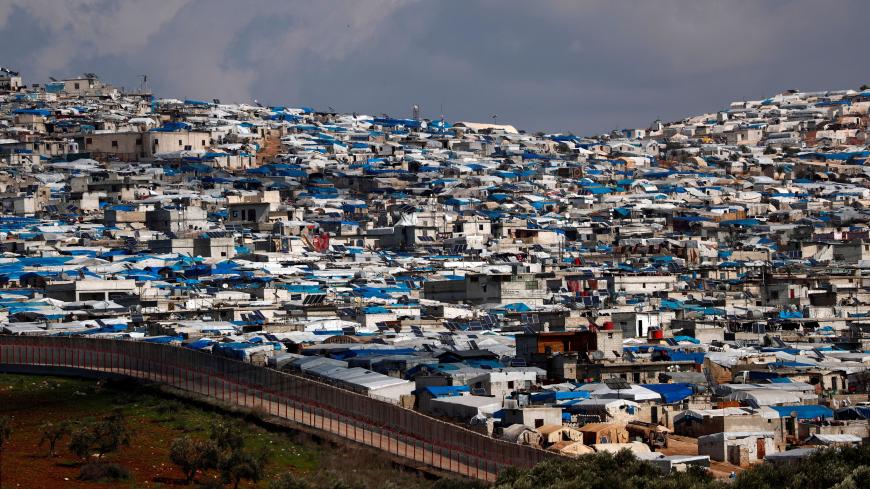 ALEPPO, Syria — Humanitarian groups fear catastrophic consequences if the coronavirus reaches overcrowded camps for the displaced in opposition-held areas in northwest Syria, so the organizations are boosting their efforts to raise awareness among the people living there.

From a clinic providing primary health care services in Al-Nour camp, 44 kilometers (27 miles) north of Aleppo city, community health workers have distributed educational brochures, going from one tent to another. The brochures contain drawings and instructions urging people to mind their personal hygiene, wear masks and not leave their tents unless absolutely necessary. The fliers also outline what people should do if they suspect they have COVID-19, the disease the virus causes.

Omar al-Hamoud, a doctor and administrative director of the clinic at Al-Nour camp, told Al-Monitor, “We are afraid that the coronavirus might reach the camps. It would then be difficult or nearly impossible to contain it.”

According to the latest report issued by the Assistance Coordination Unit, a Syrian nongovernmental organization in charge of coordinating donation efforts, the number of displaced camps in November had reached 320 in northern Idlib and northern Aleppo, near the Turkish borders. Nearly 1 million people in Syria’s northwest had to leave their homes due to a large-scale offensive waged by the Syrian regime in January. That campaign stopped after a cease-fire agreement was reached March 6 through mediation efforts by Turkey and Russia.

However, a large number of displaced people still live in camps and temporary housing along the Turkish border, and these camps lack care, health and hygiene services. Many people have serious underlying conditions such as diabetes or chronic heart disease.

The Independent Doctors’ Association — an independent NGO founded in 2012 by Syrian doctors from Aleppo — runs 33 medical centers in opposition-held areas in northern Aleppo, and it provides health services to nine camps. It has also established four rapid-response teams dedicated to temporary shelters.

Bakri Moaz, the association's medical director, told Al-Monitor, “If the coronavirus reaches opposition-held areas, it will definitely have dire consequences because of its high rate of transmission. The camps’ population is massive and jammed in a small space, and there are many camps.”

He added, “The camps constitute a conducive environment for the spread of the virus, for several reasons. Most camp residents are elderly or children, who are the most vulnerable. Besides, self-isolation in camps is quite hard, because the tents are close to each other, and the economic circumstances are tough. People have to leave their tents to work. Besides, toilets, bathrooms and water tanks in the camps are common [areas]. Therefore, people gather to get the services, and the risk of infection increases.”

The Syrian Response Coordination group, a humanitarian NGO working in Idlib, assessed the ability of the health sector in opposition areas to cope with the pandemic by documenting the capacity of hospitals and medical posts relative to the population.

According to statistics the group published March 27, there is one hospital bed for every 2,378 people in the opposition areas in northwestern Syria, and for every 37,549 people, one respirator is available. Respirators are essential for treating advanced cases.

Moaz told Al-Monitor, “Health care in Syria is basic and modest. In case of an outbreak, the hospitals will be under great pressure beyond their capacities. The virus has already taken its toll on the most advanced health systems in the world. Imagine what it would do to a country like Syria.”

Despite the global panic about the coronavirus, life continues almost naturally in northwestern Syria, with little regard to calls for social distancing and home isolation. The markets are crowded, and people walk the streets without protection methods such as gloves or masks. Shops are open late.

“It's difficult to implement [restrictions] under circumstances like the ones in Syria. How can you prevent a person from working and offer them nothing instead? Local authorities in opposition-held areas have no capacity to offer compensation to people and provide them with their basic needs. They are unable to implement a quarantine," Moaz added.

Maram al-Sheikh, health minister of the opposition-led government, told Al-Monitor, “We have taken several measures to curb the spread of the coronavirus. We have adopted social distancing by suspending classes in schools and universities and adopting online learning. We have also closed the crossings with the Syrian regime and are testing people at the border crossings with Turkey.”

He added, “We don't have coronavirus cases in opposition-held areas so far. This is simply because of the measures taken and because the area is completely closed. A single laboratory in the opposition-controlled areas, located in Idlib, is able to conduct tests to detect infection with the coronavirus, as it has [diagnostic] devices. Analyses of suspected cases are made in this laboratory, or through sampling and examination in Turkey.”

Shaham Makki, director of the epidemiological laboratory in Idlib, told Al-Monitor on April 5 that all 27 cases tested in the laboratory had come back negative. No cases had been reported in opposition-held areas in northwest Syria at the time of this writing.

In all of Syria as of April 7, 19 cases of COVID-19 had been confirmed, including two deaths.