The coronavirus continues to spread in the opposition-controlled areas of Syria, with daily counts ranging between 300 and 500, and health workers say a health catastrophe is imminent. 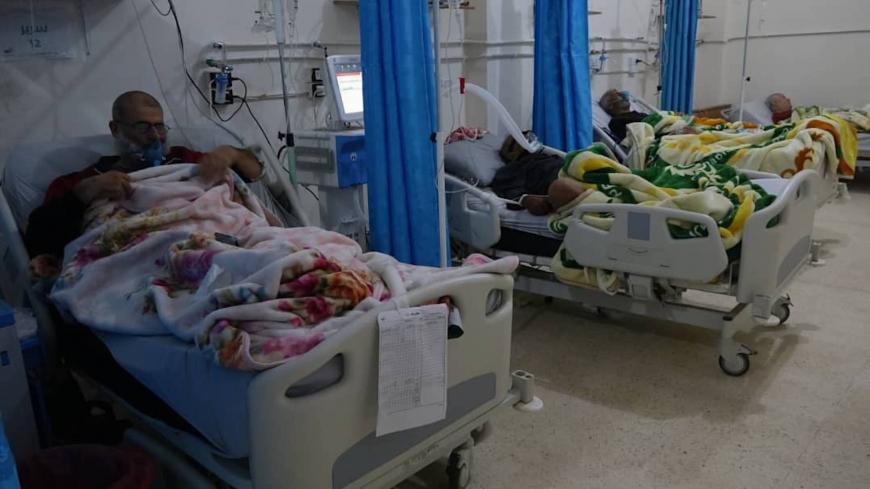 IDLIB, Syria — The Syrian civil defense forces known as the White Helmets announced in a Nov. 22 Facebook post that seven people — six men and one woman — had died in hospitals and medical centers dedicated to coronavirus cases in the city of Idlib and its countryside. The bodies were transported for burial to the cities and villages of Kafr Tkharim, Maart Misrin, Killi, Barisha, Sarmin in the Idlib countryside and the city of Darat Izza in western Aleppo.

The White Helmets added that its teams also transported two people infected with the virus and seven others suspected of being infected to quarantine centers in Idlib for treatment.

The Coordinators for Humanitarian Response group said in a Nov. 14 Facebook post, “We express our grave concern about the fate of hundreds of thousands of civilians living in the camps amid the growing infection cases. The outbreak of the novel coronavirus in the camps is a major and extremely dangerous development for the camp residents, who have been living in dire conditions for years.”

Al-Monitor met with Dr. Maram al-Sheikh, a former health minister in the Syrian Interim Government of the Syrian National Coalition, which manages areas under the control of pro-Turkish factions. He said, “Registered cases are rising every day, bringing the total number of cases to over 13,500 across the opposition-held areas.”

“There are only about 42,000 PCR tests per day, which suggests that many cases are not being detected. The death toll hit 117 in the [medical] facilities, where some cases are still being monitored, not to mention other deaths at home that were attributed to other causes. Like anywhere in the world, many infected people have mild to moderate symptoms, while others suffer from respiratory distress that requires them to be hospitalized,” Sheikh explained.

“The situation is still under control in terms of ICU beds, but we cannot long remain on top of things with the growing number of infections. If push comes to shove, we might not be ready. We have about 230 beds in hospital wards, in addition to 68 beds and a ventilator in seven centers dedicated to coronavirus patients,” he added.

He said, “We are planning on increasing bed capacity by 30%” in the Syrian Interim Government areas, which does not include Idlib. “The camps are often virus superspreaders because of general human contact and crowds in the camps and tents, not to mention the difficulty of applying social distancing and sanitation measures,” he added.

Salem Abdan, head of the Idlib Health Department affiliated with the Syrian opposition, told Al-Monitor, “With the rising number of cases, the number of patients who required hospitalization or quarantine is increasing too — 80% of ICU beds are currently occupied.”

“In Idlib, we have 60 beds in the Ziraah or Agriculture Hospital in the city of Idlib, 70 beds in the field hospital at the Carlton Hotel, 40 beds in Jisr al-Shughour hospital, 60 beds in the Sham Hospital and 40 beds in Kafr Takharim hospital. We are also planning to bring 60 beds to the Salqin quarantine hospital, which will open soon. This is in addition to 80 ventilators available,” he added.

Abdan also spoke of the displacement camps' crowded and poor sanitary conditions, which “make them virus superspreaders, causing a surge in infection cases and therefore the number of people who require hospitalization. This will strain hospitals’ and the health sector’s capacities, not to mention the shortage of medicine and staff. Medical teams are trying to fight the virus with all available means, but the war and the shortage of medical equipment and hospitals are not making things easy,” he added.

Abdan stressed Idlib's small number of medical teams. “This is why we call on our people to commit to strict prevention measures and stay away from crowds and gatherings. Those who experience symptoms ought to to self-confine to stem the spread of the virus and help the health sector remain on its feet,” he said.

Omar Ahmed, 65, lives in a camp in Atme in the Idlib countryside near the Turkish border. “I felt very tired, short of breath, and I ran a high temperature in the middle of the night. My children drove me to the Atme hospital. The road was flooded and full of potholes, so we had to drive slowly,” he told Al-Monitor’s correspondent who visited him at the hospital Nov. 18.

“We arrived at the hospital. They refused to admit me because they did not have enough beds. We then drove to al-Dana Hospital, about 12 kilometers [seven miles] away. We were turned down there as well. We traveled about 35 kilometers [22 miles] to the city of Idlib, and I was finally admitted to the Agriculture Hospital. I am still … receiving treatment and recovering,” he added.

Umm Muhammad, a 60-year-old resident of a camp in Deir Hassan in Idlib’s northeast countryside, told Al-Monitor, “I live with my six grandchildren. They lost their father. My son died three years ago in the regime’s shelling on the city of Maarat al-Numan. Their mother and I are looking after them. We all live in one tent.”

She recounted, “Their mother and I had a high temperature and a cough, but we did not go to the hospital as we could not leave the children alone. We did not take any PCR test either. But I believe we had contracted the virus. It was not the flu. On the fourth day, my health deteriorated and I couldn’t go to the hospital. However, I visited a medical center where I was given medicines prescribed for COVID-19.”

Umm Muhammad added, “We don’t wear any face masks and we could not isolate ourselves from the children as we all live in one tent.”