Doctors working in already short-staffed hospitals are struggling with a flare-up of new cases in the country's last rebel stronghold. 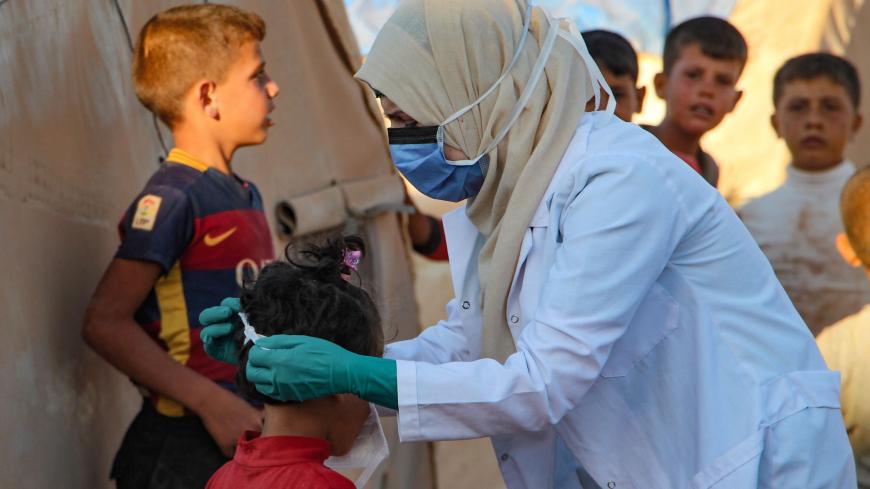 A Syrian doctor, on her own initiative, instructs children how to properly wear a mask during the novel coronavirus pandemic crisis, in the displacement camp of Janid near the town of Dana, east of the Turkish-Syrian border in the northwestern Idlib province, on July 26, 2020. - IBRAHIM YASOUF/AFP via Getty Images)LOUAI BESHARA/AFP via Getty Images

Nasser al-Mefleh, a pediatric surgeon in Idlib province, knows the risks that come with working as a health care provider in northwest Syria where hospitals like his are favorite targets of the regime’s warplanes. COVID-19, he says, is just the latest hazard.

Mefleh tested positive for the coronavirus July 10 after several days of flu-like symptoms. He believes he contracted the virus during his shift at Bab al-Hawa hospital near the border with Turkey in northern Syria.

Days before, at the same hospital, northwest Syria recorded its first confirmed case: a 39-year-old neurosurgeon who had recently returned from Gaziantep, Turkey, and traveled to Idlib from northern Aleppo.

“We as medical staff are more exposed,” Mefleh told Al-Monitor via WhatsApp. “Personal protection methods are limited, and there is no way to protect 100%.”

At least 12 Idlib-based doctors and nurses have tested positive for the virus this month, said Omar al-Hiraki, an orthopedic and trauma surgeon at Bab al-Hawa hospital. His now-empty facility is currently being sterilized while the infected doctors isolate at home.

The World Health Organization (WHO) has recorded 29 total cases in the region, but limiting testing means the real case count is almost certainly higher. Syria has entered the stage of the pandemic that the United States lived through in April, said Zaher Sahloul, president of Chicago-based nonprofit MedGlobal. By his count, more than 50 physicians across Syria are infected with the coronavirus.

“Any physician who is out of service because of COVID or who dies because of COVID will not be replaced,” said Sahloul. “In northwest Syria, there’s a huge shortage — and huge is an understatement — compared to the rest of Syria."

Nearly a decade of war created a mass exodus of health care professionals. A further 900 have died in attacks carried out by the Syrian government and its allies, according to the New York-based Physicians for Human Rights.

Months before Syria reported its first case of COVID-19, Idlib suffered through a deadly air campaign and ground offensive waged by the regime and its Russian backers. The Syrian government’s warplanes pummeled the region from December to early March, forcing up to 1 million people to flee their homes and destroying or damaging over 80 hospitals and medical facilities.

Those hospitals still functioning face a crippling lack of resources. Idlib has fewer than 300 intensive care unit beds and a limited number of ventilators, most of which are currently in use, according to the Union of Medical Care and Relief Organizations.

Hospitals must also contend with a dangerous shortage of oxygen concentrators and cylinders. Sahloul warns the supplies will be consumed quickly should a hospital have even a few cases.

Idlib, with a population of nearly 4.2 million, has just one laboratory equipped with a polymerase chain reaction (PCR) testing machine. At most, the lab can run 100 tests per day, says Hiraki, the surgeon.

“That’s unreasonable,” said Hiraki. “How can I perform surgery for patients without being sure that they are COVID negative?”

Testing is more widely available in government-held areas, with Damascus having received five PCR machines from the WHO. As of Friday, the Ministry of Health confirmed 608 infections, including 44 among health care workers. The Kurdish-controlled northeast region has reported a handful of cases.

Just miles from the Bab al-Hawa hospital, more than a million displaced Syrians live in crowded camps along the Turkish border, where social distancing and proper hygiene is virtually impossible. Malnutrition and poor health care have comprised their immune systems, and a recent Russian-forced UN Security Council vote to slash cross-border deliveries could further reduce what little aid they receive.