Amid lack of international aid and a fragile health system, officials and activists are concerned about the rapid spread of the coronavirus in northwest Syria. 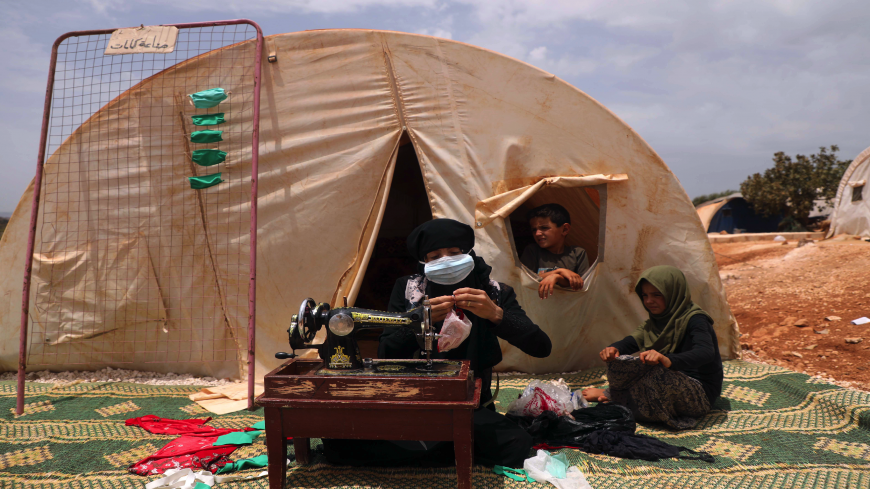 Sheikh said in a tweet, “Today, we regret to announce the first coronavirus case contracted by a health worker in one of Idlib’s hospitals. The hospital and its living quarters have been closed, and those who had been in contact with the patient have been swabbed and isolated, and the crisis cell is to hold an emergency meeting to activate its contingency plan.”

In this regard, the Response Coordination Group in Syria issued a warning July 15 in the wake of an increase in the number of cases in Idlib and the northern countryside of Aleppo.

“The absence of urgent humanitarian measures in the northern Aleppo countryside and northwestern Syria would lead to devastating scenarios,” the group said in a statement.

It called on the concerned international bodies to put an urgent intervention plan in place in order to stem the spread of the virus in the said areas.

The group added that while the virus poses a major threat to countries that enjoy strong health systems, such a threat is much greater in northwestern Syria where the health system has collapsed and dozens of medical facilities have gone out of service.

It strongly warned against the spread of the coronavirus in prisons and camps erected for the displaced in the region, and said the results would be devastating in the absence of urgent measures.

The epidemiological surveillance laboratory of EWARN, with the Support Coordination Unit, recorded July 21 three new cases in the city of al-Bab after they came into contact with the first case of COVID-19, bringing the total number of cases to 22.

The patients were from the cities of Azaz, al-Bab, Bab al-Hawa, Sarmada, Atme, al-Dana and Idlib.

The laboratory said that 74 people took the test July 21, bringing the total number of tests performed to date to 3,071, of which 22 were positive and 3,049 negative.

Two recoveries have been recorded so far, according to the laboratory.

In this regard, Sheikh told Al-Monitor there are 22 cases confirmed as of July 22 but from several clusters (meaning several sources not linked to the first positive case), and this is a dangerous indication of a potential explosive increase in the number of cases over the next few weeks.

The minister added, "So far, the only laboratory available is the EWARN laboratory in the city of Idlib. The plan is to open three additional laboratories in Jarablus, Azaz and Afrin, as the health of our people is what matters most to us," he continued.

“We fear for the elderly and chronic disease patients, as they are the most vulnerable, and camps remain the most dangerous environment due to overcrowding, the lack of clean water sources and poverty,” Sheikh said.

He added, “What we also fear is the accelerated increase in cases because the health system cannot afford such a scenario, and this would increase the death risk due to the lack of available hospital beds.”

Sheikh noted that the health sector in the north is already fragile as a large number of health facilities were bombed and medical personnel targeted, and there are no sufficient financial and human resources or equipment.

He said a response plan has been developed in cooperation with the World Health Organization (WHO) to increase the capacity of hospitals in the region, provide testing kits, activate a special referral system, and launch awareness campaigns and infection control measures.

He added, “There are no more than 200 ICU beds equipped with ventilators, and not all of them can be dedicated to coronavirus patients. Ninety ventilators with ICU beds have been requested, and test kits have been provided to the laboratory. About 10,000 pieces of surgical gloves have been supplied along with medical masks for the health personnel. A sewing workshop has been recently held by the civil defense to manufacture cloth masks for residents with a production capacity of 1 million masks per month. The plan includes three main isolation hospitals and three backup hospitals with about 60 ventilators with an ICU bed, three of which were activated in total. As for the community isolation centers, the plan is to create 30 community isolation centers for light and medium cases not requiring ventilators. Quarantine centers near border crossings and internal crossings remain a major challenge because they need expensive infrastructure and require a large capacity. Therefore, crossings must remain closed.”

Sheikh said international support is limited and slow due to global difficulties, and the most important supporting organizations are the WHO and the Syria Recovery Trust Fund.

Ubaida Dandoush, response coordinator at the Syria Relief & Development organization, told Al-Monitor their role was to train some hospitals on how to take PCR samples and refer suspected cases.

“We have trained hundreds of cadres to deal with this pandemic and spread awareness among civilians. We have set up 25 awareness teams, and we are cooperating with the director of health in Idlib and with the WHO,” Dandoush said.

Ehab al-Bakour, an activist residing in Idlib, told Al-Monitor, “The difficulties facing the health sector in Idlib are primarily exemplified by people who refuse to take the coronavirus seriously. Add to this the lack of logistics to deal with this pandemic, such as ventilators and isolation beds, and the lack of specialized hospitals equipped to receive large numbers of cases.”

He stressed that international support is not at the level required for such a poor region that has been devastated due to war, hunger and overpopulation. If developed countries faced great difficulties in facing the epidemic, he asked rhetorically, what is expected of Idlib?