‘Nobody cares about us’: Syrians stuck at Rukban camp decry lack of testing

Syrians in the Rukban camp near the Jordanian border hope the coronavirus does not reach their isolated area as they have no coronavirus test kits; they also cannot cross the border into Jordan for any other type of medical care unless they have taken such a test and have proven negative. 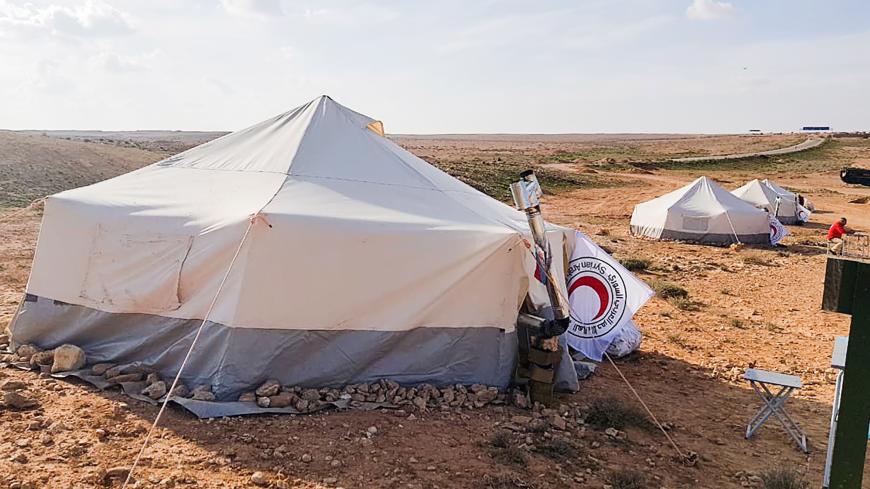 In a remote strip of land along the Jordan-Syria border just miles away from a US military base, thousands of trapped civilians are bracing for a coronavirus outbreak they fear will cripple their isolated community.

“It would be a disaster,” said Um Mohammed, a midwife at Rukban camp in southeastern Syria. “It would be the end of the people who are living in Rukban.”

Reached by phone, Um Mohammed requested Al-Monitor use a pseudonym for security reasons.

“We don’t have the right medicine or the appropriate place to quarantine the patients,” she said. “There is nothing we could offer to them.”

In recent weeks, Um Mohammed and other organizers in the camp have carried out an awareness campaign, warning fellow Rukban inhabitants that poor hygiene could hasten the spread of the disease. Children have been told not to play in the mud, and adults were cautioned against kissing and shaking hands.

But Um Mohammed has no way of knowing for sure if her campaign is working — there are no tests in the camp.

“No testing is available inside the settlement. COVID-19 testing samples from Al-Rukban, as well as all other parts of the country, should be referred to the Central Public Health Laboratory (CPHL) in Damascus,” World Health Organization (WHO) spokesperson Yayha Bouzo told Al-Monitor by email.

Bouzo noted that accessing Rukban is difficult and “requires pre-coordination and deconfliction between parties to the conflict.”

To that end, the United Nations says WHO, the Syrian government’s Ministry of Health and the Syrian Arab Red Crescent are working to get coronavirus tests to the 34-mile point at the edge of the “deconfliction zone” set up by nearby US troops at the al-Tanf outpost.

The COVID-19 testing supplies are for those who leave the camp to “ensure their and the communities’ safety before they proceed to the designated Homs collective shelter” in government-controlled territory in Syria, the UN wrote.

“This would, by definition, mean those accessing the tests had to return to government control in order to do so,” said analyst and author of the “Syria in Context” newsletter Emma Beals.

“Leaving the camp to access the tests at the edge of the Tanf area would put those residents at risk,” said Beals. “The majority of those still living at Rukban have stated that they don't wish to return to government-controlled areas of the country because they have security fears.”

Most residents of Rukban are originally from Homs province, which spans from the Lebanese border to Syria’s eastern desert region, and fled to the tented settlement after escaping Islamic State violence.

The estimated 12,000 who remain in the camp have chosen life in total squalor over the risk of forced military conscription and reprisals from the Syrian regime, which has offered “safe passage” for those wanting to return home.

“It would be a way to prison, not to home,” said Abu Saeed, a resident of Rukban who fled Homs province in 2015. “If I go to the regime to take a test, I will not be able to return here.”

The situation in Rukban was dire well before the novel coronavirus began spreading in Syria. Just a handful of humanitarian aid convoys have reached the camp in recent years, the last of which was in February 2019.

“Nobody gets into the camp. Nobody,” said Mouaz Moustafa, executive director of Syrian Emergency Task Force, a Washington-based nonprofit.

“The only people that come in are Damascus, the [Syrian Arab Red Crescent] and UN offices that are considered by the residents of Rukban as intelligence agents for the regime,” he said.

Without a proper medical facility for the camp’s one doctor to work in, diseases that are treatable elsewhere can be life-threatening in Rukban, where a majority of residents are women and children.

Last year, at least a dozen children in the camp died from hypothermia, including five newborns.

For residents to access a United Nations-supported health clinic on the Jordanian side of the border, authorities are now requiring they prove they have been first screened for COVID-19. No testing at the camp has meant no access to the desperately needed clinic.

The yearslong humanitarian crisis in Rukban is entirely man-made. Neither Jordan, which sealed its border after a deadly suicide bombing in 2016, nor the government of Syrian President Bashar al-Assad and its ally Russia, will take responsibility for feeding the camp.

Just over 10 miles down the road, American troops operate a small military base where they are training their local Syrian partners, the Maghawir al-Thawra, to quash the Islamic State and Iranian influence in the region.

Despite its proximity, the US hasn’t stepped in to provide humanitarian aid to the civilians at Rukban — many of whom are the families of its partner forces. US officials have expressed concerns that doing so would open the door to a long-term commitment.

“I understand there is the fear that if we feed them once, we own them. That’s simply not true,” said Moustafa. “The Russians, Assad regime, ISIS [Islamic State] all use the horrible humanitarian situation in Rukban to undermine the United States presence at al-Tanf because they want to see us leave.”

Just last month, Russia and Syria’s so-called reconciliation center issued a statement accusing the Americans of using Rukban as an “assembly line for training extremists” while at the same time preventing the civilians there from receiving coronavirus treatment.

Displaced people living in camps across Syria, who lack the luxury of social distancing and the soap and water needed for safe hygiene practices, are among the most vulnerable to a coronavirus outbreak.

In opposition-held Idlib province, home to more than 1 million displaced Syrians, there is just a single machine to test for the virus. The situation isn’t much better in the Kurdish-held northeast, where the only testing facility was rendered out of service during Turkey’s military operation in October.

Government-held areas have reported 33 cases and two deaths tied to the coronavirus, though experts say the number is probably far higher than the Syrian regime knows or will acknowledge.

Without disinfectants on hand, residents in Rukban have resorted to using chlorine and apple cider vinegar to clean their tents while praying that their extreme isolation will prevent the virus from reaching them.

“We are far from people and from the outside world and deprived of everything,” Abu Saeed said. “Nobody cares or even thinks about us.”