As Israel fails to fulfil its part of the truce understandings and in light of Qatar's alleged refusal to increase and renew its financial grant to the Gaza Strip, tensions have resumed between Israel and Hamas. 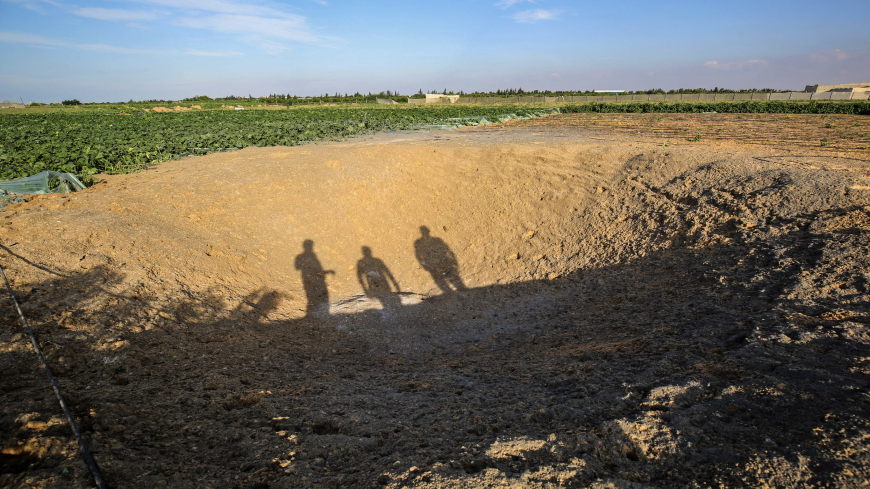 Palestinian men look at a crater at the site of an Israeli airstrike in Khan Yunis the southern Gaza Strip, Nov. 22, 2020. A rocket was fired at Israel from the Gaza Strip on Saturday, Nov. 21, in the evening, the army said, shortly after warning sirens sounded in the southern Israeli city of Ashkelon. - SAID KHATIB/AFP via Getty Images

GAZA CITY, Gaza Strip — On Nov. 15, Israel shelled a number of Hamas positions in the Gaza Strip in response to the launch of two rockets from the Strip toward the city of Ashdod in southern Israel.

Tensions have resurged between Israel and the Hamas movement after the latter accused Israel of failing to implement the truce understandings reached in October 2018, including lifting restrictions on imports for Gaza infrastructure projects.

The deadline given by Hamas to Israel to implement the understandings expired on Nov. 1 without Israel making any step forward. Meanwhile, Israeli media reported on Nov. 15 that Qatar refused to commit to Hamas to increase the monthly financial aid it provides to the Gaza Strip.

Qatar grants around $17 million per month to the Gaza Strip. This amount is allocated to infrastructure projects, temporary employment and the purchase of industrial fuel for Gaza’s only power plant. The amount also includes financial aid of $100 to 100,000 poor families in the besieged enclave.

Meanwhile, Israeli i24news TV reported on Nov. 15 that Hamas is demanding an increase of the Qatari financial grant from $17 million a month to $30 million and that it be renewed for a full year. Qatar refused to commit amid fears that Hamas would escalate the situation on the ground with Israel, the channel reported.

Hamas leader Hamad al-Raqab told Al-Monitor that his movement’s leadership in Doha is in constant contact with Qatari officials regarding the financial aid aimed to alleviate Gazans’ difficult humanitarian and economic conditions in light of the Israeli blockade ongoing for 12 years and the coronavirus pandemic.

Raqab neither confirmed nor denied the news reported by the Israeli media about the Qatari grant, but he clarified that talks with Qatar do not usually happen through media outlets.

He said that Qatar has never failed to offer its financial and relief support to the residents of the Gaza Strip. “It always provided the Gaza Strip with its much-needed aid, including the financial grant provided every few months.”

With respect to the truce understanding that Israel has yet to implement, he argued that Hamas is claiming the rights that Israel should offer. “Hamas will not allow the residents of the Gaza Strip to be blackmailed and remain at the mercy of the Israeli blockade that affected all walks of life, including the health system recently crippled by the outbreak of the coronavirus pandemic.”

Hamas had threatened Israel more than once that it would not stand idle while the pandemic kills the residents of the Gaza Strip amid a shortage of ventilators and other medical supplies. On Nov. 17, the news website Dunia al-Watan quoted a UN official, whose identity was not revealed, saying that Hamas asked mediators to pressure Israel to allow the entry of 40 ventilators into the Gaza Strip.

A source close to the Qatari ambassador in the Gaza Strip told Al-Monitor on condition of anonymity that Hamas is demanding the renewal and increase of the Qatari grant for a full year in light of the difficult situation in the besieged enclave. “The matter depends primarily on Israel, which promised to look into Hamas’ demands,” the source said, explaining that the Qatari ambassador, Mohammad al-Emadi, has conveyed Hamas’ demands to Israel since the end of August.

According to the source, these demands include increasing the financial grant, extending it for a full year and showing progress in implementing the truce understandings. But Israel has yet to respond.

Furthermore, the source expected the pressure exerted by the mediators, i.e., Qatar, Egypt and Special Coordinator for the Middle East Peace Process Nickolay Mladenov, to defuse the tension and pressure Israel to provide more facilities for the residents of the Gaza Strip, including allowing the entry of more respirators and medical supplies.

On Nov. 12, Yediot Aharonot reported that Israel is exploiting its relations with Qatar to provide a monthly grant of $30 million to the Gaza Strip until the end of this year only. This falls within the scope of a series of economic facilities Israel is discussing with Egypt and Qatar to alleviate the humanitarian and economic situation in Gaza, according to the paper.

Talal Okal, a political analyst and writer for the Palestinian al-Ayyam newspaper, told Al-Monitor that the renewal or increase of the Qatari financial grant is linked to Israel, which controls the entry of funds to Hamas in the Gaza Strip. He explained that Israel is using this situation as a pressure card against Hamas to force it to control the security situation along the border between the Gaza Strip and Israel and to prevent the factions from launching rockets.

Okal believes the security situation between Hamas and Israel would deteriorate if the latter did not agree to renew and increase the Qatari grant for the next year and did not allow the implementation of humanitarian projects, pointing out that Hamas and the factions cannot accept the calm for calm equation Israel is trying to impose on the Gaza front.

A political analyst close to Hamas speaking on the condition of anonymity said Israeli media leaks about Qatar's refusal to increase the Qatari grant aim to pressure Palestinian factions in the Gaza Strip to maintain the state of calm that prevailed in recent months along the border with Israel.

The source told Al-Monitor, “By playing the Qatari grant card, Israel is risking to make the situation on the ground explode again in light of unprecedented levels of poverty in the Gaza Strip due to the blockade and the coronavirus pandemic.”