Qatar has agreed to renew its grant to the Gaza Strip despite reconciliation with Saudi Arabia, the United Arab Emirates and Egypt, which previously requested Doha cut ties with Hamas. 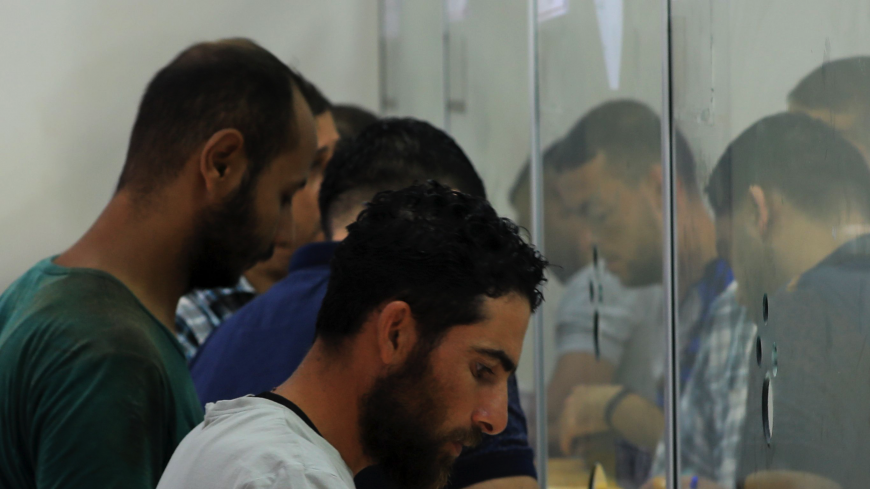 Palestinians receive their financial aid, 100 USD per needy family offered by Qatar, at a post office in Gaza City on June 27, 2020. - MAHMUD HAMS/AFP via Getty Images

GAZA CITY, Gaza Strip — Qatar’s Emir Tamim bin Hamad Al Thani has agreed to offer a new grant to the Gaza Strip, in response to the calls and efforts of Hamas’ politburo chief, Ismail Haniyeh, who met with the emir Jan. 10 in Doha to congratulate him on the Gulf reconciliation.

In a Zoom meeting Jan. 12 with the local newspaper, Felesteen, head of Hamas’ International Relations Office Mousa Abu Marzouk said, “The emir of Qatar, Tamim bin Hamad Al Thani, informed us of the renewal of the Qatari grant for a year, instead of six months.” He said the monthly amount provided for the Gaza Strip as part of the grant will go up to $30 million from a previous $25 million grant.

The Qatari grant, which has been renewed every six months since October 2018, was Doha’s contribution to the de-escalation efforts between Hamas and Israel, which at the time included Israel’s approval to implement humanitarian and economic projects in the Gaza Strip and the easing of the blockade in exchange for halting the weekly Great Return marches.

Qatar’s decision to renew its grant to the Gaza Strip came days after reconciliation between Qatar, Saudi Arabia, Bahrain, Egypt and the United Arab Emirates.

Since the Gulf diplomatic crisis and the boycott of Doha erupted back in 2017, Qatar was asked to meet 18 demands, including the expulsion of Hamas leaders and the halting of financial support to the movement, in return for restoring diplomatic relations with the four Arab countries — something Doha refused from the start.

Abdel Latif al-Qanou, Hamas’ media spokesman in the Gaza Strip, told Al-Monitor that Hamas’ presence in Qatar and Doha’s financial support to the coastal enclave was not affected during the Gulf crisis or after the reconciliation, stressing that Hamas is keen on maintaining good and balanced relations with all Arab countries.

Qanou expressed his hope that Gulf reconciliation would be a support lever for the Palestinian issue, and he welcomed the new grant by the emir of Qatar.

A Hamas official who asked not to be named told Al-Monitor that part of the discussions the Hamas leadership is conducting with officials in Doha are based on Qatar’s contribution to Gaza Strip public employees' salaries, notably health and education employees, in a bid to alleviate the crisis of the government staffers who have been receiving 40% to 50% of their incomes for years.

He pointed out that the discussions have been going well and advancing toward this direction, but they need further deliberations with Qatari officials.

Mohammed al-Emadi, Qatar’s ambassador to the Palestinian Authority (PA), has been working on transferring the grant funds on a monthly basis in moneybags. Emadi and his assistants supervise the distribution of these funds to 100,000 poor families in the coastal enclave at a rate of $100 per month for each household. This is in addition to implementing some infrastructure and service projects and purchasing fuel to run the only power plant in the Gaza Strip.

Prior to Hamas’ announcement of the renewal of the grant, activists in Gaza Jan. 9 launched incendiary and explosive balloons toward the Israeli Kibbutz settlement near Gaza in a message to Israel and the mediators in the truce efforts to allow the renewal of the Qatari grant.

An official with Qatar's National Committee for the Reconstruction of Gaza who asked not to be named told Al-Monitor that Emadi is expected to arrive in Gaza in late January to inaugurate the committee’s headquarters in east Gaza City, at which time he will announce the details of the new grant and disbursement procedures.

Despite Qatar’s contributions and help in alleviating the poor economic conditions of Gazans, Doha continues to face criticism from the PA and the PLO.

Nabil Amr, a member of the Palestinian Central Council, said in an article published in Maan News Jan. 14 that the Qatari funds hide behind a humanitarian aspect but are in fact politically motivated, as they are passed to Hamas after the Israeli approval of Emadi’s entrance to Gaza.

A Dec. 29, 2020, article in The Jerusalem Post considered that “close coordination between Israel and Qatar to facilitate sufficient funding for Hamas to keep Gaza’s economy from collapsing will likely be the key to moving Doha to a normalization deal.”

The article added that normalization between Qatar and Israel is more likely with US President-elect Joe Biden taking office.

Tayseer Muheisen, a professor of International Relations at the Islamic University of Gaza, told Al-Monitor that Qatar’s approval to renew the grant to Gaza was a message of its continued support for the Palestinians and that Doha’s relations with Hamas will not be affected by the Gulf reconciliation. This is especially true in light of Hamas’ tense relations with the countries that boycotted Qatar — notably Saudi Arabia, the UAE and Egypt.

Muheisen explained that Qatar’s support for the Gaza Strip has never stopped, even with the outbreak of the Qatar diplomatic crisis. He expected Doha to go a step further in supporting Gaza and start contributing to the salaries of public employees who were hired by Hamas during its rule since 2006 when it won the legislative elections. The employees number over 40,000.

For his part, Mustafa al-Sawaf, a political analyst and former editor-in-chief of Felesteen, said the renewal of the Qatari grant is part of the truce understandings between Israel and Hamas to try and alleviate the humanitarian and economic crisis in the Gaza Strip.

Sawaf told Al-Monitor that the grant contributes — even to a minimum degree — in helping poor households buy basic necessities in light of the rampant poverty and unemployment resulting from the Israeli blockade and the coronavirus pandemic.