It looks like support is on the way for destitute Gaza via the UAE and Egypt. 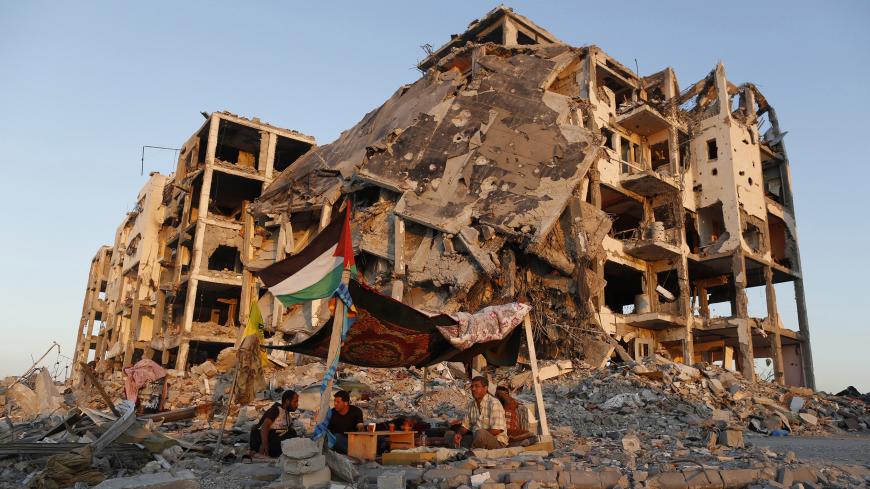 Palestinians sit in a tent outside their apartments, which witnesses said were destroyed in an Israeli offensive, during a 72-hour truce in Beit Lahiya, Gaza, Aug. 11, 2014.

RAMALLAH, West Bank — Hamas and Egypt are moving forward quickly on projects to aid the Gaza Strip. A delegation from the National Islamic Committee for Social Solidarity, along with officials from Egypt and the United Arab Emirates, will work with experts from both countries to oversee funding.

A solidarity committee source told Al-Monitor on condition of anonymity, “The Emirati-Egyptian committee will fund projects in the Gaza Strip and oversee them [at a total] of $15 million a month, paid by the Khalifa Bin Zayed al-Nahyan Foundation [in the UAE] for humanitarian work." The source noted that several sectors will be targeted, such as health (buying medication and treatment abroad), housing (building residential apartments) and electricity.

Hamas political bureau member Salah Bardawil told Al-Aqsa TV on Aug. 22 that 17 projects have been approved and the UAE will offer the aid through Egypt.

Egypt and Hamas recently developed an understanding by which they will build a security buffer zone on Gaza’s borders, indicating growing cooperation. Hamas also has been open to overtures from dismissed Fatah leader Mohammed Dahlan, who is close to Egypt and the UAE.

Conflict between Fatah and Hamas, the two main Palestinian political parties, split the Palestinian Authority (PA) in 2007. Now, Fatah — led by PA President Mahmoud Abbas — controls the West Bank, and Hamas administers operations in the Gaza Strip. Abbas and Dahlan were once close associates but now are sworn rivals.

Under the new arrangement with Hamas, the UAE will offer Gaza a package that includes mainly inaugurating a power generation station that will take 18 months to build, at a cost of $100 million. A launch date has not been set. The aid will also include funding to restore and maintain the Rafah land crossing between the Gaza Strip and Egypt.

Palestinian Legislative Council member Majed Abu Shamala, who heads the National Islamic Committee for Social Solidarity, told Al-Monitor, “We have agreed that Egypt will play a key role to facilitate the entry of aid to the Gaza Strip, just like the case with the industrial diesel." He was referring to Egypt allowing trucks carrying industrial diesel to supply Gaza’s power station in June. Only a few technical measures have to be resolved before work can begin, he said.

“Egypt will firmly support the Gaza Strip with its essential needs," Abu Shamala said. "The National Islamic Committee’s mission is to spare Gaza the stage of collapse, especially after [Abbas] imposed sanctions on it, burdening all life aspects. We are working with the UAE and Egypt to avoid further ripples of the catastrophic situation resulting from Abbas’ arbitrary measures against Gaza.”

The Egyptian regime is seeking to restore calm in the Sinai through the security cooperation with Hamas and to return Dahlan to the Palestinian political arena, all the while trying to foil Abbas’ measures against Gaza.

Animosity flared between the PA and the UAE after Dahlan was dismissed as Fatah leader in 2011 and escaped to the UAE to live. Abbas refused Emirati mediation to try to halt legal measures against Dahlan before he was dismissed and to reunite Fatah’s ranks.

Abu Shamala blames Abbas for the suffering in the Gaza Strip, since Abbas collects tax money and does not spend the funds of international aid on the Gaza Strip. Abu Shamala said, “We will call on Arab states supporting the PA to force it to offer services to Gaza, just like it does in the West Bank.”

The UAE-Egyptian committee’s work appears to be upping the stakes in the Qatar crisis. The UAE, Egypt, Saudi Arabia and Bahrain have cut ties with Qatar, accusing it of supporting the Muslim Brotherhood and of being hostile toward Egypt. The UAE would like to quash Qatar's influence in Gaza, even though Qatar has long been a financial supporter. Qatar played a major role in supporting Hamas by funding social, health and economic projects. In January, Qatar paid around $12 million to alleviate the power crisis in Gaza and build large residential projects like Hamad City. It also paid the salaries of Hamas employees and made other humanitarian donations.

Khaled al-Batsh, the leader of the Palestinian Islamic Jihad and a member of the social solidarity committee, denied claims that the UAE-Egyptian committee might seek political favors against Qatar in return for the UAE’s aid to the Gaza Strip. “The Emirati aid is important, but not huge. It is not a way out of the Gaza Strip crisis, which will only end when the [consensus] government reassumes its responsibilities in the Gaza Strip or when a national unity government made up of all Palestinian factions is formed," he told Al-Monitor.

“The dispute between the UAE and Qatar is strictly internal, and we are open to any state that wants to help the Palestinian people.”

The National Islamic Committee for Social Solidarity was formed in 2011 and includes representatives of five Palestinian factions in the Gaza Strip: Fatah (Dahlan’s party), Hamas, the Islamic Jihad, the Popular Front for the Liberation of Palestine and the Democratic Front for the Liberation of Palestine. The committee provides humanitarian aid to the Gaza Strip without regard for political disputes among factions.