A health care megaproject in the Gaza Strip funded by the UAE and implemented through the humanitarian Takaful organization has angered the Palestinian Authority for circumventing it. 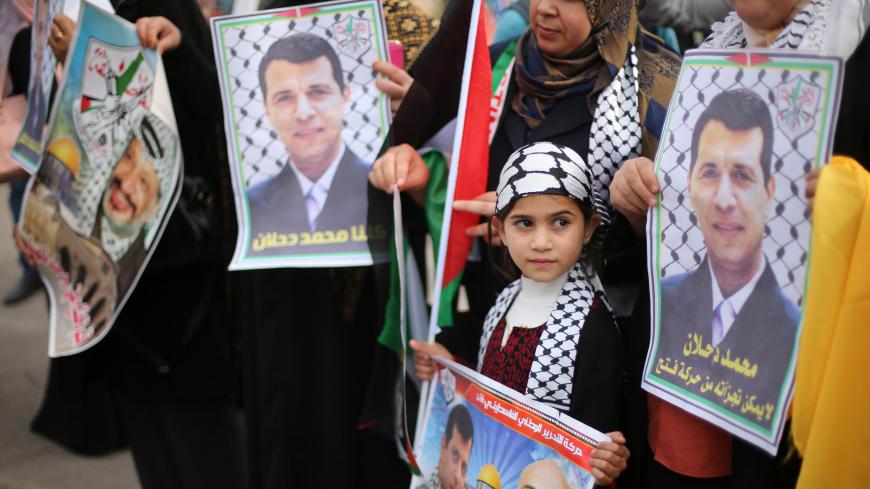 Palestinian supporters of Mohammed Dahlan hold posters of him during a protest in Gaza City, Gaza, Dec. 18, 2014. - REUTERS/Mohammed Salem

GAZA CITY, GAZA — The National Islamic Commission for Development and Social Solidarity (Takaful) announced the start of the implementation of a major health project in the Gaza Strip in a Nov. 29 press conference in Gaza City. The megaproject is funded and supported by the UAE Red Crescent Society.

Takaful is a humanitarian commission established in the Gaza Strip in 2013 by Fatah’s Reformist Movement in Gaza, founded by dismissed Fatah leader Mohammed Dahlan. Dahlan has been exiled from the movement since June 2011 and is currently residing in the UAE.

“This relief project is the biggest and the first of its kind in the coastal enclave and serves as an emergency resource to save the deteriorating health situation in Gaza, as the Palestinian Authority and government have been shirking their responsibility toward the Hamas-controlled Strip. This has caused a major health crisis with the lack of many medicines, medical supplies and equipment in medical institutions and centers in Gaza,” Jawad al-Tibi, head of Takaful medical committee, told Al-Monitor.

He explained that the megaproject is made up, of 10 different projects, including the disbursement of medicines and medical supplies for patients, especially those with chronic diseases free of charge, as well as providing the health sector and public hospitals with needed equipment and medical supplies. Tibi said the project will also provide financial coverage for surgical operations for poor patients including eye surgery and treatment for patients suffering from renal failure.

Tibi said that the project will also provide supplies for people with disabilities and special needs, such as wheelchairs, hearing aids, prostheses, shoes, orthopedic shoes and other consumable items such as adult diapers.

The project will cover low-income patients as well as university students, and will be implemented through public and private medical centers in the Gaza Strip.

Tibi thanked the UAE Red Crescent Society and the UAE for all their support for this relief project through Takaful.

The commission is headed by Majed Abu Shammala, a Palestinian leader who was dismissed from Fatah along with 34 other Fatah leaders in September 2017 by Palestinian President Mahmoud Abbas over their loyalty to Dahlan.

Takaful had previously conducted several relief and humanitarian projects for various Palestinian groups in the Gaza Strip. In August 2017, the commission offered financial assistance for Gazan workers, amounting to 200 shekels ($55) per person. In October of the same year, another project supported poor patients with special needs and in November, the commission helped pay off university fees to help poor graduates obtain diplomas withheld pending payment.

Because of the enmity between Abbas and Dahlan over organizational differences with the Fatah movement, Takaful’s projects do not go through the PA but are directly implemented in the Gaza Strip through Egypt or Israel, which have good relations with the UAE.

The Palestinian government insists that any aid to the Gaza Strip must go through the Ramallah-based government rather than directly to Hamas.

A PA official told Al-Monitor on condition of anonymity, “The PA is angry at the UAE over the project it is carrying out in the Gaza Strip through Takaful, affiliated with Dahlan, and not through the PA.”

The source added that the UAE funds the commission with $15 million monthly, noting, “The PA is currently reviewing the decision to freeze all financial assets of Takaful deposited in Palestinian banks, and to ban official and government institutions from dealing with it. This is because the commission’s work has political motives, not humanitarian ones.”

The official said the political objective behind these projects is “to pass the US 'deal of the century' that seeks the separation of Gaza from the West Bank and to undermine the legitimacy and sovereignty of the PA.”

The PA believes that any foreign aid sent directly to Gaza without any coordination with Palestinian government supports Hamas' control over the Strip and promotes the separation between the West Bank and the coastal enclave.

Hamas leader Yahya Moussa told Al-Monitor, “Dahlan and his current are doing humanitarian and not political work in the Gaza Strip. Their work aims to ease the Israeli siege imposed on Gaza and the sanctions PA President Mahmoud Abbas has been imposing on Gaza since 2017 to pressure Hamas.”

He added that Hamas “welcomes this role, and considers it a national position that goes in line with the stances of most Palestinian factions that reject the PA sanctions against Gaza.”

Political analyst and writer for the Palestinian Al-Ayyam newspaper Talal Okal told Al-Monitor that the aim of this project and previous humanitarian ones conducted by al-Takaful and backed by the UAE “is to mobilize popular support for Dahlan at the expense of Abbas in light of the differences between the PA and the UAE."

Okal explained, “The dispute between the two parties emerged following Dahlan’s dismissal from the PA and after the UAE welcomed him. As a result of the dispute, the UAE halted its direct support for the PA and offered support to Palestinians instead through UNRWA and Takaful, which was established by Dahlan."

Regardless of the conflict, the ongoing humanitarian work conducted by Takaful in Gaza is helping ease the harsh living, health and economic conditions in the besieged enclave. Many on the Palestinian street believe Dahlan will return to the Palestinian political scene in force after Abbas is gone and will be a potential presidential candidate.