Although officials say relations between former Fatah leader Mohammed Dahlan and Hamas are limited to aid provided by Dahlan to the Palestinians in Gaza, the shared enmity toward President Mahmoud Abbas shows otherwise. 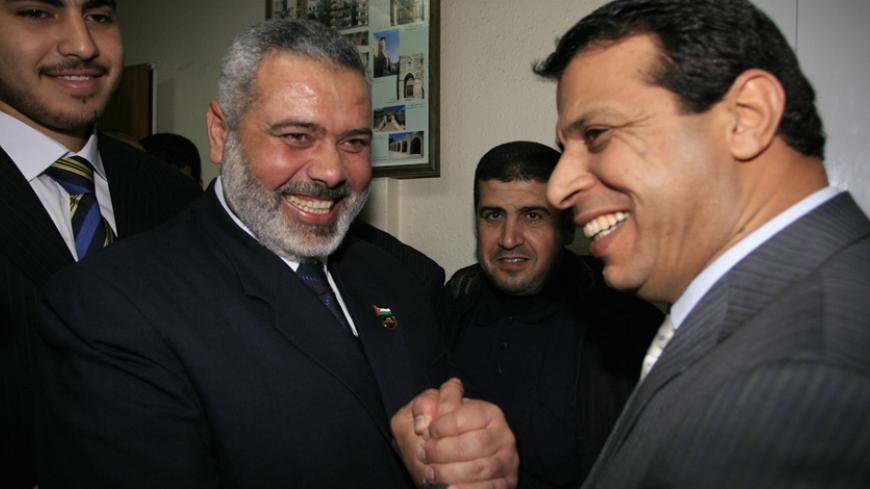 The evolving relationship between Hamas and dismissed Fatah leader Mohammed Dahlan raised questions in the Palestinian street about the depth of this relationship, the extent of its efficiency and how its serves the best interests of both parties. Meanwhile, the Islamic movement’s regional relations are witnessing bumps, and Dahlan’s ties are growing stronger with decision-makers in a number of Arab states.

Both sides refuse to declare publicly that there are political developments in the relationship between them. They rather confirm that their ties are only limited to the provision of help to Palestinians in the Gaza Strip through a social committee including members from Fatah figures close to Dahlan and members from Hamas.

However, the march organized against Palestinian President Mahmoud Abbas in December, during which posters of Dahlan were held by Fatah members loyal to him in Gaza City for the first time, opened the door again to suspicions that the relationship has evolved to more than just providing financial aid to the needy in Gaza.

Referring to Dahlan’s increasing humanitarian activities in Gaza recently, Haniyeh said, “We unconditionally welcome anyone willing to alleviate the suffering of our people.”

Fatah leader Ashraf Gomaa, who was dismissed for his support to Dahlan, denied any political relationship between Hamas and Dahlan, indicating that their relationship is limited to the distribution of aid to needy Palestinians.

“Dahlan raises funds and we, at the commission for social solidarity, distribute these funds to the needy," he told Al-Monitor. "The relationship does not exceed this scope currently.” He pointed out that Dahlan enjoys popularity in Gaza since he provides assistance to Palestinians while Abbas and others from the Gaza Strip failed to do so. “Who does not have political ambitions? Dahlan is entitled to aspire to any position. He's working to achieve this objective and this is his right.”

A Hamas source told Al-Monitor on condition of anonymity, “Dahlan and his supporters are allowed to conduct activities in the Gaza Strip, except for the formation of military and security groups.” The source added, “We have the right to form an alliance with any party. Dahlan is not prohibited from exercising [political] activity in accordance with the recent reconciliation agreement. He was part of the division and we are seeking to reconcile with everyone. Abbas rejects this reconciliation, while Dahlan accepts it.”

Dahlan has strong ties with decision-makers in the United Arab Emirates (UAE), Egypt and Saudi Arabia. These countries are hostile to political Islam organizations in the region.

Dahlan intervened with the Egyptian authorities for opening the Rafah border crossing in January, and securing facilities for the Gaza Strip. He posted on his Facebook page: “The opening of Rafah crossing to students, patients, Palestinians living abroad and holders of foreign passport is only a first step in a series of measures adopted by the Egyptian leadership during my recent visit to Egypt.”

It seems that doubts about the relationship between Dahlan and Hamas urged some Hamas leaders to hold a special meeting of Hamas’ political bureau to discuss the matter, according to Al-Quds local newspaper. Moreover, a circular was distributed to the movement members and leaders clarifying the nature of the relationship.

The newspaper quoted a source in Hamas as saying, “The meeting came at the request of Hamas leader Mahmoud al-Zahar, who requested Haniyeh to convene a meeting to discuss current developments, to facilitate Dahlan’s activities in Gaza and to allow the members close to him to organize rallies against President Abbas.”

During the same meeting, Zahar demanded not to use Dahlan as a means to improve the political situation of the movement in the region.

He called on the Hamas leadership, particularly abroad, to take steps toward improving relations with Iran, Hezbollah and Syria and to politically keep away from Dahlan to prevent him from gaining positions at the expense of his rapprochement to Hamas or scoring favorable political positions in the region that portray him as a key player in the Palestinian political scene after Abbas pulled the rug from under his feet.

The commission for social solidarity recently distributed funds provided by the UAE to the Palestinians wounded in the recent war of a value ranging between $500 and $1,500 for each victim, while families who lost one of their members in the war received $5,000.

The same source told Al-Monitor, “The commission was formed three years ago and with the help of Dahlan, it was able to raise funds from a number of countries, most notably the UAE.”

Hamas leader Salah Bardawil tried to shift attention from the rapprochement with Dahlan. He told a local news website on Feb. 8: “Dahlan is the enemy of Hamas on the one hand, and of Abu Mazen [Abbas] on the other, and that he wants to have a middle-ground position by using Arab funds to take control of the Gaza Strip with Egypt’s consent.”

Bardawil added, “Egypt would probably temporarily agree that Dahlan replaces Abu Mazen and then settles the pending issue between Dahlan and Abu Mazen.” He indicated that Abu Mazen and Dahlan have conflicted interests, but a common enemy — Hamas.

Hamas and Dahlan share rivalry toward Abu Mazen and it seems that their rapprochement is driven by their need for each other. Dahlan cannot work in Gaza without Hamas’ approval while Hamas seeks to exploit Fatah’s internal dispute to achieve political gains in light of its successive internal and external crises. However, this alliance based on current interests may be broken as a result of any regional change that may help either party overcome its crisis.